Steven Johnson explains an inflection point in economic, political, and human history with a tale of high crimes on the high seas. 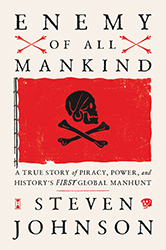 Enemy of All Mankind: A True Story of Piracy, Power, and History's First Global Manhunt by Steven Johnson, Riverhead

My family has started a new tradition while staying safe at home. At the start of each week, my wife, two kids, and I go around the table and tell each other three things we want to accomplish—one thing we want to learn, one chore we want to do to help keep the house clean, and one thing we want to do outside—over the next seven days. Because of Steven Johnson, I was able to tell them this week that I wanted to learn more about pirates and watch my kids’ eyes grow wide.

Steven Johnson has been a favorite author of ours for over a decade now, since his book Where Good Ideas Come from: The Natural History of Innovation captured our attention in 2009. He usually writes what I would say is a mix of popular science and economic history with a focus on innovation and technology, and has a special knack for helping us change how we see the world. The events in his books usually unfold nonlinearly, showing us how ideas and inventions are connected over time, and how human innovation is a result of our interconnectedness rather than of lone genius. He is also a master at challenging conventional thinking and underlying assumptions. His book Everything Bad Is Good for You, for example, makes the case that the increasing complexity of television programming and video games hones mental skills and provides cognitive benefits, an argument I’ve turned to more than once with my wife as we rely on screens more than usual to occupy and even educate our children while we work. (Not that we don’t still try to limit their screen time, but documentaries have become a crutch, and it may also be worth noting that doctors in the Victorian era wrote widely about how reading too many novels—now considered the height of culture and mental concentration—was deleterious to people’s mental health, which Leah Price wrote widely about in What We Talk About When We Talk About Books.)

But let’s get back to the pirates. Johnson’s new book begins in the Indian Ocean with a clash between a Mughal treasure fleet and a band of English pirates led by a man named (we think) Henry Every. It takes place in the era just prior to the “golden age” of piracy, and the events he describes not only turned a West Country lad into the most famous and wanted criminal on Earth, but helped inspire the generation of pirates that included Blackbeard and Calico Jack that came after him. But, as with all the stories Johnson tells, he weaves this one together by pulling in the backstories and broader historical developments around it that led to this precise, history-shaping moment. As he says:

It tells the story of the individual lives caught up in the crisis that erupted after the events of September 1695, but also the stories of a different kind of character, one step up the chain: forms of social organization, institutions, new media platforms. One of those institutions was as ancient as piracy itself: the autocratic theocracy of the Mughal dynasty. The others were just coming into being: the multinational corporation, the popular press, the administrative empire that would come to dominate India starting in the middle of the next century.

It is also the story of a fundamental, underlying economic change: the “shift from late feudalism to early agrarian capitalism” and its effects upon a population displaced by that shift. As we face similarly tectonic economic shifts today, Johnson has found a way to make this swashbuckling tale of seventeenth century piracy and global adventure feel as relevant to our times as the evening news—and less anxiety inducing, to boot—in this way and others.

As always, Johnson casts a wide net to catch a specific moment in time, so you’ll learn about much more than the pirates of the eighteenth century. It is also about the central role that Indian cotton—produced by an “artisanal Hindu society” and moved to the rest of the world by Islamic merchants and sailors—played in global trade. I’ve read many ponderings over the years as to why China did not beat England to industrialization, but I think Johnson is the first I’ve read to apply this inquiry to India. One of the reasons may be that, although it “ran what amounted to a thousand-year trade surplus,” the wealth that came from the trade in wool, gems, and spices went into lavish displays of wealth by that society’s elites instead of being turned into working capital to grow even more wealth. It was wealth that did lead to certain appearances, though:

At the high end of society—in the palaces, the royal gardens, all the outward appearances of wealth and civilization—India appeared to most European visitors to be the more advanced culture.

But that concentration of wealth may have undermined the creation of wealth over the long term and been a key factor in the lack of innovation in their economy. Johnson relates the staggering amount of the Grand Mughal’s treasure to us through the diary of William Hawkins, who arrived in India on a merchant galleon in 1608 and stayed in Agra as a representative not only of King James but of the East India Company, “the first joint-stock corporation in the history of human commerce.” That made him “a kind of emissary from the future”—a world in which the greatest stores of wealth were not royal families and palaces, but corporations. It was, in fact, the East India Company that would end up ruling the Indian subcontinent, not the British Crown.

But back, once again, to the pirates. The story is held together by the aforementioned Henry Every. It begins with an expedition stalled in Spain by bureaucratic red tape, a mutiny after two long months stuck in port, and a turn to piracy and adventure. It culminates in his lawless and barbarous attack on the Mughal treasure ship Gunsway, with all the rape and pillage and other crimes against humanity you’d expect in a pirate story. But it should be noted that, before this turn toward criminality, it is believed Every made his living largely occupied in the then still legal (and lucrative to the Crown) slave trade, and that the lines between outlaw pirates and gentleman privateers were blurry at best. The phrase “enemies of all mankind” was first used in a law drafted to go after the Barbary pirates that committed most of their crimes in international waters outside England’s legal jurisdiction (which also began a long line of legal precedent used in the US war on terror). But, even then, “Some of the most notorious pirates in the world,” says Johnson, “had been English, and had gone about their business with the full endorsement of the Crown.” One of the most famous privateers and travel/adventure writers of the day, William Dampier, was even a member of Every’s crew, though he left the episode out of his writings.

And for all their atrocities, the pirates were also innovators. As Johnson writes:

The pirates were vanguards as much as they were outlaws, building codes that ensured the collective strength of the ship and guarded against excessive concentration of both power and wealth. At the very time the multinational corporation was being invented, the pirates were experimenting with a different kind of economic structure, closer to a worker’s collective. Those economic and governance codes have led historians in recent years to reevaluate the place of the pirates, seeing them now not just as significant figures in the history of crime and exploration, but also as pioneers in the history of radical politics.

His attack and exploits made Every a celebrity among the working class back in England, popularized in both song and in the new broadside presses that were beginning to circulate the news (often delivered aloud in song) at the time. The attack also shifted the Mughal view of England itself and the East India Company, which it came to believe was more an invading force than trading partner. Seeing that it would soon take over and occupy India for two hundred years, it was not a mistaken view. Johnson shows how Every’s single act of violence began that shift in the balance of power that would end five centuries of Mughal rule over India and usher in the British occupation that would last two centuries more. He describes nothing less than the emergence of the nation state and the popular press as we know it today, and the birth of the modern multinational corporation—really, what has become the way the world is organized, how we are governed, and how wealth is made and distributed today. And he does it all with a tale of adventure and high crimes on the high seas. Oh, and I got to tell my kids I was reading about pirates this week, which they thought was pretty cool.