Marie Forleo's new book is a ray of sunshine—a breath of fresh air. 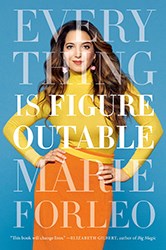 Everything Is Figureoutable by Marie Forleo, Portfolio

“The struggle is real,” writes Marie Forleo, “but it’s also understandable.” It’s also universal. And yet, we’ve all felt reinvigorated by a burst of warm sunshine, refreshed by a cool breeze. We don’t prejudge the sunlight or the wind when it comes again; we simply bask in it anew.

But we have a tendency when we come across an idea we feel like we’ve encountered before—a bit of knowledge, inspiration, or insight into our lives—to ignore it, thinking “I know this already.” Forleo believes this is one of two thoughts that are destructive to our own development when attempting to learn or do something new, pointing out that:

Knowing something intellectually is very different from doing something consistently, mastering it, and benefiting from it. [Be humble.]

The second destructive thought is that “This won’t work for me.” Both thoughts shut down opportunities for growth. Instead, we should take time to bask in the information, inspiration, or insight anew, asking “What can I learn from this?” and “How can this work for me?”

It is all a part of her philosophy that everything is figureoutable. It is a phrase she first heard spoken by her mother. Coming home from school as a child, she’d often find her mother doing things she never knew her mother could do—fixing the roof, retiling the floor, fixing her cherished Tropicana orange radio. Asking how she knew how to do so many things she’d never done before, her mother replied:

“Don’t be silly, Ree. Nothing in life is that complicated. You can do whatever you set your mind to if you just roll up your sleeves, get in there, and do it. Everything is figureoutable.

Forleo has inherited those words as her life’s philosophy, which she teaches in her new book of the same name. Her mother used it as a way to stretch money in a household that never seemed to have enough of it. Forleo has used it to launch a career as a “Multipassionate Entrepreneur,” and create a “multimillion-dollar, socially conscious education and media company from the ground up—with no clue, experience, investors, graduate degree, or connections.”

It is a philosophy of personal responsibility that doesn’t require us to ignore or stay silent about the historical or present injustices in our society. It is, in fact, through claiming our own power that we can begin to address and overcome them—in our own lives first, and in the community and world around us when we’ve figured out exactly what we want to do. It’s a philosophy that embraces the wisdom of our bodies and the importance of listening to “what happens viscerally and emotionally” when we hold an idea in our head, when confronted with the need to make important decisions about what specific something we actually want to figure out. On a larger level, that something we’re all figuring out is our very lives here on planet Earth.

Individually and collectively, we’re confronted by events and circumstances that can no longer be ignored. Political, social, environmental, and economic forces are upending life as we know it.

The struggle is real, but it’s also overcomeable. It is, as Forleo insists, figureoutable. Among the inspiring examples she shares in the book are Malala Yousafzai, whose attempted assassination by the Taliban for the simple act of going to school, only redoubled her efforts to champion education for girls in her country. There is the story of Laverne Cox, bullied daily as a child in Alabama to the extent that she attempted suicide in the sixth grade, but would go on to be the first trans woman to appear on the cover of Time magazine after winning two Emmys for her role on Orange Is the New Black. There is the story of a group of women in Liberia, led by Leymah Gbowee, who pursued peace so persistently, courageously, and intelligently that they ended the civil war there. But there are also stories from people you’ve never heard of, who used Forleo’s figureoutable philosophy to overcome loss, end abusive relationships, attain a higher education, build their dream business while battling cancer, and so much more.

Behind Forleo’s philosophy are the ideas that “The most powerful words in the universe are the words you say to yourself” and that “Beliefs are the hidden scripts that run our lives.”

Beliefs create behaviors. The cumulation of those behaviors add up to your entire life. … Belief becomes the source of your limitation or your liberation.

The catch is that many of our most powerful beliefs have been inculcated in us and remain unexamined—passed down from our family, our education system, and society at large. And changing those beliefs and behaviors requires not only thought, but action. It requires “Finding role models outside your immediate circle … to transcend your own limiting beliefs.” Those role models don’t need to be mentors. They can be friends and acquaintances. It requires writing down what’s most important to us—and looking back at it often. It requires picking one thing to focus on at a time, and focusing on what you can control. It requires starting before you’re ready (or before you think you’re ready). It requires confronting the perils of perfectionism, and cultivating patience. It requires learning the difference between being defensive and becoming even more determined in response to haters. It requires learning the importance of being persistent in forging change, even if you’re seen as pushy in its pursuit:

While I believe everyone should question the rules and challenge the status quo, this is especially crucial for women. We’re battling a culture that’s worked to shame, silence, and control us for millennia. Many of us have been conditioned since birth to suppress our desires, curtail our strengths, hide our power, deny our emotions, and be “nice.”

It’s a good reminder that, while connecting to yourself and setting goals is important, ultimate success also requires connecting to something larger than yourself and pursuing goals beyond your own. “Purpose fuels persistence,” Forleo insists, “Motives matter.”

Yes, the struggle is real. But, as the opening track on Blackalicious’s album Nia states:

Sprinkled throughout the text are lessons that teach the reader about confirmation bias, opportunity cost, and loss aversion, but it’s not meant to give us an academic understanding of the issues, necessarily. Instead, it is geared toward action: “Action is the antidote to fear. Action metabolizes it. The trick is allowing yourself to feel fear while you take action.” “Clarity comes from engagement, not thought … Action is the fastest and most direct route to clarity.” “Action sparkes courage, not the other way around.” The book repeats the best themes over and over again, attached to a multitude of situations. It’s all by design, because:

Repetition is a key principle in neuroplasticity. It’s how we rewire our brains and turn good ideas into permanent new ways of being and behaving.

Like life, the figureoutable philosophy is a spiral path.

And here’s the thing about it all:

Even if this entire book is bullshit, can you think of a more empowering or pragmatic philosophy to embrace? Can you imagine a more useful and supportive belief that everything is figureoutable?

Marie Forleo’s new book offers a ray of sunshine, photosynthesizing the best ideas, bits of knowledge, inspiration, and insight into our lives, and a refreshingly cool breeze of honesty and authenticity blows throughout her 304 pages explaining exactly how everything is figureoutable. Just bask in it. And then put it into action. 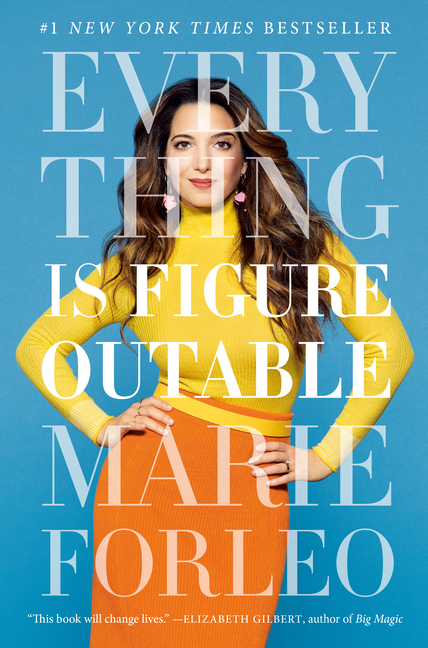