Fiber: The Coming Tech Revolution—and Why America Might Miss It

Susan Crawford's new book makes the case that upgrading American homes to fiber optic cable connections is not only a business and economic imperative, but a critical social justice issue as well. If you know anything of the glass company Corning, it is most likely for the floral-patterned CorningWare that grace just about every cupboard in America. But you likely use other Corning inventions far more often in your everyday life and work. You see, Corning is a company that has maintained a heavy investment in research and development, putting 10 percent of all profits back into R&D, that has become rare among American companies today. That investment has led to the invention of both the glass used on your smartphone, and the fiber optic cables that carry the data that comes to it around the country and around the world.

Unfortunately, if you live in the United States, it is not very likely that such fiber optic cables carry that signal all the way to your home. (Most of us rely on copper DSL or cable lines.) And, according to Harvard Law School professor Susan Crawford, that is a huge problem, because communications and data move much faster, and can be carried at nearly unlimited capacity, over fiber optic cables.

Crawford's new book, Fiber: The Coming Tech Revolution—and Why America Might Miss It, doesn't make the explicit case to break up monopolies that is found in Tim Wu's Curse of Bigness, or that The Myth of Capitalism: Monopolies and the Death of Competition by Jonathan Tepper and Denise Hearn makes, but the problem of monopolies is very much at the heart of the book—as it was her last book, Captive Audience: The Telecom Industry and Monopoly Power in the New Gilded Age—because the answer to why America might miss the coming tech revolution is largely, well, because of monopolies.

“Cable companies have steadily merged and swapped systems so that they control entire markets,” writes Crawford, “and never enter each others’ territories.” And because of that lack of competition, there is little incentive to provide the best service possible—as anyone who has spent time on the phone with a cable or telecom company is well aware of. Put simply, it means we have slower connections and pay higher prices for it.

Although several countries have made installation of FTTH [“fiber to the home”] an industrial policy priority and have steadily upgraded their “last-mile” networks, a series of federal- and state-level policy missteps over the past ten years has left America with awful fiber adoption. The completely deregulated private companies on which we depend for wired communications have systematically divided markets, avoided competition, and established monopolies in their geographic footprints. The results are terrible: very expensive yet second-rate data services, mostly from local cable monopolists, in richer neighborhoods; the vast majority of American unable to buy a fiber optic subscription at any price; and many Americans, particularly in rural and poorer areas, completely left behind.

And while this may sound like a decidedly “first-world problem,” it has serious implications for the health of our economy, and even the state of our democracy. Crawford likens the present moment to that of early electrification in the industrial age:

Fiber plus advanced wireless capability is as central to the next phase of human existence as electricity was a hundred years ago. Just as countries that quickly ensured cheap access to electricity revolutionized their economies and provided dramatically improved quality of life for their citizens, countries that figure out how to get fiber to everyone will have ever-increasing advantages over those that do it slowly.

And we have been lagging behind. “The United States ranks twenty-sixth out of forty countries in the Organisation for Economic Co-operation and Development (OECD) in average download speed” writes Crawford, and “pay more than people in all but six other developed countries.” The divide between those of us who live in America is just as bad, in both terms of service and cost:

We suffer from a whole series of digital divides as a country. On the global stage, there is a deep and widening divide between the United States on the one hand and Japan, South Korea, Singapore, Hong Kong, and China on the other. Those places, where fiber now reaches or soon will reach all residents, are where new industries and new ways of making a living are likely to emerge first.

We also suffer from huge digital divides between richer and poorer Americans that will make inequality worse and weaken the fabric of democracy. These infrastructure divides are driving wedges between rural and urban Americans and between white and nonwhite Americans. All the policies important to us as a country—becoming the most advanced health care nation in the world, the most energy efficient, the most innovative, the most resilient—depend on having last-mile fiber and advanced wireless services available cheaply to everyone. We must do better.

The bright side of the story is that upward of 500 municipalities across America are doing better. Crawford began her investigation into how “virtually unlimited, cheap, ubiquitous communications capacity” affected human lives and communities overseas in places like  Stockholm, Sweden, and Seoul, South Korea where such connectivity already exists. But she also found brave localities in America—from Chattanooga, Tennessee to Santa Monica, California and Winthrop, Minnesota to Wilson, North Carolina—who have built out their own municipal fiber networks directly into people’s homes. They operate on several different business models, but each maintains local control and local customer service, with the added benefit that the money spent by the users of these networks stays local, and even contributes to government coffers. Crawford makes it clear that widespread fiber connectivity is a source of economic power. She explains how cheap, ubiquitous connectivity has profound implications for education, health care, and even agriculture.

Much of the future of agriculture will be data-driven, with sensors relaying data about moisture levels in the soil and other critical crop information to farmers, and rural areas have the worst access to communications networks. Haptics and VR/AR devices can provide “hands-on” education and training to any person, anywhere. Telemedicine will “vastly reduce the country’s spending on hospital and in-office care.” Fiber connectivity has the potential to alleviate problems ranging from old age and isolation, lack of opportunity, and economic inequality.

Crawford discusses how Chattanooga still faces profound economic and racial inequality, but there are now discussions about it that were absent before. City leaders believe that with better physical infrastructure in place, they can now turn their attention to serving systematically disadvantaged people in a post-manufacturing future. Without the infrastructure of fiber, they believe, those discussions would not be happening. The “broad-based planning, rebirth, renewal, and opportunity creation” that is spurring those conversations and initiatives in Chattanooga is absent in similarly situated cities without such infrastructure. She also shares the story of Wilson, North Carolina, which offers fiber service to public housing residents for $10 a month, and the story of an African American single mother of three teenage boys that says it is the best thing that could have happened to her—allowing her to work toward certification in medical technology and phlebotomy from her home. Her sons’ grades have also improved since they were connected. She isn’t claiming fiber connectivity is a panacea for all our problems, but she does assert it is now a basic requirement for social justice.

By itself, fiber won’t fix the staggering, interlocking problems of inequality that America confronts, but without fiber we stand little chance of taking on inequality at all. And if we do not address inequality, we risk the future of liberal democracy, in which responsible, self-governing people are committed to everyone’s individual freedom. Every policy choice that will support liberal democracy—adequate education, health, transit, and employment opportunities, which together make an informed and engaged citizenry—requires the bedrock of fiber everywhere, reaching every home and business, in order to be effectively and fairly implemented.

But building out fiber networks is not easy, both because it requires significant upfront investment (even cash-flush Google investors “found fiber too capital-intensive for their tastes”) and because of successful lobbying efforts by cable and telephone companies, along with the American Legislative Exchange Council (ALEC) that has led to around twenty states making it nearly impossible, and often illegal, for municipalities to build out their networks. Telecommunications companies like AT&T and Verizon actually promised to upgrade to fiber if they were no longer regulated as utilities, which they successfully lobbied for—arguing that competing cable companies were not regulated as such—but they never actually made the investment to do so once they were free of those regulations.

The book provides a very thorough technical understanding of the issues, too, and why physical fiber lines are still so important in an increasingly wireless world:

Fiber and wireless are complementary technologies. Saying “the future is wireless, who cares about fiber” is like saying we can have airplanes without airports—those wireless signals need a wire in order to travel any real distance.

“It may sound paradoxical,” says Crawford, “but the future of wireless service depends completely on how much fiber is in place.” Not only that, but about “80 percent of the cost of fiber is labor, so we’ll be putting a lot of people to work to get this done.”

What we need, she believes, is a national leader to champion this vital infrastructure in the way Lincoln did the railroads, in the way FDR and the New Deal did for electrification, and the way Eisenhower did for the federal highway system—turning it into a national priority. It doesn’t look good at the moment, when the big, expensive infrastructure project our current president has shut down the government over is a wall. But the “500 five hundred brave cities in this country are way ahead of the national trend” offer a promising and informative example to others that want to follow their lead. That said:

The most important thread of all, however, runs invisibly through these stories. It has to do with a shared understanding of the role of government in widely shared infrastructure that encourages both economic growth and social justice. It also has to do with accepting the appropriateness of joint efforts when the market, left to its own devices, will not produce the desired result.

Leaving it up to the private sector, Crawford believes, will likely continue to leave us with “gross disparities in distribution, as with electricity in the 1930s, when 90 percent of farmers didn’t have it.” The fact of the matter is that the monopolization of our communications industry is stifling economic potential and worsening inequality. Each American deserves equal access to information, and the big cable and telecom companies simply are not only providing it, they are lobbying successfully for laws that prevent your local government from stepping up to do so.  “American democracy requires that these localities thrive,” insists Crawford, “and for this to happen, each community (and eventually the country as a whole) needs to reach the post-bandwidth era.” Getting fiber to our homes is as important in the twenty-first century as getting electricity to homes was in the twentieth century. Providing Americans homes cheap, ubiquitous communications infrastructure with virtually unlimited capacity is well within our reach. And it is not only a business and economic imperative, it is a critical social justice issue as well. 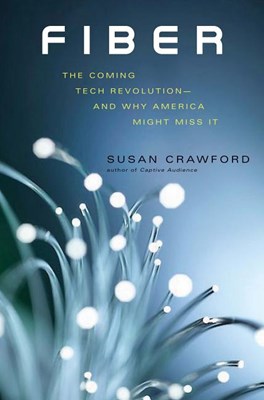 Fiber: The Coming Tech Revolution--And Why America Might Miss It