Framers: Human Advantage in an Age of Technology and Turmoil

Being able to frame the problems we face as sentient beings in an often hostile world has been a key ingredient in human evolution, and may still be the most important ability we have today. 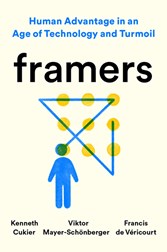 Framers: Human Advantage in an Age of Technology and Turmoil by Kenneth Cukier, Viktor Mayer-Schönberger, and Francis de Véricourt, Dutton

Hyperbole is big in the business book category, but the subtitle Viktor Mayer-Schönberger and Kenneth Cukier put on their 2013 book, Big Data, stating that it would be “A Revolution That Will Transform How We Live, Work, and Think,” has been proven out—and then some. Theirs was one of the first, and still one of the most prescient, books on the topic. We found it to be amongst the best books of that year, but it’s safe to say in hindsight that even those of us who touted it then (it was also shortlisted for the FT award) underestimated its importance. If more people paid it more heed over the past decade, it’s possible the threats Big Data posed and produced could have been mitigated some, while retaining the more substantial benefits it provides. Perhaps we can still make that happen, if we can reframe how Big Tech and Big Data operate in our society.

Luckily, Cukier and Mayer-Schönberger have now authored a new book with Francis de Véricourt that can help us with that task. Framers is not a book about Big Data, but about how human beings process data—about how we understand the world, define reality, and make decisions. They share a quote from the Talmud in the final chapter, that: “We do not see things as they are. We see things as we are.” That ancient wisdom matches the latest science that suggests we understand the world only so far as we understand (or imagine) ourselves and our place in it—that we don’t perceive reality directly so much as we interpret the world through our own mental models, by applying frames to the myriad inputs and stimuli constantly barraging our senses.

Being able to frame the problems we face as sentient beings in an often hostile world has been a key ingredient in human evolution, helping us focus on what’s most important to our own survival, apply what we’ve already learned to new situations, and adapt. It's an ability that gave us an advantage over the rest of the animal kingdom around us, and still provides one over the intelligent machines we have developed:

By deliberately trying out alternative frames, we go far beyond the animal that follows its instincts or the machine that adheres to its instructions. As we see the world from different vantage points, we enrich our understanding and come up with better solutions. In selecting a frame, we choose the path through which we eventually reach a decision.

It is an ability we too often undermine by adhering too strictly to dogma and familiar mental models. The extreme partisanship we’re witnessing today is certainly part of the problem, but so is what the authors describe as the divide between “The Machine and the Mob”—that is, between hyper-rationalists who would discard human decision making for data and algorithms, and “are tempted to bypass human framing for artificial intelligence” and emotionalists who would deny empirical evidence, the logical conclusions of experts, and rationality itself, and believe we should rely on our gut and instincts to guide us. The answer is not some magical mash-up of or compromise between the two, either, and “we aren't limited to these two options.”

We have at our disposal another strategy, a different human capacity that until now has been overlooked: framing. Our ability to apply, hone, and reinvent mental models provides us with the means to solve our problems without deferring to the machine or accepting the mob. The answer lies within us.

Framing helps us both simplify reality and envision other realities to work toward. Our frames don’t always fit, though, or lead to good outcomes, so we must be deliberate about those we choose. For instance, the rise of agriculture was made possible by humans reframing the question of how to best feed ourselves from nature’s bounty. But applying the frame of Lysenkoism to agriculture, the idea that “crops can be planted close together because, according to communist theory, members of the same class live in solidarity and do not compete for resources,” proved disastrous for the Soviet Union. It is just one example of the danger of dogmatic thinking and ideologically rigid frames, when what we need is cognitive freedom, mental agility, and the unique human ability to hold two opposing ideas in our heads (or body politic) at the same time to reframe the problems we face in new and novel ways. The lessons of history—from the rise and fall of empires, to recent economic and financial crises—warn us against accepting and operating within such singular frames. In contrast, the constitution the framers of our country came up with has proved successful so far, in large part because it is based on a compromise between two visions of government. Yet, the authors suggest, “We are still susceptible to monolithic thinking, convincing ourselves that past failures of single frames were due to the frame, not because it was singular.” While, in fact:

Uniformity of mental models is what crushes human progress. It makes people no wiser than automata that perpetuate the past, because they cannot see beyond the present. If our frames cannot coexist, how can we?

AI is being framed by many as a development on par with the agricultural and industrial revolutions. But it, along with the unintended consequences of both those previous revolutions, now constitute the most existential threats to our existence on this planet. When looked at over the long run, most humans live a much easier, more comfortable, and more pleasant existence than ever before, but we also face our greatest challenges as a species, and in order to survive we will need not only cooperation, but a new and diverse set of cognitive frames to think about and act on the problems in front of us. This book does not attempt to provide those frames, so much as it helps us develop better frames for ourselves, which may be the most important ability we have. 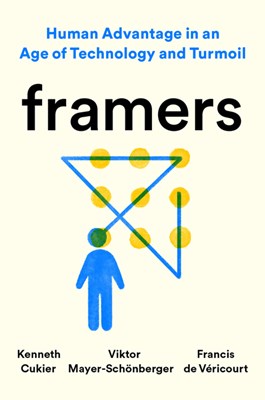 Framers: Human Advantage in an Age of Technology and Turmoil