A free press is foundational to a free society. We have gone too far in trading ours for the Silicon Valley notion that information wants to be free, even as Silicon Valley has built some of the world’s largest, most monopolistic corporations monetizing that supposedly “free” information. 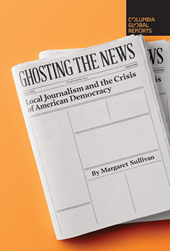 In the absence of a reliable federal source on the spread of COVID-19, especially early on in the pandemic, it has been left up to journalists to scour local sources of information, often local newspapers, to compile the data. The economic impact of this public-health emergency, however, is hitting those very same newspapers—already struggling to survive before the pandemic hit—extremely hard. It is a frightening reality that Margaret Sullivan sums up in her new book, Ghosting the News:

At the core, this book is about a once-profitable industry that was able to support an important public function but is now no longer profitable.

Craigslist was the first to hit newspapers’ profits, as the lucrative revenue stream that came from their classified sections disappeared. Google and Facebook came next, raking in the lion’s share of digital advertising revenue even as most of the content they profited off of came from traditional news organizations who still had the same costs associated with in depth-journalism but no longer had the ad revenue to support it. Amazon has compounded the problem. As more and more people shop online, the local stores that were once sources of advertising for local news outlets are also struggling to survive. Added up, this situation is grim:

With the online giants gobbling up the majority of digital ad spending, and declining circulation as people end their newspaper subscription and opt for news online, newspapers have had to resort to cutting costs however they can. And the primary way they have done that is through layoffs and buyouts, leading to reduced coverage and quality, and a diminished product even less people are willing to pay for.

Sullivan, who was the first female top editor of the Buffalo News before moving onto The New York Times and Washington Post, writes with poignancy about her experience as editor when the Great Recession hit and she was forced to make tough decisions about where to cut back.

There were no more staff-written movie or book reviews, no more daily “Life & Arts” section. The paper’s role as the center of the city’s cultural life was fading. After all, a newspaper’s purpose isn’t only to keep public officials accountable; it is also to be the village square for an entire metropolitan area, to help provide a common reality and touchstone, a sense of community and place.

John F. Kennedy once said that “The life of the arts, far from being an interruption, a distraction in the life of the nation, is very close to the center of a nation's purpose—and it is the test of the quality of a nation's civilization.” The same can certainly be said of the cities and small towns that make up the nation. But it is that prior purpose Sullivan mentions, “to keep public officials accountable,” that most imperils our democracy. As she writes:

The decline of local news is every bit as troubling as the spread of disinformation on the internet. […] Some of the most trusted sources of news—local sources, particularly local newspapers—are slipping away, never to return. The cost to democracy is great. It takes a toll on civic engagement—even on citizens’ ability to have a common sense of reality and facts, the very basis of self-governance.

And, as mentioned, it diminishes the ability of citizens to hold their elected officials accountable. Sullivan cites multiple studies that show, in the wake of local newspaper closures, government becomes less efficient even as its costs go up—highlighting the reality that local journalists really do hold their governments accountable. So what does it mean when there are less people doing that work, when:

American newspapers cut 45 percent of their newsroom staff between 2008 and 2017, with many of the deepest cutbacks coming in the years after that.

Beyond that, there are simply less newspapers to work for, and many places in America are turning into “news deserts,” with no local paper or one that has greatly diminished:

More than two thousand American newspapers have closed their doors and stopped their presses since 2004. And many of those that remain are mere shadows of their former selves.

One of the most dire consequences of these facts is that the career paths that once existed in journalism have been diminished. There are less newspapers at which to get a start, and less veteran reporters in those newsrooms to learn from after so many rounds of layoffs and buyouts. And less people (literally) working to hold government accountable means that government will be less accountable. As that happens, citizens trust government less and less, and are more likely to buy into disinformation and conspiracy theories they find for free—and freely spreading—online rather than investigative reporting that uncovers actual corruption and malfeasance.

Sullivan highlights the importance of national efforts like ProPublica, a nonprofit organization dedicated to investigative journalism and government accountability. But, in a place like Youngstown, Ohio, they are able to fund only one full-time investigative journalist there. The  town’s now defunct newspaper, The Vindicator, had a staff of forty. She shares the work of Alice Dreger, who started a brilliant site in East Lansing, Michigan, called ELI, to cover local government after the Gannett-owned East Lansing Journal cut its coverage. But it operates on a budget of only $100,000 a year and relies on the civic virtue of volunteer citizen journalists—140 community members, the majority of whom are women, who are now asked to do yet one more of our communities’ most important jobs without pay. And they have, uncovering a $200 million pension debt the city had kept secret and a mercury spill that had been covered up. Then there is Buffalo’s Investigative Post, started by James Heaney with the money from his Buffalo News buyout. Their reporting has led to not only investigations, but convictions on corruption charges of state officials and campaign donors, as well as the disbandment of a police unit they found was unfairly targeting the city’s minority residents. Sullivan provides many other sources of cautious optimism, of people continuing to do vitally important work for their community, but the models they are trying to build, whether based on digital subscriptions or nonprofit donations, are very far from certain to succeed, and the traditional business model local newspapers have relied upon has been upended completely. There are other possibilities, like Report for American, an effort to add young journalists entering the field into existing news rooms in a program akin to the Peace Corps, that are being discussed and implemented. I’ve myself often wondered how or if a public television and public radio model could be applied to print. What remains undeniably true is this:

In places where news breaks down, so does citizenship; where newspaper market share increases, so does political accountability.

A free press is foundational to a free society. We have gone too far in trading ours for the Silicon Valley notion that information wants to be free, even as Silicon Valley has built some of the world’s largest, most monopolistic corporations monetizing that supposedly “free” information. Quality journalism takes time and investment to produce, and it deserves our time and investment to preserve and appreciate. Our very democracy depends on it.