Gigged: The End of the Job and the Future of Work

Sarah Kessler writes of the rise and fall of the gig economy, with a nod toward what the future of work might look like and the choices we'll need to make and hard work we'll need to put in to build it. There is a county about an hour southwest of Milwaukee that is perfectly square. By “perfectly square,” I mean in its shape, not “unhip”—though perhaps it is that, as well. Sarah Kessler writes of this place and its work ethic, its working ethos, in the Preface to her new book, Gigged. It was in this place, where she grew up, that she learned that:

Becoming employable—not following dreams, seeking some sort of personal fulfillment, or whatever it is they tell kids in coastal states—was in itself deserving of respect and dignity. … Jobs just felt instinctively important.

I’m told that most millennials don’t feel that way, but I haven’t really met many people in general who don’t value stability and safety. Maybe what makes millennials different is that those things feel particularly elusive.

We’ve written plenty here over the years about the changing relationship between employer and employee, the end of any notion of loyalty between the two, and the fraying of the social contract that helped stabilize the postwar American workplace in the middle of the century after the more contentious relations around the turn of the century. We have not written quite as much about what seems to be replacing it—the so-called “gig economy.”

But Sarah Kessler has. She has been following its developments, and writing about it for various publications, before it even had a name. Perhaps more importantly, she writes about it from the perspective of someone who has graduated into it, who grew up in an economy in which having a steady job felt “instinctively important,” and entered a workforce where such jobs—and the safety and stability they offered—seemed to have disappeared.

Gigged is in some ways the culmination of her work to date—a professional dissertation on, and social history of, this shift following five workers involved in the gig economy, which provides a thick description of their lives within it: There is Abe, whose outsized ambitions to become a self-made millionaire led him to drive for Uber; Curtis, who takes his more scarce talents in software development to Gigster; Kristy took her Canadian work ethic and gumption to Mechanical Turk, a crowdsourcing site developed by Amazon that matches simple “Human Intelligence Tasks (Hits)” with “crowd workers”; Terrence, who believed his literal prayers had been answered when a representative of Samasource showed up in his rural Arkansas community hiring teachers for a new initiative, Samaschool, aimed at teaching those there to make a living in the gig economy; and Dan, CEO of Managed by Q, a company designed to bring the gig economy to those who worked in building maintenance and office cleaning.

In a culture that has elevated entrepreneurs to the level of rockstars, and made the role of employee feel more expendable than the groupies who latch on to them, it’s understandable that many aspire to be the former. But what felt like emancipation from the corporate world to some has become a simple necessity to others, and has turned into the utter exploitation of many. Most of the companies that rushed to become the “Uber” of any particular industry found that it soon had a revolt on its hands among those it contracted, and most were facing at least one lawsuit from them. Uber itself, which was facing 70 by the summer of 2016, was a case-in-point:

The gig economy had been born as a solution for the business problem of scaling a service business with venture capital. It had been promoted as a solution to economic woes. In 2014 and 2015, the gig economy started to look not like an innovation, but the continuation of a long change in how companies structured their workforce. Not a solution, but a problem in need of one.

Kristy, who took to doing tasks on Mechanical Turk after her husband had been laid off from his factory job, developed both physical ailments (a ganglion cyst, carpal tunnel, and a repetitive strain injury) and psychological ones incurred from encountering work of an emotionally damaging nature without warning. For example, she was assigned tasks such as one that asked her to tag photo stills from an ISIS training video that contained “a wicker basket full of human heads” and a slideshow containing “photos of animal abuse so graphic,” that even years after witnessing them, she “had trouble taking her dogs to the vet without crying.” Amazon, of course, does not offer health insurance or paid medical leave to those who perform the work on Mechanical Turk. Both she and Abe, who has turned his dream of making millions from Uber to real estate, attempted to organize resistance to the platforms they worked for among their fellow contractors.

Terrence found that much of his job teaching residents of rural Dumas, Arkansas, to make a living in the gig economy often involved teaching them how to spot which Upwork jobs were scams, and even when that could be accomplished, overcoming the systematic inequalities that carried over from the real-world economy to the gig economy could not be. Managed by Q eventually left the gig economy model behind and hired its former contractors as workers. But at least he and Curtis, the software developer who ended up making five figures a month for Gigster, ended up relatively ahead. As Kessler writes:

Yes, the gig economy could create opportunity for some people, but it could also amplify the same problems that made the world of work look so terrifying in the first place: insecurity, increased risk, lack of stability, and diminishing workers’ rights.

I have to admit a natural affinity for Sarah Kessler’s work, because of where she’s from. My three brothers and I are from that same square county she describes in the book’s preface. Fleeing the closing factories of Rockford, Illinois in the early 1980s, my parents moved us to a small farm there, where my mother could trade her practiced hand in the farm chores she grew up doing for rent, as my father found a new job. We moved to a village nearby a short time later, where we played little league next to a grain elevator that my mother now manages for a farmer’s co-op. Finally, we moved on up to the county’s main tourist town, where in the summer the license plates of Illinois tourists far outnumber those of Wisconsin natives. Kessler mentions in the Preface to the book a Kikkoman Foods factory in a nearby town, which turns the region's soy crop into soy sauce. That factory is 15 minutes from my parents’ home. (You’ll notice that we tend to measure distance by how long it takes to get from one place to another here.) I know well the smell she describes wafting from the Nestlé chocolate factory in another town nearby, because I played American Legion Baseball on fields in the shadow of it as a teenager, right outside of the gates of the town's annual Chocolatefest. I don’t know Sarah, but I think I understand why she would have the impetus to write a book dedicated to the humans involved in and affected by larger trends in the workplace, a book I think is as well-reported, and at times as emotionally wrenching, as Amy Goldstein’s Janesville (she gifts this book to Dan Teran, CEO of Managed by Q, near the end of the book) and Matthew Desmond’s Evicted. “Any economy is built by humans,” Kessler writes, “and this book is about them.” That is as undeniably true as the fact that this book is about so much more.

In the book’s Epilogue, we learn that even the most unambiguously successful person profiled in the book, software developer Curtis, signed an employment contract with SpaceX in 2016, bringing an end to his “vacation on a moment’s notice” lifestyle. Why would he give up that flexibility, that six-figure-a-month salary, and that freedom to work wherever and whenever they wanted?

The work SpaceX did seemed more meaningful than most of the startups he’d been exposed to, which worked on ways to serve online ads or advertised themselves as Uber for delivering pet supplies.

Of course, someone who worked full time building those services might find more fulfillment in it than a temp or gig worker. They might be more invested in finding ways to serve the customers as human beings rather than bots, bits, or blocks of work to be accomplished transactionally. And it’s also true that freelancing gave Larson the experience he needed to land that job at SpaceX, so this isn’t as simple as saying, “Gig economy bad, old economy good.”

But, as Henry David Thoreau wrote, “It is not enough to be busy. So are the ants. The question is: What are we busy about?” I suppose some may view the previous working order as unexciting, as perfectly square as the Wisconsin county we come from, but generations fought to make it a more square deal, as well—one that afforded workers a level of respect and dignity, safety and security that is generally lacking today. In facing the breakdown of that order, and the fraying of the social contract between employer and employee, Sarah Kessler's work in Gigged makes one thing increasingly clear: we must get busy building a new one that benefits all sides of that relationship, and the society around it. 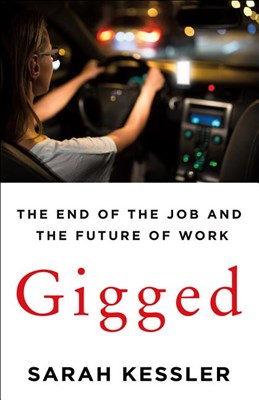 Gigged: The End of the Job and the Future of Work