Hit Makers: The Science of Popularity in an Age of Distraction

Derek Thompson’s new book is about many things, including the mysteries of beauty and goose bumps, but it is, at its core, about the commerce of culture and the how technology has altered the path to popularity over time. Derek Thompson’s new book, Hit Makers, is about many things, including the mysteries of beauty and goose bumps, but it is, at its core, about the commerce of culture and the how technology has altered the path to popularity over time. It is a book about the intersection of business and art, about the art behind business, and about the business of art. (It is also about the hook of the sentence structures I've used up until this point.) At the intersection of all of this is how popular products are spread and distributed:

It is not enough to study products themselves to understand their inherent appeal, because quite often the most popular things are hardly what anybody would consider the “best.” They are the most popular everywhere because they are, simply, everywhere. Content might be king, but distribution is the kingdom.

Thompson starts with the tale with Brahms’ "Wiegenlied" lullaby, which his mother sang to sleep with every night as a child. It forms the core of a deeply personal and impactful memory, yet is also one of the most-sung songs in the history of the Western Hemisphere. Wiegenlied was spread to the Americas in the 1870s by a wave of immigrants fleeing Germany, where Brahms was composing his best work at a time when “central Europe was a cauldron of chaos, war, and famine.” It’s popularity depended partly on its composition, which was entirely original while at the same time feeling familiar because it borrowed and combined elements from countless other familiar folk songs of the time. But it also depended on the migration of those people bringing that culture and that song with them.

Thompson traces the history of industrial design to tell us the story of Raymond Loewy, a French orphan and soldier in WWI who immigrated to the United States and fundamentally altered the commercial landscape of America by redesigning everything from refrigerators for Sears and trash cans and trains for Pennsylvania Railroad, to the iconic logos of Lucky Strike and the U.S. Postal Service. He eventually went on to redesign Air Force One and develop the original habitat for the first space station, whose porthole gave humanity one of our first glimpses back at Earth. But it all started travelling to the factories of the Midwest to explain his ideas for how to make their products more appealing:

His personal motto was that success is “25 percent inspiration and 75 percent transportation.”

He traveled many more miles in research once he received the commissions, visiting customers and learning their minds and preferences before designing products. And the results paid off, both literally—“Within two years, Sears annual sales quadrupled from 60,000 fridges to 275,000”—and in how it broadened his own thinking. He developed a concept called MAYA, the idea that people want the “Most Advanced Yet Acceptable” version of any product or design—bold but recognizable, advanced yet familiar. It is a concept Thompson will repurpose throughout the book in many forms, and what it boils down to is this:

Loewy understood that attention doesn’t pull in one direction. Instead, it is a tug-of-war between … the love of the new versus the preference for the old; people’s need for stimulation versus their preference for what is understandable. A hit is new wine in old oak, or a stranger that somehow feels like a friend—a familiar surprise.

This is the push and pull between fluency—our comfortable state of mind, in which we look for confirmation and reinforcement of our own beliefs—and disfluency, in which we take on new ideas that challenge or stretch our existing thinking. The key to popularity is in the space where these two meet, that “aesthetic aha” moment when disfluency yields to fluency, the moment we find the familiar and comfortable in a chaotic and crowded landscape.

People are complicated: curious and conservative, hungry for new things and biased toward the familiar. Familiarity is not an end. It’s just the beginning.

This might be the most important question for every creator and maker in the world: How do you make something new, if most people just like what they know? Is it possible to surprise with familiarity?

But how do you do that when the cultural landscape—even the mediums on and with which that landscape is painted—shifts so quickly? There was a time when the only screen was the silver screen, and it was the third largest industry in America. Disney built an empire on that screen. Today, just one piece of that empire, ESPN, “accounts for half of Walt Disney Company’s annual profit and more than its entire movie division.” And yet, among the key 18- to 34-year-old demographic, viewership of its staple show, SportsCenter, fell almost 40 percent in the first half of this decade. Where has that audience gone?

In an average week, ESPN delivers more than seven hundred million alerts to tens of millions of phones. When something big happens in sports, more than seven million people get a notification from ESPN in the pockets and purses; that’s more than ten times the typical SportsCenter audience.

Thompson is equally engrossing when telling this story as he is telling the long, slow march of Brahms’ "Wiegenlied" over oceans and down through the generations to reach his ears as a child in suburban Detroit. It is an enchanting journey that mixes the mirror of social science and a history of more recent cultural phenomena with an excavation of the cultural history that preceded and inspired it. It is also a book that reveals its own secrets, that tells you of the potentially manipulative nature of its own construction:

It is a convention of this book’s genre to build chapters like narrative Trojan horses, wheeling out a captivating tale to hide the scientific lessons within. I would be dishonoring the first lessons of this book if I tried to break too many of the genre’s conventions. But I would also be dishonoring the science of the book to not warn readers against putting too much stock in a great yarn.

And this is where we get into the dark side of how unconscious bias is spread in media. He focuses largely on how it relates to and reinforces gender bias, and why it’s so important we’re aware of what our children are watching:

Unconscious bias in media can spread like a disease: Moviemakers are the carriers, film is the vector, and kids are the victims. Watching too many female characters play lesser and subservient parts subtly teaches a generation of girls to apologize about being assertive. As generations of kids grow up in the glow of stories that say women can’t behave like men without being punished for it, those kids grow up to teach the next generation the same bad lesson, and the vicious cycle continues.

Hit Makers is an refreshingly deep dive into cultural markets and the media, and how it affects both our personal and professional lives. For instance, if you're worried about the current state of teenage life online, his chapter on “Rock and Roll and Randomness”—which includes the unlikely success story of Bill Haley’s “Rock Around the Clock” and the birth of rock and roll as a cultural phenomenon—should cure you of some of that worry. (It's also one of the best written and constructed chapters I've read in some time.) And his explanation of why things go viral, and the fact that they really don’t, will change the way you think about distributing content.

“We are living through an industrial revolution in attention,” Thompson tells us. But people still crave what Raymond Loewy intuitively understood and social science has confirmed people are drawn in by: something familiar in the surprising, and something surprising in the familiar. Hit Makers won't give you the perfect equation for popularity, but it paints a beautiful and true landscape of art and industry, increasing our understanding of the underlying forces at work while entertaining us with gorgeous writing and great storytelling. 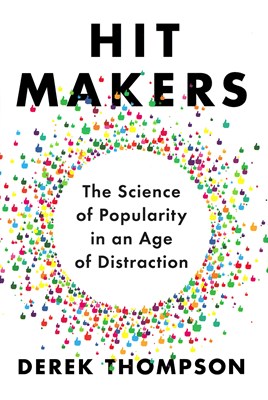 Hit Makers: How to Succeed in an Age of Distraction