How Women Rise: Break the 12 Habits Holding You Back from Your Next Raise, Promotion, or Job

Our businesses, and society, are better off with more women in leadership. Sally Helgesen and Marshall Goldsmith have written a how-to guide for women to seize those positions of power and influence. Sally Helgesen’s 1990 book, The Female Advantage: Women’s Ways of Leading, “was the first book to focus on what women had to contribute to organizations rather than how they needed to change and adapt” to them. Almost thirty years later, the value of women in business is backed up by reams of research, but the cultural reality inside most organizations still applies pressure on women to change and adapt their behavior to, as Joanne Lipman wrote in her book That’s What she Said, “fit into a professional world that was created in the image of men.” There is so much progress that still needs to be made. And yet, women can’t wait for that progress. They must exist in—and help change—these organizations as they exist today.

Perhaps the time is coming when women needn’t adapt their behavior to enter the professional world, but that doesn’t mean they won’t need to change their behavior at all. Marshall Goldsmith’s 2007 book, What Got You Here Won’t Get You There, was about how “the same behaviors that help people achieve high positions often undermine them” once they arrive there. The brilliance of the new book Sally and Marshall have written together, How Women Rise, is in the combinations of these two realities. As they rise within organizations, all leaders must change to overcome behavioral barriers that impede them from becoming even more successful. Of course, with a client base that is “typically about 80 percent male,” the behaviors Goldsmith addressed in his book are more common hazards for men, and women are likely to experience very different forms of self-limiting behavior:

For example, instead of claiming credit they don’t deserve, women are often reluctant to claim their own achievements. Instead of always needing to be right, women are more likely to be hobbled by the desire to please or the need to be perfect. Instead of refusing to express regret, women often can’t stop apologizing, even for things that are not their fault.

This is not to stereotype women or men. We all know people who don’t conform to these “norms” (if anyone truly does), but there are habits that we’re more likely to fall into as men or women for a whole host of cultural and biological reasons. What writing a book on the issue specifically for women acknowledges (other than the common bias to assume male tendencies and readership) is that women experience different challenges in the workplace, and men and women are rewarded differently for the exact same behaviors. That being true, “the behaviors that undermine women are often different from the behaviors that undermine men.” (The key word being often; not always.) Even the ways women define success are often different than men, which means a book about achieving it might need to be a bit different, as well.

Most of our behavior is habitual, but the circumstances that led to the creation of those habits have likely changed. It is not especially important, or fruitful, to attempt to root out the causes of why you behave in a certain way, but it is important to consider if they are still serving you well and to focus on what you can do differently if they are not. “To get unstuck, to let go of a behavior that is no longer serving you,” the authors insist, “you first need to recognize it as a habit.”

The authors' experience coaching leaders has led them to conclude that there are three beliefs that keep women stuck: Ambition is a bad thing; Being a good person means not disappointing others; and Women should always be role models for other women. These beliefs lead to twelve behaviors that undermine women at work:

The first thing to note is that Helgesen and Goldsmith are not in any way documenting these habits as a way to blame women for not reaching their full potential in the workplace. They stress that cultural and structural barriers continue to exist that hold women back. But they also know that there is a good chance that “culture and structure don’t lie within your control, whereas your behavior and habits do. So that’s the best place to start improving the quality of your life at work and your prospects for reaching your full potential.” And reaching your full potential is your best bet to rise in an organization so that you can have an impact of the broader culture and structure of your business.

The sad reality is that, if you’re a woman, you’re going to encounter bias (even if it is unconscious bias) along the way. You’ll experience it even at the hands of other women, and if you’re an African American, Latina, or Asian woman, those biases will be compounded, more insidious and intense. But women are also harder on themselves. Consider the example of Frances Hesselbein, a winner of the highest honor that can be bestowed upon a civilian in the United States, the Presidential Medal of Freedom, for her outstanding leadership of the Girl Scouts. While still with the Girl Scouts, she decided she could benefit from some coaching, which in itself is telling. Marshall used a 360-degree feedback process he had developed to interview others in the organization, and the feedback he received was overwhelmingly positive. But when he shared the results with Frances, her reply was, “I have so many things I need to improve!” A dose of humility is a positive attribute, especially important in leadership, but being overly self-critical is focusing exclusively on where you believe you’re falling short is not helpful. This illustrates a very important point:

The flip side of every limiting behavior is always a strength. Strengths such as empathy, humility, diligence, and reliability underlie many of the behaviors in this book.

For instance, the reluctance to claim one’s own achievements often occurs out of a desire to recognize the contributions of others and to raise them up. It’s a noble leadership trait, but it also deflects credit that is actually deserved, and may be necessary to your own advancement in the organization. “Speaking up about what you contribute and detailing why you’re qualified does not make you self-centered or self-serving,” the authors write. “It sends a signal that you’re ready to rise.” And once you do, you’ll be able to raise others up much more effectively! Effectively marketing yourself and your accomplishments is not shameless self-promotion, but one of the best ways to put yourself in a position to be better able to help others, whether they be your clients, your coworkers, even the companies in which you work, which research suggests would benefit from more women in leadership. It’s also true that being recognized for the work we do is just as important for our sense of fulfillment as mastering and enjoying the work itself. You may feel like good work should be noticed, but it may not be if you don’t draw some attention to it, or if you deflect credit for it when it is noticed. A healthy self-interest can work in the company’s best interest, too. You should not sacrifice having a great career and a great life for the company you work for, because the company will ultimately benefit from you having both.

The entire book is filled with stories of women realizing that a specific behavior was limiting them, and what they did to change it, that will be instructive to your own effort. But Part Three, “Changing for the Better,” tackles the process head on. It is here the authors explain the importance of focusing on just one habit at a time, of enlisting support, and telling others of your intention to change to keep you to it. They also speak to the importance of forgiving yourself when you mess up from time to time, as we all inevitably do.

I feel slightly hesitant writing all this, partly because I’m a man and don’t want to sound as if I’m “mansplaining," but also because it can come off as akin to an idea that Helgesen eschewed almost three decades ago: that women need to change and adapt, that they need to act less like women to fit into and succeed in the professional world. That is not the lesson of How Women Rise, anymore than What Got You Here Won’t Get You There tells leaders that they must stop acting like a man to succeed. Although the book is (and this is important) written for women, the lessons apply to anyone exhibiting the 12 self-limiting behaviors they address. I know many apply to me, and I have personally taken a lot away from the book.

Sally Helgesen was a pioneering voice on why “Women’s Ways of Leading” are so advantageous to organizations. But, like any leader, the behaviors that get women into leadership positions don’t always serve them once they’re there. We’ve witnessed a wonderful uptick of great books on the importance of women in the workplace, and in leadership positions in particular, that echo the important message of The Female Advantage. What Helgesen has produced here with Marshall Goldsmith is a how-to guide for women to seize those positions of power and influence. We’ll all be better off when that happens. 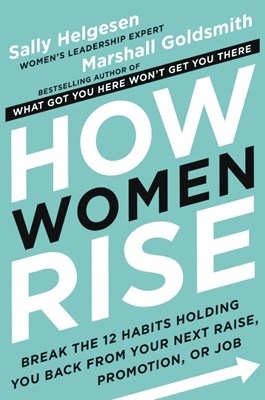 How Women Rise: Break the 12 Habits Holding You Back from Your Next Raise, Promotion, or Job