In Praise of Wasting Time

Alan Lightman takes us on an exploration of time and our inner lives that we can use to reclaim our mental health and creativity.

Wasting time is seen, very literally by many, as a cardinal sin. We live in an age where ambition is assumed, productivity is paramount, and increasing efficiency is the ultimate goal. In our ongoing quest to be more productive and efficient, we reach for whatever technology is offered with the promise of increased collaboration and creativity, greater speed, and the disruption of the existing order in the name of progress. And so, almost without noticing it, we have come to live on the grid that this technology has weaved, and to experience the world as much through the devices we carry with us and work on as through the senses we were born with.

Being removed from that grid, due to a weak signal or a lost device, can cause serious consternation—even panic. “All around me,” Alan Lightman writes in his new book, In Praise of Wasting Time, “I feel a sense of urgency, a vague fear of not being plugged in, a fear of not keeping up.” Much of this stems from the ever-increasing pace of business, which is not a new phenomenon. As Lightman writes:

The pace of life has always been driven by the pace of business, and the pace of business has always been driven by the speed of communication. In 1881, in a book titled American Nervousness, its Causes and Consequences, physician George Beard noted the increase in “nervousness” and stress in the public caused by the new communication technologies of the day: the railroad and the telegraph. Today, it’s the Internet.

One of the great paradoxes of our current communication age is that the more digitally connected we become, the more we find ourselves isolated from the real world and from each other—documented in book like Sherry Turkle’s Alone Together and Nicholas Carr’s Glass Cage, among too many others to name here. And there is increasingly clear evidence that the nervousness and stress George Beard noted rising with previous technologies are once again on the rise—along with depression—and that our children are the canaries in the coal mine.

Lightman cites the The National Institute of Mental Health, which has documented a sharp rise in adolescent depression and the number of distressed youth in America. He explains how the NIMH found that the number of adolescents reporting a depressive episode rose from eight to thirteen percent between 2010 to 2015, an epidemic many experts ascribe to “the massive and pervasive presence of the digital grid, with little opportunity or desire to disconnect.” Even if there is opportunity and desire, we’ve learned—in books like Nir Eyal’s Hooked and Adam Alter’s Irresistable—how tech companies intentionally design their products to be addictive. (This is, of course, also not a new phenomenon, as demonstrated by big tobacco and industrial food companies for generations, with similar effects on our physical health.)

Beyond the health effects, however, Lightman also explains how this increase in technology may also be undermining the creativity most business experts say is critical to success—for both individuals and organizations—in today’s economy. He cites the work of Kyung Hee Kim at the College of William & Mary, who after analyzing almost 300,000 Torrance scores of children and adults since the late 1960s, found that creativity scores had been steadily rising… until 1990. That is when results began consistently to diminish, a decrease that has been more significant in the scores of younger children in America—from kindergarten through third grade—where the decline is most serious. Lightman contends that “the wired world is clearly the culprit,” as “1990 approximately coincides with the the public emergence of the Internet, the rapid increase in speed of communication, and the general increase in the pace of life in general.” It is a phenomenon that manifests in our everyday lives offline, as well:

A momentous study by the University of Hertfordshire in collaboration with the British Council found that the walking speed of pedestrians in thirty-two cities around the world increased by ten percent in the ten year period from 1995 to 2005.

His diagnosis of the situation lingers on nearly every page of the book, but can probably be summed up with this quote:

In a world that is hurried and time-driven, overscheduled, noisy, hyperconnected, and wired twenty-four/seven, we have less time for play, for quiet reflection, for free grazing of the imagination, for thinking and absorbing what we have learned, for invention. There is little time to waste, even for children.

I have been focusing on the effects on business and children in this review so far, but Lightman turns the focus on himself as an individual more than on anyone else or any larger phenomenon. It makes for a personal, and powerful, exploration of what he feels he has lost, and what he worries we’ve all lost as we become more and more plugged into the grid:

I believe that our entire way of thinking has changed, our way of being in the world, our social and psychological ethos. Many of us cannot spend an hour of unscheduled time, cannot sit alone in a room for ten minutes without external stimulation, cannot take a walk in the woods without a smartphone.

And this “behavioral syndrome” affects our inner lives in deep and detrimental ways. Speaking for himself, he writes:

But Lightman's book is not only a lament, not merely a dirge mourning the advent of the digital age and the loss of our inner life. It is also a call to reclaim it, with suggestions for restoring moments of mindfulness, silence, introspection, and true togetherness that we can implement in our schools, our businesses, and our families. It is a book about restoring human creativity, about renewal, and how both are best accomplished by—even require—unplugging from the grid. Lightman writes about walking around Walden Pond, less than a mile from his home, where Henry David Thoreau famously lived and wrote for a time:

“Our life is frittered away by detail,” wrote Thoreau. “Simplicity, simplicity, simplicity. I say, let your affairs be as two or three, and not a hundred or a thousand.” I want to recover what I have lost. I want to live in the slow world. I want to be free. Yet I feel the invisible cage. Even as I walk around the pond, the electromagnetic waves of the Internet rush through my body. Technology is both a blessing and curse. In Thoreau’s day, the new technology was the railroad. “We do not ride on the railroad,” wrote Thoreau, “it rides upon us.” Can I escape? Can I find stillness? A leaf falls from a tree. Slowly, so slowly, I watch it stop time.

We can paraphrase Thoreau to remind ourselves that we do not work on the internet, that it works upon us—that we don’t exist upon the internet, that it exists upon us. It is not a universal good or evil. It has both connected and splintered us. But more than anything, we must realize that it has undeniably changed us, decide if what we have lost in the process is worth it, and figure out how to reclaim what we have lost if we decide it is not worth it. Lightman’s 128 pages In Praise of Wasting Time reawakens our inner selves and illuminates those fundamental questions for us.

This is not the first time Alan Lightman has turned on such a light for me. I found his book, Einstein’s Dreams, when I was in high school—probably while wasting time at the bookstore next to the movie theatre where I worked at as a teenager. It is a novel that imagined the dreams Einstein had in different conceptions of time, dreams that led to his theory of relativity. But here’s the thing: Einstein didn’t really come up in his sleep with the theory that revolutionized our understanding of the universe. He took long walks every day. He had a daily routine that included a lot of what we would today describe as “wasting time” which allowed his thinking to stretch out as wide as the concepts he was imagining and bringing into the world, to make unexpected connections and conclusions in the spaces between his more focused, more convergent thoughts.

Franklin Foer, in his book World Without Mind, suggests a return-to-paper movement to counter the industrialization of information, “to decouple from the machine, to tend to our human core.” It’s an idea I really love, a slow information diet to mirror the slow food movement that has pushed back against its industrialization. Tom Peters, in a ChangeThis manifesto we published yesterday about The Speed Trap business is caught in today, began a conversation that I hope will blossom into a Slow Management movement. And Lightman, with In Praise of Wasting Time, has started a conversation we can use to begin pushing back against the industrialization of our attention—to reclaim our downtime, which has become a dirty word:

In the business world, the technology world, and the computer world, “downtime” is a dirty word. It means a period when the system is not working, when the computers have crashed, when the machines have temporarily ground to a help. In these contexts, downtime is considered useless time, empty time. But for the lush and mysterious terrain of our minds, downtime is a chance to explore. It is a time to renew.

I think that if we can reclaim those moments of downtime, we’ll find that the time isn’t wasted at all, but that which we cherish the most. 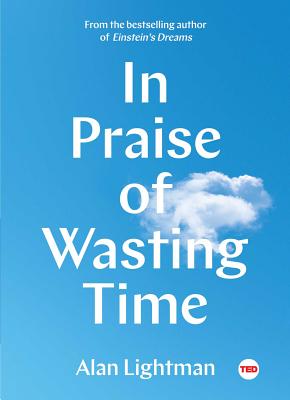 In Praise of Wasting Time