Dr. Tasha Eurich's new book is a sometimes uncomfortable, always powerful eye-opener to what it takes to be truly successful. Insight: Why We're Not as Self-Aware as We Think, and How Seeing Ourselves Clearly Helps Us Succeed at Work and in Life by Dr. Tasha Eurich, Crown Business, 368 pages, Hardcover, ISBN 9780451496812

Dr. Tasha Eurich earned her PhD in Industrial-Organizational Psychology, which sounds very severe, bureaucratic, and bland. Her new book, Insight, is anything but. Making her case that “self-awareness is the meta-skill of the twenty-first century” and an effort to teach us how to form it, Eurich is insightful, penetrating, humane, and holistic in her approach:

[T]he qualities most critical for success in today’s world—things like emotional intelligence, empathy, influence, persuasion, communication, and collaboration—all stem from self-awareness. To put it another way, if we’re not self-aware, it’s almost impossible to master the skills that make us stronger team players, superior leaders, and better relationship builders—at work and beyond.

Unfortunately, a finding by Stanford professor David Dunning and Justin Kruger, known as the Dunning-Krueger Effect, has shown:

The least competent people are usually the most confident in their abilities.

Which is to say, we are ignorant of our own ignorance. So, how do we know if the Dunning-Krueger Effect is at work on us, if we’re delusional about our own abilities and others perception of us? The answer is to deliberately develop more self-awareness. Luckily, Eurich has found that the behaviors needed to create and sustain it are “surprisingly learnable.”

She did a three-year research program on the subject of self-awareness, and found much if not most of the previous work in the field to be wanting (she writes about this and many other ways in which psychology has a checkered history throughout the book), so she and her research team spent months simply defining what self-awareness really is. What she and her researchers concluded is that there are two categories of self-awareness—internal, understanding yourself, and external, understanding how others perceive you—and that there is not a relationship between the two.

Surveying thousands of people, they found 50 that were “self-awareness unicorns”—people that began their adult lives with little self-awareness but had gained it over time, and then studied them to see how it was done. Alan Mulally, the former CEO of Ford who not only saw the company through the Great Recession, but also ran one of the most successful turnarounds in modern corporate history during it, is on one of those 50. When telling Eurich why he agreed to be involved in the project, he replied that “Throughout my career and my life, there has been on essential truth: the biggest opportunity for improvement—in business, at home, and in life—is awareness.”

There are seven pillars of insight that lead to self-awareness: knowing your values, passions, aspirations, fit, patterns, reactions, and impact. But they are not, in typical business book fashion, put into list or bullet format; instead they form the key points in what is essentially an essay on “The Anatomy of Self-Awareness” that makes up the second chapter.

If I could summarize it for you, I would say the lesson is that one must be able to truly know thyself, while also being able to take on the perspective of others. You have to zoom in to understand your own feelings, and then zoom out to see the larger picture, appreciate the experience of others in whatever situation you find your self. The “Zoom In, Zoom Out” tool was developed by psychologist Richard Weissbourd, and is one of many—her own and others’—she brings to the process of becoming more self-aware. And she also highlights the philosophies and tools that are ineffective, or downright damaging, throughout the book (more on some of those later).

She compares internal and external self-awareness to hydrogen and oxygen, two elements that can be combustive, but when coupled just right, create the H20 that sustains life on Earth:

Self-awareness is a bit like that: when we couple a clear perspective on ourselves with the ability to abandon that perspective and see ourselves as others do, this magical combination is a tremendous force for good.

Internal self-awareness will only take you so far (the pillars of values, passions, aspirations, and fit). You need feedback from others to see your patterns, reactions, and impact. You need to know yourself intimately, while at the same time be able to see yourself objectively—to know who we are and how we’re seen.

There are two big road blocks to developing self-awareness. The first are our own blindspots (there are three categories: Knowledge Blindness, Emotional Blindness, and Behavior Blindness). Eurich shows us how to move from blindness to insight—how to open our eyes to ourselves and our behavior, and how it affects others. One of those tools is a commitment to it as an ongoing process, not a one-time fix.

A true commitment to ongoing learning—saying to ourselves, the more I think I know, the more I need to learn—is a powerful way to combat knowledge blindness and improve our effectiveness in the process.

Seeking and getting objective feedback from those around us on our abilities and behaviors provides the best odds of overcoming these blindspots.

In the category of “amusing yet accurate observations,” Stanford researcher Hayagreeva Rao believes that leaders who have teenage children are less prone to overconfidence for this very reason. As anyone with a teenager knows, they are perpetually unimpressed and will never hesitate to tell you how great you aren’t. (And it’s true that surrounding yourself with people who disagree with you is one of the most fundamental building block of leadership success. Great leaders have people around them who call them out, and failed leaders almost never do.)

It’s both “incredibly hard” and “unquestionably worth the effort,” because the alternative is failure. But, beyond our own blindspots, there is an insidious cultural force at work, what Eurich calls The Cult of Self that has arisen in our society:

It lulls us into thinking that we’re all unique, special, and superior. That our needs matter more than everyone else’s. That we’re not subject to the same rules as other people are. That we’re deserving of things simply because we want them. No wonder the Cult of Self has successfully recruited so many of our neighbors, friends, and colleagues—perhaps it’s even succeeded in luring you.

It has clearly ensnared many of our nation’s leaders. Eurich believes we’ve moved from an Age of Effort that lasted hundreds of years in America, founded and built upon “the principles of hard work, grit, and resilience,” when modesty and humility were valued, and have now entered and Age of Esteem, in which the goal is simply to feel good about ourselves and our own exceptionalism. It has stemmed largely from the self-esteem movement in psychology, now widely bemoaned but still predominant in many ways, of which there are two main problems: no empirical studies of self-esteem have been shown to reduce negative social ills or increase one’s likelihood of success (including the study done by Nathaniel Branden, largely seen as the father of the field), and there is no evidence that we were suffering from a crisis of confidence as a society in the first place. Quite the contrary:

At the same time self-esteem proponents were “bemoan[ing] the lack of self-love,” self-esteem levels were steadily and almost uncontrollably rising. The real social ill was that most people felt too good about themselves (often without any objective reason).

In fact, psychologist Roy Baumeister has found irrational self-esteem increases violence and aggression, makes people more likely to walk away from relationships at the first sign of trouble, and more likely to engage in self-destructive behavior like infidelity and substance abuse. It’s been decades since this research came out, but as Eurich says “it’s far easier to feel wonderful and special than to actually become wonderful and special,” so our obsession with self-esteem continues.

But, “Thankfully,” she notes, “the alternative to boundless self-esteem doesn’t have to be self-loathing but rather self-acceptance.” Just as she walks us through the transition from blindspots to insight, she shows us how to move from self-absorption to self-awareness—and real engagement with others. I’ve focused often in this column on books that discuss the importance of focusing on long-term sustainability over short-term profits. This is what it looks like on a personal, emotional level. (In Part Three of the book, on the myths and truths of external awareness, the author speaks to the importance of self-affirmation, which is yet another thing altogether, and helps us remain open to critical or difficult feedback from others.)

After discussing the road blocks to self-awareness, she devotes a full part of the book to just internal self-awareness, and then another to external self-awareness. The first exposes the four follies of introspection, including how it is oddly divorced from any real insight into ourselves. What her research (and others’) has showed is that “self-reflection doesn’t help us become more self-aware.” It is here she suggests we ask ourselves what kind of person we are (which gives us a chance to determine the answer) rather that why we are the kind of person we are (which turns us into a victim of our circumstances). Even changing the question from “why am I feeling this way?” to “what am I feeling right now?” is helpful—being easier to identify and giving us an agency to change it.

An additional strength of the book is that it’s not solely about personal development. Eurich also explores how leaders can build self-awareness in others, and instill it in their organizations. In the final part of the book, she explores “how to build self-aware teams and organizations,” employing “a leader who models the way,” ensuring the “psychological safety” to speak truth to power, and developing an “ongoing process” to bake feedback into the culture of a company. She wraps it all up with a chapter on “Surviving and Thriving in a Delusional World,” which seems especially timely.

Eurich also weaves in informative and entertaining tales from the past—how a brash and, frankly, delusional young George Washington became a self-aware and respected general (one of my favorite lines of the book, “I am unconscious of intentional error, [but] I am nevertheless too sensible of my defects not to think it probable that I may have committed many,” comes from his farewell address), how Benjamin Franklin survived a bullying brother, two business failures, and fathering a child out of wedlock before the age of twenty-five to become one of the most brilliant and successful founders of our country, and what happened to the Mayan civilization—and how the scholarship of that topic has in some ways mirrored the scholarship of self-awareness.

I appreciate books that acknowledge that neither life in general, nor what the author is prescribing, are easy. Tasha Eurich’s advice—that we should challenge our own beliefs about who we are, and enlist others to do the same—she knows is hard. But it’s the hard things that are worth doing, that will lead to sustainable success in individuals, organizations, even nations. Insight shows us how. 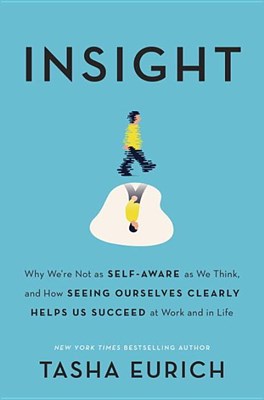