In his new book, Jonah Berger tells us how profoundly our decisions and behaviors are affected by those around us, and how to navigate and use that "invisible influence." Why do firstborn children tend to do better academically, while younger siblings are more likely to excel in athletics? What drives a bestseller, or a top 40 hit? Why do middle class consumers get annoyed when their neighbors or friends buy the same vehicles as them, while the working class consumer will be happy for their neighbors—perhaps suggesting they start a car club? Why did Abercrombie & Fitch pay “The Situation” not to wear their clothes on Jersey Shore? The answer to all of these questions, Jonah Berger tells us, boils down to social influence.

We are all defined by the choices we make, and because individuality is so valued in our culture, we like to think that those choices are mostly unaffected by others. We make decisions based on our personal preferences, our unique tastes, our individual ideas and opinions, right?

We all recognize that social influence affects other peoples’ behavior and choices. But when it comes to our own decisions and behavior, we are blind to the influence. We like to believe we are independent, unique, distinct. We will even change our decisions to prove it—say… changing our mind about our order at a restaurant if someone before us orders it, or dropping a band we once liked because they’ve become more popular. Both, of course, are instances of social influence, and ones that rob us of something we would have otherwise enjoyed.

“Distinction is valuable” to us, Berger writes, “because it provides definition.” It helps us define our very sense of self. Think about how embarrassed you were the last time you showed up to work or a social gathering wearing the same outfit as someone else. And yet we are more likely to pick up a bestseller, to go to a movie with a good rating on Rotten Tomatoes, to download a song that has a lot of previous downloads, and to park in a similar pattern to those who parked before us.

Berger’s first book, Contagious, examined how products and ideas catch on, take hold, and spread to become huge successes. And there is a lot in Invisible Influence that dives into adjacent territory. He tells us, for instance, how huge hits in the entertainment business are driven by “the luck of the herd,” rather than by virtue of being the very best. After all, if the most popular songs, books, and movies were also the very best, they should stand out to the people who work in the field everyday, those who publish and produce the work, and the experts who follow the industry—the “people whose job it is to be able to tell the good stuff from the bad.” And yet, the original manuscript for the first Harry Potter book was rejected by the first twelve publishers it was submitted to. And, as Berger notes, “it’s not just J.K. Rowling.”

Gone with the Wind was rejected thirty-eight times before it was published. Elvis was told he should go back to driving trucks. Walt Disney was fired early on because he “lacked imagination and had no good ideas.”

We use others’ opinions, and more importantly popular opinion (something early reviewers don't have access to yet), as a shortcut for sifting through “the thousands of books, movies, and songs vying for collective attention.” The fact that something is popular lends it credibility. Of course, the wisdom of crowds is a much-celebrated phenomenon these days, but it doesn’t always work out well. Large groups can also lead to groupthink if you’re not carful, which is especially important in how organizations make decisions.

People talk about the wisdom of crowds, but crowds are only wise when the group has access to everyone’s individual information. Aggregating these pieces can lead to better decisions than any person could have made alone. But if everyone just follows everyone else, or keeps information to themselves, the value of the group is lost.

The story of Opower provides a perfect example of how social influence can be put to use on a large scale, and is more effective than appealing to someone’s sense of responsibility, conscience, or even their pocketbook.

Professors at Cal State San Marcos ran an experiment to study how different energy conservation appeals would affect energy consumption. They sent graduate students door-to-door with three different messages—one focused on saving money, one on helping the environment, and one on social responsibility. They then measured the test groups’ energy usage after the appeals were delivered compared them to before they were delivered. None of them worked. But there was a fourth appeal. This one simply stated that “When surveyed, 77% of their neighbors use fans instead of air conditioning to keep cool in the summer. Turn off your air conditioning and turn on your fans.” People that received that message decreased the energy use significantly.

Based on the San Marcos study findings, Dan Yates and Alex Lasky formed Opower, which “now works with more than one hundred utility companies worldwide” to send consumers “carefully targeted reports” on their energy usage—but not just their own energy usage:

Designed based on the San Marcos Study findings, the energy reports show consumers their consumption relative to similar households nearby. Whether they are using less or more than their peers.

They then pair that information with steps the consumer can take to reduce their own energy usage, which can be as simple as turning off lights and adjusting the settings on their television. And those small steps all add up:

These programs lead people to reduce their energy consumption by around 2 percent. For a given person, this decrease may nor seem huge, but aggregated across the country the impact is staggering. Since their launch, Opower’s programs have helped save more than 6 terawatt-hours of energy … or the equivalent to taking all the homes in Alaska and Hawaii, more than 2.1 million people, off the power grid for an entire year.

You’ll also find some great tricks in the book to influence others on a smaller scale. For instance, you are more likely to get a job, or close a deal, if you use the power of mimicry. If you lean back in there chair when the person across from you does, or touch your face when they do, you’re sending them a very subtle signal that increases the chance that they’ll think favorably of you and act in your favor. 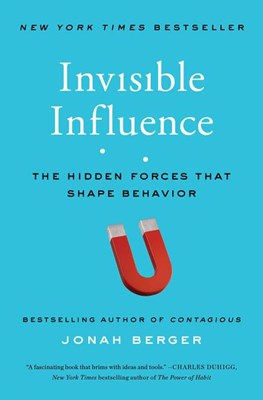