Late Bloomers: The Power of Patience in a World Obsessed with Early Achievement

Rich Karlgaard's new book makes the case that our obsession with early achievement is "shortchanging people and society." Rich Karlgaard didn’t know about the college admissions scandal when he wrote his new book, Late Bloomers, but I doubt it surprised him. Writing about the exorbitant prices some parents pay to get their children into preschool—which can run nearly $40,000—Karlgaard cites Parenting magazine's explanation that it’s “all about preparing kids for their futures—attending prestigious colleges.”

According to these luxe preschools, there is one goal that justifies the cost: Get your toddler into a prestigious college fifteen years later. The message could hardly be more direct—or more threatening. If your kid doesn’t ultimately get into a “prestigious college,” his or her life will be needlessly hard.

He also documents how SAT prep courses and tutors—courses and tutors that some parents send their children to as early as seventh and eighth grade—now make up a nearly billion dollar industry, and how it’s not uncommon for parents to drop $10,000 on legal college admissions consultancy at the end of all that to get into the nation’s top universities. It’s really just a hop, skip, and jump from there to simply paying someone to take your kid’s SAT for them, or illegally bribing your way in to a top school via a scholarship in an obscure sport your child doesn’t even compete in. It is a system that is not only undermines those without the resources to pay such costs, but that undermines the very humanity of our education system. As Karlgaard puts it:

Reducing education to test preparation jeopardizes the quality of curricula and the craft of teaching. It drains education of humanity.

The everyday human tragedy of this is that, rather than giving them a leg up, there is an abundance of evidence that suggests that this emphasis on early achievement (or just keeping up) is, in fact, creating a mental health crisis among our teenagers young people, with alarmingly rising rates of mental illnesses such as depression and anxiety—and even suicide, which “from 2007 to 2015 … rose 40 percent for teenage boys and more than doubled for teenage girls.” And the pressure on young people is only compounded, rather than eased, when kids make it to the promised land of elite educational institutions, where expectations and the pressure to achieve are even greater. It is also compounded by media—both mass and social—that celebrates early achievement and skews our own expectations of it. As Karlgaard writes:

We’ve long understood that movies, magazines, and television can shape self-image and enforce social ideals, but social media has now become our most toxic cultural mirror.

The tests on which this is chase for early achievement is built are themselves more than a bit problematic. The IQ test, and the SAT that was modelled after it, both trace their widespread use back to the ugly history of the American eugenics movement, and a quest to confirm backward ideas of racial superiority. Originally developed in France to measure the mental capabilities of a child in relation to their peers as education became mandatory as the 19th century turned to the 20th, the IQ test was originally meant as a measure of the knowledge children had attained at the moment in time the test was conducted—not as the supposed measure of innate intelligence it has become. But the test was popularized by Stanford psychologist Lewis Terman, a cofounder of the Human Betterment Foundation, “which advocated the sterilization of inferior races,” as a way to “quickly identify the mental abilities of soldiers, to better determine where they might fit in the war machine” as the US entered World War I. (It was largely successful in that effort, if not the larger one of measuring innate intelligence.) Carl Brigham, who developed the SAT, was himself a “eugenics enthusiast, if not a zealot like Terman.” That ugly, racist history might not necessarily be a reason to abandon the tests wholesale, should they actually be able to measure what they’re supposed to, but they are not. Perhaps more to the point, then, is that these tests don’t have any predictive validity, because once attaining a high scores became the goal, a tests' ability to measure what they purport to is no longer unsullied or sound. As Karlgaard puts it:

[T]he more we incentivize test results, the more people will beg, borrow, and steal to game the tests. So people with the economic resources for private tutoring and extensive test preparation will attain significantly higher scores—without having learned much more about the subjects being tested. This seems like a lousy, and unfair, method for determining the future of a sixteen- or seventeen-year-old.

In this way, it entrenches economic inequality, and extends it. And that’s because it has built a system that enriches those with the highest test scores, in very specific subjects, at a very specific age, who earn “the greatest financial rewards”—and do so “blindingly fast” in life.

Few articulate this, but we all know it’s true. In a highly uncertain economy, society has put tremendous pressure on children to achieve test scores that make them hirable by the most profitable companies in the most lucrative industries.

“The most successfully measured among us make the most money,” explains Karlgaard, “and they make it the fastest.” He uses the examples of six men—Bill Gates, Sergei Brin and Larry Page, Mark Zuckerberg, Jeff Bezos, and Steve Wozniak—all of who had perfect scores, to highlight this point:

The combined personal wealth … is more than $300 billion. And the companies they created are worth $3.6 trillion, more than the GDP of all but nine countries.

Karlgaard makes a compelling argument that, although society has become more accepting of diversity and personal idiosyncrasy in many ways, it is now less tolerant of late bloomers and those whose talents don’t align with the STEM (science, technology, engineering, and math) skills currently valued most by the job market. Blooming late is seen as a personal fault, even though we know that humans are not cognitively mature until their mid-twenties.  That makes the pressure to adhere to a track of early achievement in a STEM field incredibly strong. But, as Karlgaard sees it:

The toxic combination of early pressure and conformity is turning us into machines.

And this sets us up for a competition we’re guaranteed to lose.

Because the profound irony of all this is that:

We can, as a society, get off this development track, and Late Bloomers offers “A Kinder Clock for Human Development” to do so. He offers his own story as an example.

The publisher of Forbes magazine and author of four books, Karlgaard’s first job in publishing was as an editorial assistant at Runner’s World magazine, a job he “quit ahead of a firing for being a stoner and slacker, picking fights with colleagues, and misspelling names on race results.” While he went to Stanford (how he got in is a story in its own right), he wasn’t an exceptional student in any way. In fact, he whiled away much of the time he set aside to study diving into back issues of Sports Illustrated in the library’s archives. That paid off when he launched his own magazine covering Silicon Valley Upside, which he very deliberately molded on SI, in both editorial voice and design, making the cognitive leap that the nature of competition in the valley, with its celebrity culture and chase of glory, was similar to sports in many ways. Spending time making his way through every back issue of SI dating back to its inception in 1954, it turns out, may have been the best and most relevant education for his life to come. “It may have wrecked my grades,” writes Karlgaard, “but curiosity made my career.”

Curiosity is one of the six distinct strengths Karlgaard believe late bloomers possess. The others are compassion, resilience, equanimity, insight, and wisdom, all of which “are conferred only with time.” He discusses how the culture we grew up in—that of our family, community, and even society—can work against us, and how social norms, cultural expectations, and the unrealistic standards set by both mass and social media can do so, as well, leading us to compare ourselves to others and altering the expectations we have of ourselves rather than exploring what is unique to us. He counsels us to quit in many different ways, and explains the unexpected power of self-doubt (and self-compassion), new beginnings and reinvention, storytelling and the ability to construct a narrative, and regaining our sense of agency. He extols the benefits of gap years in early life, and getting off the typical development, education, and career path to develop in broader way, to expand your view and understanding of the world, and yourself, and how you fit into it. He argues for a more creative career path that the typical up-and-out model, in which we gain titles, responsibility, and better pay as we age, and suggests for a career arc in which we are able to make valuable contributions even after we’ve reached our peak (peak salaries, peak skills, and peak productivity) when titles and pay stop accruing, and may even begin to decline to make room for those coming up.

It all makes a compelling case that a great deal of our best traits develop as we age—mature as we do—and society should be able to find a way to put those to use. And that sad reality of the moment is that:

Large swaths of people in this country feel unacknowledged, unappreciated, and disrespected. They want us to see their pain but also their potential. This shouldn’t happen in a society like ours. But out of ignorant good intent, we’ve designed a human sorting machine with a conveyor belt to early success that guarantees this unhappy result.

Our obsession with SAT scores and STEM degrees are just a part of a system. The higher costs and dramatically lower acceptance rates across higher education that have left far too many on the outside, and those who “made it” saddled with $1.3 trillion in college debt “with an 11.5 percent default rate … greater than the 2018 housing bubble,” is another problem. The big difference for individuals, I suppose, is that banks can’t come take your degree away as they did to so many family’s houses during the great recession.

I come away from Late Bloomers wondering if our world is speeding up at such a seemingly dramatic and unsustainable pace because our society now rewards that which we all lose over time, “raw synaptic speed,” rather than that which we all hope to gain, “wisdom and experience.” Or maybe I’m being naive, and what most people hope to gain in life is wealth and recognition. But I wonder what the focus on early achievement and new technology that drives it has gotten us. Have the smartphone and social media improved the human condition, and made the world a better place? When I look around at people staring down at their smartphone screens, clearly addicted, instead of engaging with each other, or see Facebook being used to trample on our privacy and potentially sway our elections, and Twitter used as the mouthpiece of a leader seemingly bent on upending the institutions that have secured and furthered our experiment in self-governance, and made the relative stability of the post-war western world order possible, I have serious doubts.

But as Karlgaard writes of our individual destiny: “Our future story is written in pencil, not carved in stone. It can be changed.” The biggest successes are often the most unconventional and unexpected, those that break the mold. There is still time for a late blooming success, regardless of the odds currently stacked against it. 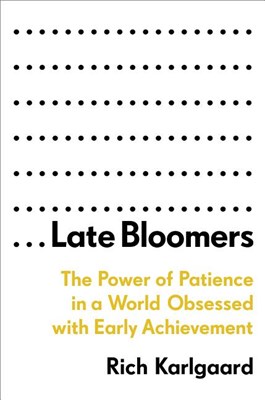 Late Bloomers: The Power of Patience in a World Obsessed with Early Achievement