Lead Right for Your Company's Type: How to Connect Your Culture with Your Customer Promise

William Schneider can help you ensure that your enterprise is a living system that is “continually adapting, learning, and developing.” While constructing your business model, organizational hierarchy, and operations flow chart, it’s easy to forget that there are living, breathing human beings behind all those boxes. But if you’ve ever started or run an organization, or tried to change one, you know that it is a fundamentally human undertaking. As much as you may want it to run like a well-oiled machine, “Your enterprise” Schneider insists, “is biological, not mechanical.” In his new book, Lead Right for Your Company's Type, he explains how every enterprise is, at its core, a living people system.

Of course, because people are imperfect, that leads to people problems. Every enterprise encounters them and, today, they’re often chalked up to cultural issues and addressed by some kind of change initiative. But there is no one-size-fits-all solution. Schneider believes such “people problems” are most often the result of disconnections caused instituting cultural and leadership practices not suited to the kind of enterprise you’re running. There are, Schneider tells us, four fundamental types of enterprise, each with a corresponding customer promise, culture, and leadership style. Schneider defines them as:

What your enterprise focuses on (the actual or the possible) and how it makes decisions (personally or impersonally) should be based on what type of enterprise you’re in. Predictable and dependable enterprises, like utilities and automobile manufacturers, for example, are focused on actuality and make decision impersonally based on quantifiable facts and hard data. Customized enterprises, such as PR firms, are going to focus on what’s possible for their customer and make decisions personally, based on consensus with their customer.

The world is awash in examples of good management ideas gone wrong, and this is because they are misapplied. Even well established, successful enterprises can become pulled apart when they try to institute cultural and leadership practices of another type of enterprise in their own. Schneider’s introductory example of this is when Microsoft’s technology group stopped reporting directly to Bill Gates and began focusing more on reporting their profits and losses, which led them to focus only on projects that could turn a quick profit. It was 1998, and “In three short years,” the author tells us, “Microsoft lost more than half its value”—simply because a best-in-class enterprise tried to institute the leadership and compensation practices of a predictable and dependable enterprise.

Another early example is of an oil-drilling supervisor hiring a sensitivity consultant for his tool-pushers because a friend at a PR firm told him of the wonders it did for his employees. The story of Apple, told in various parts in the chapter on “The Best-in-Class Enterprise,” is here less a story of Steve Jobs’ genius returning to save the company, than it is of the management while he was gone misaligning the company’s priorities and taking its focus off its longstanding customer promise to make great products. Recommitting to that focus of great products led to the great profits that those who forced Jobs out were chasing. Over the course of the book, you’ll learn why a customized enterprise like IDEO can thrive without any official hierarchy, titles, or policies, while such an approach would be disastrous for a predictable and dependable organization like IBM or Amazon—the latter of which, we are told, is going too far in controlling its employees, to the point of intimidation. You’ll learn why customized enterprises depend upon trust in people, while predictable and dependable organizations rely on trust in process. You’ll learn why steward leadership, while proclaimed by some to be the best fit for any organization, isn’t going to work at a nuclear power plant, and why vertical de-integration probably isn’t the right approach at a physical therapy treatment center.

The phenomenon isn’t confined to for-profit enterprises. One of the trends we’ve seen in our country is business leaders being elected to public office—the idea being that what we just need someone to run government like a business. This isn’t a problem in-and-of itself—businesspeople are citizens, too, and some of that skillset is certainly translatable—but it becomes a problem when their leadership isn’t aligned to the promise government and its associated functions exist to serve. A truly terrifying and tragic example of this is what has occurred in Michigan:

Governor Snyder was elected, in part, because he was a former corporate CEO and venture capital entrepreneur, and people believed he would use his business acumen to improve Michigan’s finances. Governor Snyder’s strategy was to appoint seven “emergency managers” to run all public entities in Michigan. The managers had complete authority to do what each believed was necessary to get the state financially sound.

One of those emergency managers had an idea that would save between $6 million and $8 million dollars and, because of the streamlined decision-making process, was able to implement it quickly without a lot of red tape.

So, the city of Flint, Michigan switched its water supply from Lake Huron to the Flint River. As a result of that business acumen, some homes in Flint would soon have lead concentrations in their water that met the EPA’s definition of toxic waste. An estimated six to twelve thousand children have been harmed by it, with life-long repercussions due to their exposure to the water, and the emergency manager installed in Flint is now facing involuntary manslaughter charges for an outbreak of Legionnaires' Disease that killed 12 people during the crisis. Schneider explains how that all stemmed from a fundamental misunderstanding of the essential nature, and customer promise, of any utility:

There are many aspects to what happened in Flint. I want to highlight one. Every water utility, everywhere, is fundamentally a predictable and dependable enterprise. People need clean, safe, potable water, consistently provided 24/7. The water system has to be predictable—people depend on this system to stay alive. That is the promise that every municipal water enterprise makes to every customer.

Culture change is hard. But it can be downright disastrous if you don’t know and acknowledge what kind of enterprise you’re in, and make sure you’re honoring that in the kinds of change you’re making. Trying to save citizens $8 million dollars is a noble goal, but not at the expense of their health. And, of course, the state will end up paying hundreds of times that amount to solve the crisis and compensate victims.

Schneider will help you ask the right questions to determine exactly which kind of enterprise you’re in (you may be surprised) and what kind of promises you're making by being there, and establish the magnetic north of your enterprise. He meticulously explains what leadership practices and culture drivers apply best to what kind of organizations, clearly explains the strengths of each type of enterprise, along with weaknesses to watch out for, and vividly illustrates each type with stories of both wild success and failure. Because it covers so much ground, and the examples cover every kind of enterprise under the sun, you’re sure to find something directly applicable to your enterprise. He even explains the nation’s public education woes as a misalignment of systemic mis-alignment, chalking it up to the fact that education is, at heart, an enrichment enterprise, but it’s being managed as predictable and dependable one, with centralized mandates and standardized (over) testing.

Connecting your customers, employees, and leadership is crucial. And yet, though it seems like a contradiction at first, that means you must focus on the system first.

Individuals are important, but your individuals can only succeed and prosper within the kind of system required to deliver on your enterprise’s customer promise. If you jump into leading and managing your individuals first, without knowing which kind of enterprise you are, you will unconsciously and unintentionally create contradictions and people problems and set your enterprise at cross-purposes with itself.

To best serve people, and deliver on what you promise, you must get the system right. Lead Right for Your Company’s Type can help you do that with straightforward, refreshing, and even entertaining clarity, and ensure that your enterprise is a living system that is “continually adapting, learning, and developing.” 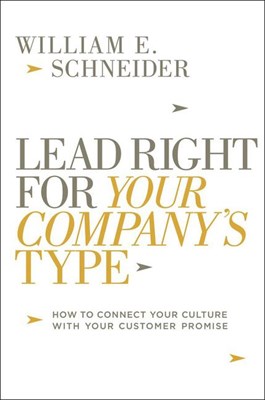 Lead Right for Your Company's Type: How to Connect Your Culture with Your Customer Promise