Beyond the great wealth of business experience, expertise, and advice they bring to the table, the greatest example Stacey Abrams and Lara Hodgson offer may be in the partnership they have formed and sustained while building three companies together. 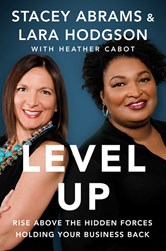 Level Up: Rise Above the Hidden Forces Holding Your Business Back by Stacey Abrams & Lara Hodgson, with Heather Cabot, Portfolio

Stacey Abrams and Lara Hodgson have had a business partnership with a lot of twists and turns, unforeseen challenges and opportunities, unexpected roads ahead, and unfortunate dead ends. That is true of most entrepreneurs, but I can’t think of any others that pivoted from a consultancy (largely based in infrastructure projects) to a manufacturing company (producing bottled water for infant baby formula and toddlers) to a fintech startup.

Most books on entrepreneurship preach that founders must be comfortable with risk. As the father of two young children and the husband of a freelancer, I am decidedly not comfortable with risk, so I’ve never thought entrepreneurship was for me. But Abrams and Hodgson both had other personal, professional, and financial obligations outside of their businesses, as well. One was caring for aging parents and the other a new infant as they set out on their entrepreneurial journey together. Both were still paying off student loans. Abrams was building a career in politics. But they were able to reframe that relationship with risk, leaning on one of the rules they set out when they started working together—that “life comes first”—and reframe it as being comfortable with ambiguity:

Successful entrepreneurs are … comfortable with ambiguity: the uncertainty of not knowing all the answers, not knowing their next steps. We weren’t just okay with uncertainty, we thrived on it. If you don’t know the next step, then you can be curious. You can be open-minded. You can allow opportunity to come your way. Whereas if you’re so anxious to have every next step planned out, then you’re not open to opportunities. You’re not even noticing them.

Abrams has had a surprising avenue of preparation for this work—writing fiction, where even when an outline and an eventual outcome are in place from the beginning, “protagonists and supporting cast often diverged” from the original plan. Of course, one can never expect such comfort with ambiguity from investors, a point they make clear as they explain how they raised money for Nourish and the systemic impediments small businesses face. Even though they had a proven and patented concept on the shelves of national chains, they ran into a roadblock when they needed a cash infusion to scale their company:

The hunt for new investors … stalled in a time of tech-focused venture capitalists. No one saw Nourish as the next big thing.

Because of that, it didn’t have much of a chance to be the next big thing. The book opens with the story of a global retailer who wanted to place an order that was twenty times larger than their typical order. It should have been their opportunity to take their company to the next level, but a lack of cash on hand or willing investors to help ramp up production to meet that order meant they were unable to do so.

It would take a few more years for Nourish to finally go under, but our dream of growing died the day our biggest order arrived.

They had essentially grown their company out of business. They use this personal experience as an introduction to the many challenges small businesses face—especially women-owned ventures, which receive only 16 to 17 percent of business loans despite making up 33 percent of small business. But the challenges extend beyond that, in part because of how the government defines small business (500 employees or less) and especially for Black-owned businesses. And, as much as it seems like the information age and rise of the internet has lowered the bar of entry and empowered people to start a business, the numbers tell a different story:

To launch a business is to be passionate about fearlessly and independently solving a problem. It’s a uniquely American endeavor that has enabled transformative innovation and prosperity. But the promise of business ownership as a ticket to a better life no longer looks as bright as it once did. … The rate of startup creation across the nation plummeted 44 percent between 1978 and 2012, prompting small-business advocates to sound alarms.

Even among those that do get started, roughly half do not last five years—a much cited statistic in business literature. Abrams and Hodgson believe that unfortunate number actually masks a much larger problem: “the number of businesses that stay alive but just barely, unable to scale to the point of sustainability.”

In addition to their lack of equal access to loans and investment, all small businesses are often suppliers to large corporations and government agencies, which means they effectively act as lenders to those larger entities:

You may not realize it, but small firms are collectively the largest lenders in the U.S. because of the payment terms large corporations and government agencies require. As small companies wait thirty, sixty, or one hundred twenty-plus days for customers to pay invoices, we hold more than $1.2 trillion of trade credit—essentially loans we make to our corporate customers for free. Small businesses can charge interest, but the large company that’s on the hook typically won’t pay it. In a monetary battle between David and Goliath, Goliath wins.

It is, of course, not in the interest of large companies for their suppliers to go under, though, and it is not for nefarious reasons most don’t pay them more quickly. It is simply the system currently in place. “Large companies are not trying to hurt small businesses,” they insist, “they’re just trying to manage their own business.” Rather than capitulate to that system, they sought to devise a new one, which led them to their next venture, NowAccount, a fintech company that helps accelerate invoice payments to help keep small business cash flow more steady. Because “sustainable commerce is a flow, not an event,” closing a deal is only the first step in business. Managing the money coming in and going out is what keeps you upright and walking—hopefully long enough for you to really hit your stride. And, even in the face of the challenges already mentioned here (and many more detailed in the book), it is not as complicated as it might seem, and you have agency in the equation.

Bankers use a lot of gobbledygook that makes it sound scary, but that’s just job preservation for them. It’s to their advantage to make it sound so complicated. Understanding your business isn’t that hard when you get the accountingspeak out of the way and just say to yourself, “Where does my money go every day and where does my money come from every day? And at what cadence does it come in versus out?” If you understand that, then you really understand the financials of your business, and you can be empowered to make the best choices at the right time.

There is so much to learn from the stories Abrams and Hodgson share in the book—both their own and the stories of other entrepreneurs they have gotten to know along the way. One of the things I love most about it, though, is its conversational tone. You never feel talked down to, but like you’re leaning alongside them. On every step of the entrepreneurial journey, there are decisions to be made. They have been there/done that, and their insights can help you at whatever stage you’re currently in. Whether you are comfortable being a solopreneur whose business is tied to your efforts alone or want to be able to “make money while you sleep” by growing it beyond yourself, from when VC might be helpful to when it might prove to be a hindrance, or knowing how to negotiate when you're dealing with much larger companies, there is a wealth of experience here to tap into.

But perhaps the greatest lesson of all is in the partnership the two have formed. It reinforces one of their mantras throughout the book: that business is personal.

When you enter into an agreement with anyone, you bring your whole self, not just your “business” self. The weight of your word has to mean something. Without integrity, you have nothing.

Their partnership doesn’t look like a natural match on paper. Hodgson was once a political appointee of a Republican Georgia governor. Abrams ran for governor of the state as a Democrat. It could have been a political minefield, but the transparency, openness, and honesty they practice both in the wider world and in the relationship they have with each other has made it work. Their political ideologies do not align, but their values and work ethic do, which is an example that I think all of us can learn from. Being open and honest with each other also led Abrams to eventually tender her resignation at Now when her political work meant she couldn’t devote the time needed of her to the company—and to coming back as a member of an advisory board for Now Network, a new initiative that aims to help connect corporate and government buyers with small and more diverse businesses. The example of how they do business with others is instructive, but the example of how they have built businesses together is truly inspiring.

I still don’t think entrepreneurship is for me, but I know it is for a lot of people reading this and for a lot of my family and friends, and this is the book I’ll be recommending to them. It is a great primer on how to level up from two women who have done it in so many different ways. 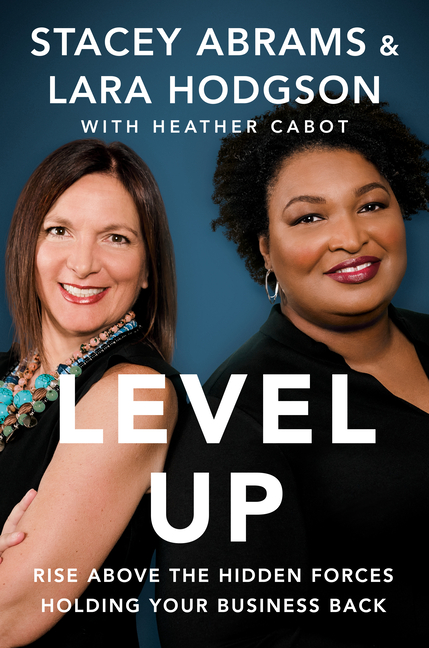