Life Is in the Transitions: Mastering Change at Any Age

Change is not only occurring in the world around us, but in the worlds within us. What we’re going through now is going to change the story and alter the shape of our lives. 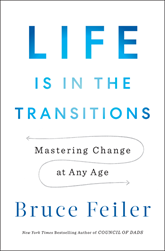 Life Is in the Transitions: Mastering Change in a Nonlinear Age by Bruce Feiler, Penguin Press

How we measure time is changing. Our expectations for how events will unfold are being upended. The many different shapes our lives can take are constantly morphing. And all of this was happening before a novel coronavirus began spreading across the globe. What we are going through now is yet another transition, one that is unique in how all of humanity is going through it together—and in the magnitude of other disruptions it has caused and will continue to cause—but it will pass, and we will end up different on the other side.

Each of us has experienced events that altered the direction and shape of our lives and encountered changes that could be called crises. Many of those events and changes can knock us “off course.” They can cause us to question the direction we’re headed or attempt to change course. What Bruce Feiler suggests in his new book, Life Is in the Transitions, is that the whole idea of life as a “course” is a social construct that doesn’t reflect the reality of how we live out our lives, and that we’d be better off abandoning it. Life is not a straight line, a set of steps to climb or hoops to jump through, or a series of stages or milestones to achieve. It is an ever-evolving nebulous of chances, choices, challenges, and changes.

Feiler chooses a different word, disruptors, to describe them, and as much as I have come to loathe the term disruption due to its overuse and short-sighted celebration in business literature, I understand why he uses it. There are five story lines that these disruptors inhabit: love, identity, beliefs, work, and body. And he didn’t come by them frivolously. As the linearity of his own life was shattered by a Great Recession that left him nearly bankrupt, an adult-onset pediatric bone cancer that left him on crutches for two years after a year of treatment and surgery, and his father’s many suicide attempts brought on by Parkinson’s, he turned to the one thing that had always helped him make sense of the world: stories. First, he began to ask his dad questions about his life, simple ones at first—What were your favorite toys as a child?—then progressively probing deeper over the next four years as his father (dictating his answers through his phone because he could no longer type) reconstructed the story of his life. It not only ended his attempts at taking his own life, it turned into a sixty-thousand word autobiography—written by an octogenarian with Parkinson’s who couldn’t type, and had never been a writer before.

That was the beginning of Feiler’s Life Story Project, a five year journey that led him to every state, and into hours-long conversations with people of every type. He gathered 225 life stories in all, and they are a mosaic of modern life. I am not going to attempt retelling any of the stories Feiler shares in the book here, but they are intensely personal, yet connected to community, painful and uplifting, stories of the unlikely and unvanquished, heartbreaking and triumphant. Taken together, they are representative of the diversity of our country, and of the paradigm changes we are amidst. As Feiler writes of his travels:

What I soon discovered is that a host of unprecedented forces are reshaping contemporary life—technological, political, spiritual, sexual—yet the techniques we use to make meaning of our lives have not kept up. We’re going through transitions more frequently, but our tool kit for handling them has not changed to keep pace.

Alongside the stories he tells, he attempts to provide a new tool kit, one that moves beyond the cyclical time and lives of our ancestors and the linear time and life we feel we need to adhere to today, to the reality of a nonlinear life. As he writes:

The smartest minds today—including those studying computers, biology, math, physics—have come to understand that the world no longer adheres to predictable, linear mandates. Instead, life is filled with chaos and complexity, periods of order and disorder, linearity and nonlinearity. In place of steady lines, observers now see loops, spirals, wobbles, fractals, twists, tangles, and turnabouts.

Trained to expect that our lives will unfold in a predictable series of stately life chapters, we’re confused when those chapters come faster and faster, frequently out of order, often one on top of the other. But the reality is: We’re all the clouds floating over the horizon, the swirl of cream in the coffee, the jagged dash of lighting. And we’re not aberrations because of this; we’re just like everything else.

What he is attempting to offer is a new model for making meaning of our lives, and the transitions we inevitably go through. He wants us to know that it’s okay if we “live our lives out of order” because the order we thought we needed to go in was artificially imposed in the first place. Who we are and how we love, what work we choose to do and what we choose to believe, are all as changing and fluid as the body we inhabit. And in a polarized and divided world where it seems everyone is backing into their corners, I find hope in that. In fact, speaking of the “unprecedented churn in American beliefs,” Feiler writes:

Half of Americans will change religions in the course of their lives; four in ten of us are now in an interfaith marriage. A quarter of Americans now say they have no religious affiliation. Political beliefs are also surprisingly malleable. Four in ten Americans identify as independents today, up from three in ten two decades ago. Half of millennials have switched party affiliation.

From learning how to identify your emotions, to testing out alternatives, to unveiling your new self, the chapters of the book act as a new guide to progression—one that takes into account that we all struggle, that we all experience disruptions and setbacks, encounter new things that open our eyes and allow us to construct our story anew. To do so, we must learn to live through change rather than avoiding it, and to fully experience, embrace, and endure through the tough times rather than run away from them.

[I]f you banish the wolf, you banish the hero. And if there’s one thing I learned: We all need to be the hero of our own story. That’s why we need fairy tales. They teach us how to allay our fears, and help us sleep at night. Which is why we keep telling them year after year, bedtime after bedtime.

They turn our nightmares into dreams.

Change is not only occurring in the world around us, but in the worlds within us. What we’re going through now is going to change the story and alter the shape of our lives. I don’t mean to say that we should be using this time for personal growth or self-improvement; that is falling into the same trap of linear productivity and cult of ambition that we already exist in. There are also larger forces at work on our material life, and in shaping our world, but we determine the material with which we tell our own stories and shape our own lives. And together, we can decide to tell a different story about who we are as a people, and help shape the world we live in. These events will become a part of that story, and the best chances for positive change come during periods of the greatest transformation.

I worry almost every day that my six and seven year old will be defined by these difficult times, that so many of their first memories will be of being locked down, away from their friends and cousins, learning to wear a mask at the same time they learned to ride their bikes—learning about inequality and injustice in our society at the same time they are learning to read. But I shouldn’t worry, because it is unavoidable that they will be shaped by the transitions underway, that the story of their lives will largely begin (or begin again) in this era. I hope I can help them—a task made easier after reading this  book—but their stories are ultimately theirs to write.

When Bruce Feiler asked his father shortly before his death what message he would want to leave his grandkids, his reply was “Write the stories.” I hope that they do, and that they write ones better than we have come up with so far.

Life Is in the Transitions: Mastering Change at Any Age