Kat Holmes tackles the cycles of exclusion that permeate our society with the practice of inclusive design. One of the great promises of digital technology, of the internet and the connectivity it has allowed, is that it would level the playing field, flatten the world, and allow everyone and anyone to participate. So far, that promise has yet to be realized. In fact, many of the books we’ve covered here over the last year—Brotopia, Winners Take All, Silicon States, Gigged, Broad Band—have been a catalog of how tech, and the tech economy, has shut people out, increased inequality, perpetuated and worsened power imbalances and discrimination in society. Calling attention to these problems is an important step to addressing them, but there has not been a lot in these books that has left me feeling hopeful that there is a ready solution is at hand, or that it will actually be implemented by those at work building the infrastructure of the future and profiting from it.

Holmes is a proponent, and practitioner, of inclusive design. She worked for Microsoft for much of the last decade, and joined Google this year, so she’s doing that work where it’s most critically needed. And she hits the proverbial nail on the head when she writes:

For better or worse, the people who design the touchpoints of society determine who can participate and who’s left out. Often unwittingly. A cycle of exclusion permeates our society. It hinders economic growth and undermines business success. It harms our collective and individual well-being. Design shapes our ability to access, participate in, and contribute to the world.

This is a problem that’s been with us long before big tech and the age of computer algorithms. Inclusive design itself is a term that’s been around for decades, mostly in landscape architecture and urban planning—perhaps most widely recognized in disabled-accessible playground design—but it has found little application in business and tech. Holmes is remedying that. But what, exactly, is inclusive design? Susan Goltsman, a pioneer in the field and an early mentor of Holmes, had a definition of inclusive design that Holmes cites as her favorite:

Inclusive design doesn’t mean you’re designing one thing for all people. You’re designing a diversity of ways to participate so that everyone has a sense of belonging.

When we think of inclusion and exclusion, we tend to look at our own lives. We consider our social circles, our circles of concern and influence—our family, friends, and colleagues, and the “resources we believe are critical to our survival and success.” But that mindset of us on the inside of a circle and others on the outside, Holmes warns, “can make it seem like exclusion is a fixed state, rather than an active choice.” She reframes it as a habit we can kick, a cycle we can end:

What makes exclusion a cycle? It’s the enduring notion that “we shape our tools and thereafter our tools shape us.” What we produce has an effect on society, which in turn shapes the next set of problems we aim to solve. A solution becomes a barrier when it’s designed only for people with certain abilities.

You can see this easily on a playground, or in architecture (stairs are a perfect case-in-point), but how does it apply to tech? John R. Porter, who Holmes met when he was a design intern at Microsoft, provides a helpful perspective. Porter, who relies on the use of a wheelchair and assistive technologies to extend his own abilities, has a “Wall of Exclusion” in his home on which he has displayed the different generations of gaming device controllers—from Atari to the Xbox—which he lost the ability to use at the age of ten. He is now part of a community of gamers online that develop hacks to play games without a controller. He explains how World of Warcraft has, intentionally or not, become a favorite among this community:

There are players who don’t have the motor ability to interact fast enough to engage in combat. But I know people with disabilities who have played this game for years. They have all of their crafting skills maxed out because for them, the game isn’t about doing quests.

The game is economics.

The game is building a leather-working empire and making gear people can buy from them.

Someone who has actually experienced such a mismatch in access, whether because of ability, hidden bias, or outright discrimination, can help resolve it in creative ways because they’ve likely already done so in their everyday lives. This differs, Holmes writes, “from a person who tries to make a solution based on stereotypes and benevolent pity for someone they perceive as unlike themselves.” The troubling aspects of the latter approach can be seen in the nation’s traditional approach to low-income housing. Holmes cites Detroit’s Brewster-Douglass Housing Projects as example:

Brewster-Douglass was built for low-income African American families. But who created the design? Who chose what to tear down and what to rebuild? What was their cultural agenda? Its construction and deconstruction happened without any meaningful inclusion of residents.

Tiffany Brown grew up in Herman Gardens nearby, which has also been demolished since. She is now one of just around 400 African American female architects working in a profession of 110,000 in the United States. Her latest initiative, 400 forward, aims to change that. When Holmes asked her how design shapes inclusion, and vice-versa, Brown offered this:

I would sum it up with a latin expression, “Nihil de nobis, sine nobis” or “Nothing about us, without us.” […] This expression has largely been disregarded in relation to design.

Brown tells the story of the recently unveiled Q-Line transit system in Detroit, which when first opened, didn’t offer any instruction on how to pay with cash, which many city residents rely on.

As a result, it became a way to transport a certain class of people from midtown to downtown and bypass those excluded people. It rides alongside the city bus, making stops at the same traffic lights, held up in the same traffic.

“This practice isn’t isolated to architecture,” Holmes explains, “It happens in many areas of design, including digital environments.” Holmes cites Cathy O’Neil’s Weapons of Math Destruction to warn of how “machine learning is amplifying the cycle of exclusion on a massive scale.” What we need is human intelligence and the expertise of excluded communities to counter it.

Technology has a lot to learn from humans. In particular, from humans who have a deep understanding of mismatched interactions. Their expertise guides better questions, as well as better solutions.

She also provides a quick peek into the story of astronomer and mathematician Adolphe Quetelet, “derived from Todd Rose’s exceptional book, The End of Average.”

His motivation was to fit all aspects of society to this average while dismissing any human who deviated from that norm as abnormal. This motivation has endured, whether implicit or explicit, through generations of his intellectual descendants, including many current designers, engineers, and marketers.

This matters more than ever as data science grows in prominence. All of us are feeding that growth by interacting with computers that record more information about our behaviors than ever before. But data is just data. It doesn’t provide answers. The art of drawing conclusions from data is knowing how to collect, organize, and make sense of it.

Taking time to qualify human depth and complexity, even with a relatively small number of people, can help balance the shortcomings of “big data.” “Thick data” is gathered information that explains human behavior and the context of that behavior. It was first described as “thick description” by anthropologist Clifford Geertz in his book The Interpretation of Cultures. Thick data is a way of understanding how people feel, think, and react and the underlying motivations.

Holmes explains how big data can act like a heat map highlighting areas and interests to investigate, while thick data can provide a clearer human understanding of why those patterns exist and help to design more inclusive products and environments.

Her focus on exclusion is informed by her family history. Her father was detained as a child, along with his family, at Angel Island under the Chinese Exclusion Act. His father and toddler-aged sister died of respiratory illness soon after being released, leaving his mother and him to make their way alone in an unfamiliar country. But it is also informed by her family’s present, by witnessing her father aging:

With my father, I recognize how my future body will change. My hearing will fade by the time I’m seventy. My eyesight will cloud over and grow noticeably worse at night. My memory will remain sharp on some details, and I’ll start to forget others. My arms and legs will lose their strength. How will the design of my environment ensure that I can participate in society, rather than becoming socially isolated with age?

When thought about in that way, disability is less an individual health condition than a mismatched societal interaction we will all have with our surroundings someday. In that way, we can shift the onus to the designers who devise the ways in which we navigate the world.

Disability is critical to any conversation about exclusion. It touches everyone’s life, eventually. Yet disability is commonly understood as applying to only a marginal percentage of the human population. This is simply untrue.

And when we are mindful of that when we design solutions, its benefits are felt society-wide. Holmes points out that a solution for a one armed person (permanent) is equally effective for someone with an injured arm (temporary), or a new parent who often has the use of just one arm while holding their child (situational). Closed captioning is another good example. Developed in the early 1970s to make the audio content on television accessible to the deaf and hard-of-hearing (which, Holmes points out, is all of us if we live long enough), it not only serves the 360 million people of the world with deafness or profound hearing loss, but those in crowded bars and airports, and those on perusing the increasing amount of video content on social media on their smartphones or computers in a setting where they can’t turn up the volume. Voice recognition software was similarly developed for people with physical disabilities, but is increasingly used by all of us in everyday life to navigate the world. There are countless other examples in the book.

At a time when much of our political discourse is exclusionary, whether it’s of immigrants looking to join our society or stories of the president yelling at architects to remove the braille from his building’s elevators because he didn’t believe there would be blind people living in Trump Tower, Kat Holmes offers us the hope and tools of inclusion to build a better world, a world we are already building.

When we break from the past, how we get to the next stage has an impact on who can move forward with that progress and who’s left out. What does it take to shift long-standing cycles of exclusion?

Exclusion is a universal human experience. We’ve all felt what it feels like to be excluded at one point or another—from a game on the playground as children, from an afterwork outing as an adult—and it hurts. Some people and some communities experience exclusion far more, seemingly as a matter of course. But it doesn’t have to be that way, and learning from their experience may be our best hope for building a more inclusive society. 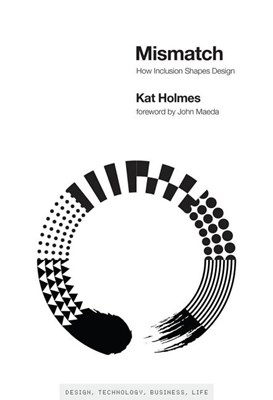