Mutualism: Building the Next Economy from the Ground Up

Sara Horowitz's new book is based on an idea that is as old as humankind, and a tradition that is so entrenched in our country that we don’t even notice it. But it is still going strong even if it has been eroded. It is the idea of an “economic system of mutual obligation.” 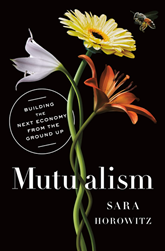 Mutualism: Building the Next Economy from the Ground Up by Sara Horowitz, Random House

It may seem boringly bureaucratic and picayune to some, but one of the larger developments for many people during the pandemic has been that they, as freelance workers, became eligible for unemployment benefits. It has been a lifeline to many who work outside of traditional employment arrangements, which is a part of the labor force that has been increasing steadily for decades—both by worker’s own choice in the matter, and because of companies' largely successful attempts at misclassifying their workers as independent contractors.

Sara Horowitz, the founder of the Freelancers Union and the Freelancers Insurance Company, has been working on organizing these workers since she found herself one of them, classified as an independent contractor by the progressive law firm she went to work for after graduating law school, and therefor ineligible for basic benefits like health insurance. It was ironic, at best, for someone they were hiring as a labor lawyer.

It is another seemingly boring, bureaucratic, and picayune matter, but I’ve always found the history of insurance to be fascinating (yes, I get teased), from its beginnings in mutual aid societies to how it ended up being tied to one’s employer in the United States. It is a system unique to our country, and it made some sense in a world when labor and management were tied together in an industrial era arrangement and social contract. But most workers today don’t even consider themselves “labor,” and aren’t organized as such, and more and more aren’t tied to any single employer. At a time when a decent amount of business literature celebrates the entrepreneur (even as entrepreneurship itself is in decline in an era of industry consolidation) over the employee, we are now hashing out who even deserves that latter, supposedly lesser, classification. And, up until 2020, most worker benefits were tied to it. Even with the change in unemployment, most still are.

In her work organizing freelancers, Horowitz found that the system was failing workers in ways that neither side of the political spectrum was addressing. The left had largely abandoned its commitment to organized labor while the right actively worked to undermine it. With that understanding, combined with lessons she learned through her work, her family’s history in the labor movement, and her research into other movements, she has written a new book that focuses on how workers can build a new safety net for themselves. As she sees it:

Building the next safety net will require us to shift our cultural frame away from an expectation that government or markets will continue to be in a position to solve all our problems for us. Instead, workers must begin to build their own solutions to these problems and to charge their elected officials with recognizing and protecting those new solutions.

The name of the book, Mutualism, is based on an idea and a tradition that is so entrenched in our country that we don’t even notice it, but that is still going strong even if it has been eroded. It is an “economic system of mutual obligation.” It is a practice as old as humanity itself, and one that was especially prevalent in almost every aspect of life in early America, but that is mostly seen in our society today in four places: Religious Organizations, Mutual Aid Societies, Cooperatives, and Labor Organizations. Horowitz explains that such mutualist organizations have three things in common:

3. Mutualist organizations have a long-term focus. They are intergenerational institutions with leadership infrastructures and capital strategies that equip them to serve future generations. They are built to outlast their members.

One especially inspiring section of the book is a chapter about A. Philip Randolph and Bayard Rustin, who used the vast and long-standing tradition of mutualism and its “grassroots ecosystem” in America, especially in the African American community, to organize the March on Washington for Jobs and Freedom in 1963. The march’s roots in mutualism are evident in the organizations they invited to sponsor it, which were limited in Rustin’s own words to those “only from established Civil Rights organizations, from major religious and fraternal groups, and from labor unions.” As Horowitz writes:

These were institutions that understood how to move the levers of power and engage in the political process, institutions that could tolerate a variety of different views and recognized that there was strength in solidarity nonetheless.

They were also institutions that could fund the trips of their members to Washington and organize them to get there. A career of organizing made Randolph and Rustin ready to welcome them, down to the details of how many doctors and first aid stations to how many toilets they’d need to set up—even offering suggestions that participants should pack two box lunches for the day and what they should pack in them. It was not their first foray into organizing. In fact, Randolph and Rustin had organized a previous March on Washington together to end segregation in the military and defense industries, calling it off only after FDR issued an executive order prohibiting discrimination in defense jobs in 1941, the first time the government had made such a move.

The march, where Dr. Martin Luther King Jr. delivered his famous “I Have a Dream” speech, was the culmination of two storied careers in organizing. Randolph was elected president of the newly formed Brotherhood of Sleeping Car Porters (the Pullman porters’ union) in 1925, and was responsible for integrating it into the larger American Federation of Labor a decade later, overcoming the AFL’s often openly racist history to do so. Rustin was almost singularly responsible for bringing nonviolence to the Civil Rights Movement, having “travelled to India to learn about Gandhi, the Salt March, and Gandhi’s theories of nonviolence directly from Gandhi’s followers” soon after Gandhi’s death, and passing those lessons onto Dr. Martin Luther King Jr. during the Montgomery bus boycott.

Horowitz has made her own pilgrimages abroad, bringing home lessons on organizing mutualist communities from the cooperatives of Emilia-Romagna in Italy and the Basque region of Spain. Writing about an Italian law passed in 1992 requires cooperatives to put three percent of their profits into capitalizing new cooperative ventures, Horowitz explains how…

These funds are managed by experts—experts who in any other context would be called venture capitalists. But these are venture capitalists of the cooperative world, who have to make decisions about where the funding will go based on which enterprises have the greatest chances of success. They are doing this within a local, deeply interconnected ecosystem and are concerned first and foremost with making sure there is high employment in the region …

This, among many other laws, helps support a community based in Emilia-Romagna that was formed by Italians that had fought against the Nazis and Italian fascism in World War II, and then came home to build the future they were fighting for—a local cooperative based economy, where co-ops account for one third of the region's GDP, and two-thirds of its citizens are members of a co-op.

But her pilgrimage also includes forays into America’s past, when people built the social networks that became the unions that built so much of America and its post-war social contract. From the Triangle Fire to the Freelancer’s Union, it is a history of the labor movement—and of her family’s fascinating involvement in it, which is as entertaining as it is relevant to a discussion about how such mutualist organizations can influence a family’s life for generations. But it goes back even further and farther abroad, and is much more about our future than our past. It is about what workers must build today to meet their own needs.

It asks questions like, What if “profits were just a byproduct of success,” that were then used to create more successful enterprises? What if, instead of turning to businesses and government to solve our problems, we turned to each other, and built new networks, new institutions and organizations, for ourselves and for the future? And…

What if they recycled capital back into the community rather than extract it?

She will also show you that there are plenty of examples, hidden in plain sight, for how we can do so. As how, when we do, perhaps…

Freelance software designers in San Francisco may realize they have more in common with factory workers in western Pennsylvania than they do with the men and women who run Apple, Facebook, and Amazon. Uber drivers in Queens may realize they’re not so different from freelance writers in Los Angeles. Farmers in the reddest heartland states may realize they share an economic model with some of the bluest grocery stores in Brooklyn.

The withering of the industrial era social contract, and of the institutions and organizations that once brought us together, has left American workers experiencing and epidemic of loneliness. And, as Horowitz sees it, “Loneliness isn’t just an inconvenience. It’s an existential threat to the American workforce.” In the midst of this pandemic, we have been physically cut off from one another, but we have also been reminded that we are not truly alone. As Jennifer Ashton writes in The New Normal, "we’re all grieving together—and getting over it together,” which “has given us all a stronger sense of solidarity.” Maybe, just as we agreed unemployment benefits should be extended to the freelancers that make up so much of our workforce today, we can see ourselves all as workers, working together, to build something new. Mutualism offers that vision as an already forming reality—highlighting organizing efforts and organizations that, “As they grow [will] in turn transform the economy to put human beings, and the planet, at its center”—that we can all tap into and contribute to. 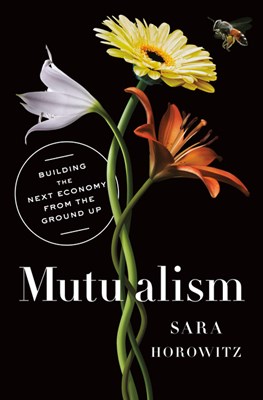 Mutualism: Building the Next Economy from the Ground Up