On Quality: An Inquiry into Excellence: Unpublished and Selected Writings

This new collection of Robert Pirsig's writings takes on the fundamental nature of existence, and our effects upon it, and centers it all around the concept of "Quality." 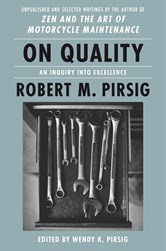 It was while discussing the book Shop Class as Soulcraft with Jack Covert that he told me that one of his favorite books was Robert Pirsig’s Zen and the Art of Motorcycle Maintenance. I had read the book in high school, when I couldn't possibly have understood it as well (intellectually, at least) as I would have if I’d waited until I was older, but the book left a lasting impression on me. Jack sharing his love of the book with me left an impression, as well. So when I saw Pirsig’s On Quality cross my desk recently, I knew I had to review it for the company Jack started.

And, at the same time, I’ve found it nearly unreviewable. It is like the word “Quality” itself, which Pirsig believed is both undefinable and can be defined in an infinite number of ways.

Diving into the book, I was at first struck by some random, incidental coincidences I found in my own, individual mind and experience. Seeing how the book is an Inquiry into Excellence, I remembered Jack’s story of how he happened upon the business model of selling books in bulk after noticing a customer come into the bookshops to buy multiple copies of Tom Peter’s In Search of Excellence. “It was at that point,” he once told me “that I realized business books could be sold in boxes.”

I made a mental connection between Pirsig’s second book, which was An Inquiry into Morals, and Adam Smith’s much ignored but perhaps more important book, Theory of Moral Sentiments—which grounds and rounds out The Wealth of Nations. It occurred to me that both of those books were the genesis of something larger—of the business book genre and capitalism itself, both of which I have worked within the framework of most of my adult life, and that Pirsig’s notion of Dynamic Quality is larger in scope than both. Yet this book, edited in the years since his death in 2017 by his wife and collaborator Wendy K. Pirsig, is rather slim—a quick read, even.

In the essays, letters, speeches, and excerpts On Quality pulls from, Pirsig spoke of two different kinds of quality. Dynamic Quality is existence itself, and our experience of it in the present moment. Then there is static quality, which is the result of our cultural conditioning and the ways in which we intellectualize and institutionalize Quality. That static quality can be and often has been a positive in the world, but Pirsig also offered this critique:

[O]ur cultural drives toward quality have been on the whole crude and primitive. The great engines of social change have not had much time to rise above simple demands for more food, clothing, and shelter, aimed at a satisfaction of the most basic desires. As these desires are satisfied by technology for huge masses of people, however, a new problem arises. What next? Our society must shift from one having developed highly complex means toward simple goals to one less focused on the means and more on the goals themselves.

By defining Dynamic Quality, Pirsig was, I believe, trying to come up with a common, modern language for something we’ve only ever reached for in religion. And though the critique above is one that includes our technology, he described what he was doing in Zen and the Art of Motorcycle Maintenance as, in part, an attempt to “relate human values to technological values, and try to provide a uniform base by which one could get from one to the other.” As a technical writer working in the factories of the Upper Midwest, he saw beauty in the precision and artisanship of the machinists working there. I find this an incredibly important aspect of his understanding of Quality, especially as our technologies are becoming ever more entwined in our everyday lives and environment. As he saw it:

Quality is the continuing stimulation which our environment puts upon us to create the world in which we live. All of it. Every last bit of it.

Quality isn’t just what we yearn for, but the reason for our yearning, the inherent state of the world we are trying to capture in our reconfiguration and our creation of it.

If you want to build a factory, or fix a motorcycle, or set a nation right without getting stuck, the classical, structured, dualistic subject-object knowledge, although necessary, isn’t enough. You have to have some feeling for the quality of the work. You have to have a sense of what’s good. That is what carries you forward.

Because Quality is left intentionally undefined by Pirsig, and is according to him undefinable, there are no best practices for this work. It is the antithesis of dogma, a constant discovery and rediscovery, seeing with a beginner’s mind even when working with expert hands. And it requires great care. As Pirsig wrote in Zen and the Art of Motorcycle Maintenance:

Or, put another way:

The place to improve the world is first in one’s own heart and heads and hands, and then work outward from there.

But Pirsig’s beliefs about quality extend beyond the ourour individual perception, lives, and the work we do. I want to say it is the fundamental substance of life, but it goes beyond even that:

Physicists have talked about a theory of everything, but it is only about everything composed of substance. Love, for example, is not included in a physicist’s theory of everything. Neither is society, or beauty, or morality. […] But if you take the word “quality” and try to substitute it for “substance” as the central reality of the world, you get a much different explanation of things.

It is, Pirsig believed, the underlying reality we exist in, and it is our fundamental imperative simply to experience it, in both action and deed, to realize it what we create.

The purpose of each person’s life is not just self-gratification. It has a much larger moral purpose, but by this is not meant some narrow-minded Victorian social constraint. A person should contribute to the quality of the world.

I am not sure I’ve contributed much to the quality of the world with this review. I can’t seem to get it quite right, or to convey exactly what I’m thinking and feeling about what I’ve read. The piece Wendy Pirsig uses as the Introduction to the book is an address Bob gave at the Minnesota College of Art and Design about the creative process, about how sometimes it just doesn’t work when you’re pursuing it too directly. Maybe that’s what is getting in my way. But I know this book contributes to the quality of the world, and I think Jack would be happy that I’ve picked it up and given it a shot. 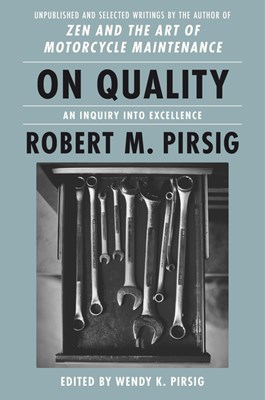 On Quality: An Inquiry Into Excellence: Unpublished and Selected Writings