Sallie Krawcheck was long one of just a few, and one of the most senior, powerful women on Wall Street. In 2008, she was fired from her job as CEO of Citi’s wealth management business for advocating something unthinkable on Wall Street, that they reimburse their clients some of the money they had lost on their investments—investments that were riskier than assumed by the firm and had assured to clients, and that lost most of their value as the economy tanked in the financial crisis. She was stonewalled on the issue by her superiors, and broke ranks with them to take her analysis and argument on why it would be the right thing for the company to do—ethically and, in the long run, financially—all the way to the board of directors. She assumed pushing the argument would cost her her job, and that they probably wouldn’t return the money anyway. She did it anyway, and within months she was fired. But she was successful in getting clients partially reimbursed.

Maybe I was right in taking that stance; maybe I was wrong. One can certainly argue the point both ways. But what we can’t argue is this: it would have been better for Wall Street to have had more of those kinds of disagreements, rather than fewer of them.

Taking honest, principled stances in the service of clients was something she had already had a track record of—such as when she got Sanford Bernstein out of the investment underwriting business when she saw it was conflicting with serving their investment clients. It was a move that cost the firm money and lost it some talent to other firms in the short-run, but when the internet bubble burst in the late 1990s and ended up costing those other firms that did have conflicts of interest hundreds of millions in regulatory fines, her face was plastered on the cover of Fortune magazine, along with the words “The Last Honest Analyst.”

She credits those client-focused, courageous decisions, in part, to her being a woman:

Studies show that women are more empathetic. We are more risk aware. We take a more nuanced, long-term view when making decisions. We focus more on relationships, on people.

One way to combat short-termism in business then, as Krawcheck contends in her new book, Own It, is by getting more women into business, and into leadership positions in business. But it's not enough to have them there. Many business books for women tell women how to act more like men to advance in the careers—lean in, negotiate more forcefully, ask for that raise. Krawcheck insists that, in business, “We need more women acting more like women.” Not only for the success of themselves, but for the success of their businesses and the overall economy. Even in the wonderfully titled “Obligatory Ask-for-the-Raise and How-to-Negotiate Chapter (with a Twist)," she argues that:

[T]here’s a way to negotiate for those raises—and other things we want—by playing to our strengths rather than playing a part, and making it a win for both sides.

And it is not just her saying this. Geoff Colvin’s 2015 book Humans are Underrated is one of many over the past few years that have argued that, as automation and artificial intelligence advance into the workplace, the most valued skills are shifting to things like social and emotional intelligence, empathy, and communication, that there is a shift from “knowledge workers” to “relationship workers”—i.e. more traditionally female traits, skills, strengths.

So, yes, we women are different. And therein lie our greatest strength and competitive advantage in the modern workplace.

Krawcheck wants women to double down on the way they are hardwired intellectually and emotionally (which, of course, isn't universal, but is different than men), right as their traditional strengths are becoming most valuable to business and the economy, right at the time society and technology open new avenues of opportunity and career options to women, and their economic and purchasing power is increasing. "But," she insists, "it’s not just enough to hold that power."

We need to own that power and put it to work. And that can’t happen until we throw out the old playbook and stop buying into the dogma that to succeed in business we need to play by men’s rules or operate within the walls of the box as they exist today.

I am not a woman, but I have been a feminist since I learned it was possible for a man to be a feminist, which was in a humanities class I took when I was 15. I don’t believe in many “isms” because I find them too dogmatic and rigid to be realistically applied in the real world, and historically disastrous when they are shoehorned into existing societies. The feminist movement, however, has been remarkably successful over the years, but there is an argument that even it needs to change now to survive and serve society, one that Krawcheck seemingly agrees with when she writes:

Has feminism hit a plateau? Only if we continue to do the same things—and expect different results.

But I am not reviewing Own It because I’m a feminist; I’m reviewing because I’m a pragmatist. It simply makes good business sense. And that is why Krawcheck wrote it. As an analyst with a lot of time on her hands when she was fired, she dove into the causes of the financial crisis, and found that it was largely due to groupthink, and a solution would be greater diversity on Wall Street—diversity of thought, background, and in every other way, but with gender diversity being a key.

[T]he business world is changing—fast—and it’s changing in ways that play to our strengths. This places us on the brink of a seismic shift in the traditional power structure: one with significant implications for women in business. And it’s a shift that begins with recognizing the power we already have—and using that power to accelerate these changes.

And that is why Krawcheck is “over the whole notion of women being empowered.” She isn’t interested in power being given, but in women leveraging the power they already have, for their own advancement and that of their companies—even the world.

The book can be profoundly depressing at times—when you look at the gender disparity statistics that still exist in the workplace, or when she tells stories of encountering blatant sexism and horrific sexual harassment in her own career. But it is more hopeful and optimistic than anything.

It is also hopeful, in that this book is part of a trend we see occurring in business books. We’ve covered books that were overtly feminist—What Works, Who Cooked Adam Smith’s Dinner?, Unfinished Business, and more—many times over the last few years. And it’s not because we’re feminists or academics or politicians, it’s because we’re business booksellers, and these are some of the best business books that have been published these past few years. All of the evidence has shown that this movement is simply good for business.

We received a note in response to naming What Works the 2016 800-CEO-READ Business Book of the Year criticizing us for making a political decision, saying they believed gender equality was a hot-button issue we were attempting to capitalize on. We think gender equality is an issue that every business should try to capitalize on—by making it a reality. Sallie Krawcheck’s conversational, courageous, irreverent, thoughtful, funny, feminine voice is a very powerful addition to that conversation. She reminds us that women don’t have to, and shouldn’t, change to be in business—that business is in fact better off if they don’t try to think and act like men, and that we’re all better off as women recognize their power and own it in the workplace and the world. 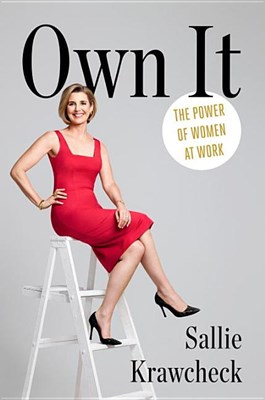