Dan Ariely's new book takes us on a journey into the complex nature of human motivation. Dan Ariely’s new book, Payoff: The Hidden Logic That Shapes Our Motivations, begins on a painful note, with him relating the story of receiving a phone call from a stranger asking him to help a young man that was in the hospital, having been badly burned in a fire. The reason he received this call is that, through a mutual acquaintance, the mother on the other end of the phone knew that, as a young man, Ariely had spent three agonizing years in the hospital himself after sustaining burns over seventy percent of his body.

It was a painful experience for Ariely that recalled the excruciating pain he had endured during that treatment. And, yet, instead of turning away from that pain, it motivated him to help, it gave him a sense of meaning and purpose and connection. In a book about the complexities of human motivation, it is a great opening reminder that “the things that give us a sense of meaning don’t necessarily make us happy.”

Ariely is still physically affected by the burns he sustained when he was seventeen. His range of motion is sometimes limited, and he can’t use his hands very well at times. It’s one of the reasons he chose the path of the professor and author—work that’s been made easier by digital recorders and voice recognition technology. It is work that has resulted in three New York Times bestsellers,  Predictably Irrational, The Upside of Irrationality, and The Honest Truth about Dishonesty. It is work that’s taken him out on the lecture circuit and into organizations to study human behavior and motivation, work that has led to his new book, Payoff.

He begins the first chapter telling us of a team of engineers at a large software company he was hired to speak to about decision making. They had recently arrived at the end of a two-year project they had worked hard on, and were enthusiastic about, only to have the project scrapped. Not only was the initiative scrapped, there was no inquiry into whether the work they’d done had other applications or implications or merit for the organization, no follow up to keep them engaged with that work in any way. They were all being assigned to other teams and projects, and there was no effort put together a diagnosis of the work they’d done or the journey they’d been on together. The sense of disengagement and demotivation in the room was palpable. Ariely told the group:

“The problem is that [any follow up initiative] could require more expenditure of time, money, and effort, and it seems like your CEO doesn’t see the value in investing more in this project simply because he doesn’t understand the value of investing in your motivation.”

Even a simple acknowledgment of the work, the extraordinary time and effort they’d put in, could have acted as a balm to their disappointment on the project.

Acknowledgement is a kind of human magic—a small human connection, a gift from one person to another that translates into a much larger, more meaningful outcome. … we can increase motivation simply by acknowledging the efforts of those working with us.

People view this as the “soft” side of management, but it is not really soft. It is hard, human work, and the advantages and productivity gains of engaged, motivated employees are backed by hard data. Your intuition may tell you that it’s not really that important, that it may help a bit, but not as much as investing in technology or other operational infrastructure. Your intuition would be wrong.

Ariely tells us that bosses that neglect to put in this human effort are “systematically underestimating the importance of meaning at work,” and that, in general, “People dramatically underappreciate the extent and depth to which a feeling of accomplishment influences people.” They also overestimate the extent that pay acts as motivation. That doesn’t mean you shouldn’t take care of your people by paying them well; but that you should take care in how you pay them. For instance, in an experiment he conducted with Uri Gneezy, George Lowenstein, and Nina Mazar, he tells us that:

One of our main findings was that when bonus size became very large, performance decreased dramatically. This counterintuitive effect stemmed from the stress and fear of possibly not getting the bonus.

Because most companies have some sort of bonus structure, studying their effect became their “white whale,” and Intel allowed them to take their experiment into the real world. They did a study that offered workers in a semiconductor factory either a cash bonus, pizza voucher, or a simple compliment for meeting a productivity target. They found the cash bonus was actually the least effective in boosting performance. And not only that, performance actually dropped overall in the following days when the bonus was removed. When they weren’t offered the same cash reward on the second day, the workers felt disincentivized because they were no longer being offered anything. A single compliment on their work wasn’t enough to sustain performance over the long term, either, but the productivity dropped back toward the mean of the control group that received no incentive more slowly, and at least a compliment couldn’t be taken away.

People also want to feel as if they’re contributing to the process, that they’re actively involved in making something. To illustrate the point, Ariely tells the story of a cakemix developed by P. Duff and Sons in the 1940s. The mix was basically ready-made: all you had to do was mix it with water, pour the batter in a pan, and plop it in the oven. The company was baffled when the mixes didn’t sell. It was only when they removed the egg and milk powder and made it slightly harder to use—now requiring those using the mix to add fresh eggs, oil, and milk—that the mixes began to sell. Ariely draws this conclusion:

The Duff cake mix story offers a simple and clear example of the power of effort and ownership and how it relates to motivation. It shows that when we work harder and spend a bit more time and effort, we feel a greater sense of ownership and thus enjoy more the fruits of our efforts.

Think about that as you consider what work you can automate in your business, and what the effect will be. People don’t want their work to be just adding water or baby sitting machines.

It seems the more we understand about human motivation, the more complex it becomes. The industrial-era understanding of labor for capital still holds sway in business, but it is losing some of its luster, and Gallup surveys show employees are becoming increasingly disengaged from their work. What you must understand to reverse that trend in your own organization is how to motivate people, and how to make investments in that motivation.

There are plenty of books about how to motivate people in the workplace. Ariely certainly has a lot to say on that topic, and he doles out those lessons quickly and with clarity. But he actually goes much deeper than that. Payoff is about what intrinsically motivates us as people, not just employees. It is about the nature of work and human nature, and how those can exist symbiotically in a modern organization. It’s about how to connect to our work, and each other, more deeply and meaningfully.

Ariely says “this book is about what we really want out of life before we die.” I would say that it is about how we can all take care of one another. 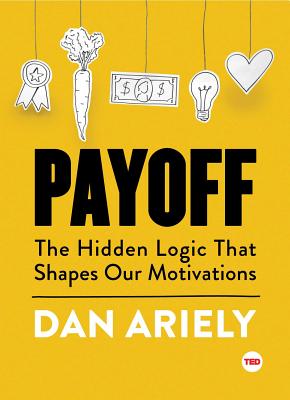