Perennial Seller: The Art of Making and Marketing Work that Lasts

Ryan Holiday has given us a guide to making creative work that lasts—beginning with the creative process itself, through the positioning and marketing of it, to building a platform upon it. Ryan Holiday is a voracious reader (if you’re following us, you really should be following his reading list, as well), so it’s no surprise that his new book, Perennial Seller: The Art of Making and Marketing Work that Lasts, draws its inspiration from a 1938 book written by a British literary critic you’ve probably never heard of. That book, Enemies of Promise by Cyril Connolly, has gained something of a cult following in the 80 years since it first appeared—even meriting a new printing in 2008 from the University of Chicago Press. The topic of Connolly’s book is how to create just such a lasting success—“an inquiry into the problem of how to write a book that lasts ten years”—of which Holiday asks:

Is that not the kind of lasting success that every creative person strives for? To produce something that is consumed (and sells) for years and years, and enters the “canon” of our industry or field, that becomes seminal, that makes money (and has impact) while we sleep, even after we’ve moved on to other projects?

(Moving onto other projects may be a part of creating such a success, but more on that later.)

Holiday’s book expands upon that mission and broadens it to all creative pursuits—whether it’s writing a book or founding a startup. Not content to simply pull back the curtain of currently in vogue advice out there, he tears it down and sets it on fire. Discussing how most creators don’t have much of a shot at creating something of lasting value, he writes:

It’s hard to see how it could be otherwise when the top “thought leaders” and business “experts” deceive us with shortcuts and tricks that optimize for quick and obvious success. Creators resort to hacking bestseller lists, counting social media shares, or raising huge amounts of investor capital far before they have a business model. People claim to want to do something that matters, yet they measure themselves against things that don’t, and track their progress not in years but in microseconds. They want to make something timeless, but they focus instead on immediate payoffs and instant gratification.

Holiday’s first book, Trust Me, I'm Lying: Confessions of a Media Manipulator, was his opening salvo against this world, a world he excelled in. He still has the tools he used there, and he’s not shy in using them in the service of great work, but he stresses that the creative process, the act of bringing something new into the world where there was nothing, must take precedence. You must focus on making something worthwhile and potentially lasting first, and whether you’re writing a book, making a movie, or building a business, that work is hard enough.

It is a point Holiday uses some of the world’s greatest creative successes in those fields to help him illustrate. “Writing a book is a horrible, exhausting struggle,” said George Orwell, “like a long bout with a painful illness.” “Being an entrepreneur,” Elon Musk tells us, “is like eating glass and staring into the abyss of death.” And, speaking of filmmaking, Warren Beatty often tells people: “I always say making movies is like vomiting. I don't like vomiting. But there is a time when you say, ‘I'll feel better if I finally throw up.’”

Still interested? It can seem daunting to set out to create a classic work or a company that lasts, “but classics,” Holiday insists, “are built by thousands of small acts. And thinking about them in that way allows you to make progress.” It also disabuses us of the notion that great work is produced by a flash of inspiration, genius, or a singular idea. Creativity is not a spontaneous event, but a process, and the product of a lot of hard, deliberate work. And, to do that work, it helps to give yourself creative space from what’s going on around you:

Ignore what other people are doing. Ignore what’s going on around you. There is no competition. There is no objective benchmark to hit. There is simply the best that you can do—that’s all that matters.

So, Perennial Seller is, first, a book about digging down and making meaningful, truly creative work. Everything that comes after must be grounded in it. And yet, while it is paramount, the creative process is but the beginning of the overall process. At this juncture, Holiday says, you are just “halfway to the halfway point.” Before you even consider how to put your work out into the world, you have to figure out how to position it. And that is the second part of just the first half of the book. The first part of the book, on the creative process, is by turns admonishment, encouragement, and inspiration, and it makes for some great reading. It is full of wisdom, but not a lot of actionable, real world business advice. It is in part two, on positioning, where the book begins to offer much more tangible advice and instruction.

For instance, his “One Sentence, One Paragraph, One Page” writing exercise will help bring internal clarity to what your project is all about, or what your company does, and more importantly who it’s for, so you can clearly explain it to others. Hopefully, you had an audience or target market in mind while you were in the midst of creation. But even if you did, that’s no guarantee you won’t have to blow the whole thing up when you start testing it out and sharing it with others. He tells us how his last book, Ego is the Enemy, was originally going to be a book in defense of humility rather than against ego. The Pixar movie Up , the charming tale of a senior citizen and his boy scout sidekick piloting a house held aloft by balloons toward adventure, was originally conceived as a story about “two princes who lived in a floating city on an alien planet.”

It is this section that helps you deal with the often uncomfortable dilemma of commercializing your art and making a business out of it, if you have such personal hangups. But the key lesson of positioning is determining your audience. “Many creators want to be for everyone,” he tells us, “and as a result end up being for no one.” It is for that reason that:

Picking a lane isn’t limiting. It’s the first act of empowerment we take as a creator.

All of this hard, necessary work just to get to the point where so many want to start: marketing and platform building, which make up parts three and four of the book. Here, Holiday pulls out the old tricks that aim to garner some immediate attention when it first hits the world, along with a longer-term vision to turns the project into a perennial moneymaker. He’ll talk about the importance of a proper launch, and teach you how to execute one—including how to price it initially (or not)—how to find champions of your work, and how to gain real momentum and “trade up the chain” to reach larger media outlets once you have started to build momentum.

And here’s the exciting part. Once we have done that work, and put in the hustle, we get to return to the work, which brings us to part four of the book: “Platform.”

Becoming a perennial seller requires more than just releasing a project into the world. It requires the development of a career.

And so it’s on to the next project. That is true of artists like Holiday's favorite band, Iron Maiden (whose top five songs have around 50 more million streams than Madonna’s top five on Spotify, and still regularly sells out shows of up to 60,000 seats, despite getting almost no radio play), and successful companies like Apple. If you stay focused on continuously producing great work, perhaps you’ll stand the test of time like Zildjian, the company that produces the cymbals many of the drummers in your favorite bands play, which was founded in Constantinople in 1623, or Fiskars, who makes everything from scissors to axes to lawn mowers, which was founded in Finland in 1649.

In our quest to create something classic, Holiday reminds us that “We are fighting not just our contemporaries for recognition, but against centuries of great art for an audience.”

We all know that instant success doesn’t guarantee lasting success, and that some works we now consider a part of the canon were initially met with lukewarm reception. Shakespeare was considered just one of many talented playwrights in his day, and it was decidedly low-brow fare at the time. Some consider The Shawshank Redemption one of the best films of all time, and while not a flop, it barely recouped its production cost in initial ticket sales. It grossed only $727,327 the weekend it was released. The big winner that weekend? Timecop, starring Jean Claude Van Damme. Sure, Timecop made a quick buck, but Shawshank is a perennial seller, and there are now “even minor actors in that movie who receive $800-plus checks every month in residuals.” It is a classic.

That’s the dream. To matter, to reach, to last.

It is all about immersing yourself in the creative process, and being able to make a living in the process. It gives you a shot at creating something that endures, a classic, a perennial seller. 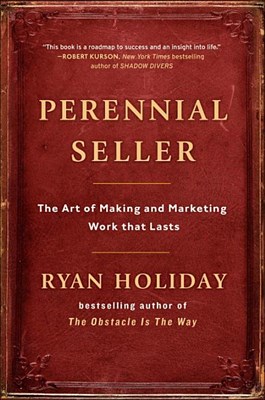 Perennial Seller: The Art of Making and Marketing Work That Lasts