Performance Breakthrough: A Radical Approach to Success at Work

Cathy Salit provides us with tools to keep growing, and teaches us how to take on new roles and mindsets as individuals and organizations. Performance Breakthrough begins with what I think is an inarguable statement: “Meryl Streep is amazing.” But what does that have to do with anything related to us? It turns out, quite a lot. We’re all natural performers, and just as Meryl Streep inhabits the characters she plays on the big screen, we all inhabit the roles we play everyday. We all act, and act differently, according to who we’re with and what the situation calls for. Over time, however, we tend to get stuck in certain roles and find it hard to try out new ones. That limits our potential for growth, and that is where Cathy Salit comes in.

Cathy Salit dropped out of school in the eighth grade—to start her own school. Disillusioned and disgruntled in the school she attended, she and her mother “found about twenty-five similarly disillusioned and disgruntled kids who enthusiastically signed on, lined up some teachers who ranged from poorly paid to volunteer, and took over an abandoned dry-cleaning shop in the neighborhood.” And this was no rag-tag outfit. They were featured in the Harvard Educational Review and wrote a book, published by Random House, about how to start your own school. Ever since then, she has been “breaking the rules and making up new ones,” learning her way through life.

She eventually landed in another experimental group of people—a radical artists’ collective that founded the Castillo Theatre in New York and formed an improv comedy troupe. It was there she discovered the power of bringing performance and improvisation off the stage and into our lives, which would lead her to cofound a company to do just that: Performance of a Lifetime (or POAL). The company spawned from a two-day workshop, put on by friends and colleagues at the Castillo, called “The Play is the Therapy.” Each participant in the workshop was invited onstage, individually and one at a time, and asked to “perform their life in one minute.” They were then given unusual and unexpected direction to do some aspect of the performance radically different, and then performed a forty-five second sequel. The workshop ended with “the 150-person ensemble putting on a sprawling, wildly creative, joyously improvised play that had emerged from the performances of our lives the day before.” People compared the effects of the workshop to "years of therapy, to falling in love, to discovering what the essence of life was about."

That sounds, well, a little… crazy. It sounds even crazier to ask such touchy-feely radicals to bring that kind program into the corporate world, but that's exactly what one participant—a vice president at a financial publishing firm—did around two years into Performance of a Lifetime's history. It sounds just about as crazy as dropping out of school in the eighth grade to start your own school, but once again, Ms. Salit has enticed others—even members of what could be called the establishment—to get on board:

We’ve been helping people expand their performances since 1996 … We help people in the workplace—from staff managers to leaders and leaders-to-be—to perform their way to growth, change, and development. We work with Nike, American Express, Coca-Cola, Chanel, PricewaterhouseCoopers, the Johns Hopkins Hospital, DIRECTV, the US Olympic Committee, JetBlue, and the Girl Scouts of America, to name a few.

And now she’s turned the program into a book so we can all have the process at our fingertips. The book is split into three acts. She opens the book philosophically in Act I, explaining why we should embrace our natural ability to perform, and use it deliberately in our lives and work. In order to do anything, she explains, we have to pretend we know how to do it first, we have to practice, we have to play rather than play it safe. This is where you’ll learn more about the field of performance psychology and POAL’s Becoming Principle approach.

[I]t’s an unusual blending of theater and improvisation, together with breakthroughs in the human developmental sciences, that makes it possible for individuals, teams, and companies to learn, grow, and develop and do things before they know how. Sometimes that means becoming what and who you want to be. Sometimes it means discovering a way to be that would never have occurred to you.

Act II introduces us to The Five Fundamentals of Performance and devotes a chapter to each: “Choose to Grow,” “Build Ensembles Everywhere,” “Listen! The Revolutionary Way to Have a Conversation,” “Create with Crap,” and “Improvise Your Life.” Act III explains how to instill the principles of performance and improvisation in your daily life, and provides exercises and tools to “further develop your performance muscles, mindset, and moxie.” In a note about the nature of such tools, she tells us that:

Performance tools are like [physical] exercise. They don’t produce just one result. They’re like working out at a kind of growth-and-development gym. In addition to helping you solve a problem or meet a challenge, they help you keep developing your creative capacity to improvise, grow, and create change. As your performance muscles grow, you’ll create new tools in an ever-expanding learning and development cycle.

It all begins with an ability to let our guards down, to suspend our belief in the way things are supposed to work and the way we view ourselves. It requires learning to play again, to pretend, to take on new roles and perform our way into them. As Cathy Salit explains, it takes an upending and overthrow of doing business as usual:

I’m far from the first, and certainly won’t be the last, to say that the most creative and innovative ideas occur outside of the mainstream. In order to see and act on new possibilities, we need to untether ourselves from things as they are, from the status quo. We have to be free to experiment, to try and fail, to look like a fool without being overwhelmed by cultural pressure, politics, and belief systems that tell us this is the way things are… period.

It’s an exciting time to be an adult. A generation ago, everyone thought that we stopped developing mentally when we stopped growing physically—that we became the people we would always be when we entered adulthood. Performance psychology and brain science has proven that wrong, that we continue to develop and grow well after our physical growth has stopped. In a similar way, we’ve been told by some that we’re nearing the physical limits to economic growth—exhausting physical resources and new markets—and that may be true. But there is still a wealth of untapped potential in humanity and in human potential, in how we can grow personally and grow together, in what we can become. Performance Breakthrough gives us tools to do that, and to grow in new directions. 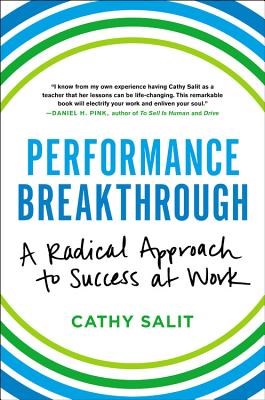 Performance Breakthrough: A Radical Approach to Success at Work