Pre-Suasion: A Revolutionary Way to Influence and Persuade

Robert Cialdini is back more than thirty years after his classic, Influence, with a new book on the topic from another Robert Cialdini released his seminal book on the psychology of persuasion, Influence, over three decades ago. It was included in The 100 Best Business Books of All Time, and the six psychological principles he describes in that book are still used widely in business today. But, as well known and influential as it has been, there are two things that may come as a surprise to readers. First, it was written not to help us figure out how to influence others, but to help make consumers more conscious of how they’re influenced, and to inform them how to resist unwelcome or exploitative attempts at it. And, second, it had little impact and terrible sales when it was first released, to the point the publisher pulled its advertising and promotional funds.

Sales didn’t start to pick up until four or five years after it was released, and they then rose quickly, reaching bestseller levels and remaining there until this day. Cialdini credits the delayed success of the book to a changing of attitudes and the times. Social science and behavioral economics have taken off in popularity since then, and we are now in a kind of “Golden Age” of those fields (which if you read business books with any regularity, you’re already well aware of). Cialdini’s Influence, it turns out, may have been both ahead of its times, and a key ingredient helping encourage and support a change of times when it started to take hold.

Since its release, he has received few requests from the consumer groups he imagined would have interest in the book, but businesses and individuals haven’t stopped calling, looking to leverage his research and understanding in a different way.

So, his new book, Pre-Suasion takes a deeper look at the tools that professional influencers (salespeople, marketers, advertisers, PR agents, fund-raisers, lobbyists, recruiters) employ to persuade others. As a social psychologist, he focuses on ways to do so ethically—to “inform and thereby enhance others” rather than fool or exploit them—both because it’s right and because it’s a healthier way to build business over the long-term (more on that later). And, being an academic, it is centered on research and scientifically based evidence, even if he uses personal anecdotes to support those findings and make them more relatable. (The rise in popularity in the social and behavioral sciences that Influence helped spawn has also produced a wealth of new research and science beyond his own for Cialdini to pull from in the new book. That is evident in the 159 pages of references and noted at the end of the book.)

Cialdini spent three years as a fly on the wall of commercial training programs studying people whose job it is to influence others. One of the first things he found was that their training tends to focus on what is unique about their fields rather than what is the same across them, and the tools and skills needed to be an effective influencer. It’s so common to focus on the details of difference, in fact, that there is common joke about it among salespeople:

Client: Do you have experience marketing new food products?

Sales rep: We have quite a lot of experience there.

Client: Does that include experience in selling frozen food?

Sales rep: Yes, it does.

Client: How about frozen vegetables?

Cialdini thinks this proverbial missing of the forest for the trees is a huge mistake, because while you may need to sell what is unique about your service, or what differentiates your product from others, the tools used to do so are universal.

[I]f trainees could indeed be shown what proved convincing across the widest set of influence situations, it would help them win the day in all manner of circumstances, novel and familiar. In they could be educated to understand and employ universal principles that undergird effective persuasion, the details of the change they were hoping to generate wouldn’t matter. They would do swimmingly whether their influence attempt involved wholesale or retail, whole life or term, whole leaf or chopped.

In fact, if you’re a great marketer, you should also be a great lobbyist; a great marketer should be able to easily transition into fundraising. What Cialdini did by broadening his study to encompass not just the trees of a specific industry, or even the forest of business itself, but widen the view to the whole psychological ecosystem persuasion exists in, is “discover what lies in parallel beneath all the truly superior professional approaches to influence.” He expected to find that the best performers simply spent more time crafting the details of their pitch. In fact, in some cases the pitch was determined by things out of their control—the product specifics, or the limitations of the offering at hand. But, as we all know, some people excel more than others, even with identical products and scripts.

What he found is not just what works, but more importantly, when it works best, and how to leverage those privileged moments. “The best persuaders,” he tells us, “become the best though pre-suasion—the process of arranging for recipients to be receptive to a message before they encounter it.” So for instance, an experiment by communication scientists found that simply asking people “Do you consider yourself a helpful person?” when first stopping them to ask if they’d fill out a survey boosted participation from 29 percent to 77.3 percent. And playing German music at a wine store increases the likelihood patrons will choose a German vintage, as does French music with French vintages, etc.

The basic idea of pre-suasion is that by guiding preliminary attention strategically, it’s possible for a communicator to move recipients into agreement with a message before they experience it.

One big difference between Influence and Pre-Suasion is that the former largely revealed how existing sales and marketing tactics worked and how to deflect them, whereas the new book uncovers and explains things most professionals don’t know and teaches the reader how to harness them.

As I mentioned earlier, Cialdini is not unaware of the ethical considerations of such social influence. In fact, he devotes a full chapter to the issue. The argument he used to make in presentations is that unethical behavior and shady sales and marketing techniques turns off customers and is bad for business in the long-term, and there is evidence to back that up. But there is also evidence that that argument wasn’t effective in restricting the deceptive use of social influence.

The argument he now makes is that a company that allows or even encourages such deceptive tactics rots itself out from the inside—that it creates an unethical work environment and culture of dishonesty that will spawn “a nasty set of internal consequences that are akin to tumors.”

Not only will they become malignant—growing, spreading, and eating progressively at the organization’s health and vigor—they will be difficult to trace …

Books employing social science are very popular these days, but so are books on workplace culture. Pre-Suasion reminds us that there is a connections between the two, that using insights from behavioral science and social psychology can yield huge dividends if used accordingly and ethically, but that if employed unethically and deceptively, could be akin to the “one ring that rules them all” that gives you what seems like unparalleled power in the short-term, but slowly and inevitably corrupts and sickens whoever wears it.

So, ironically perhaps, this book may have the effects that Influence intended—to lessen the chance that consumers are exploited by unscrupulous attempts to influence their decisions in ways that harm them—by turning the focus to how to properly use it, rather than how to avoid it. 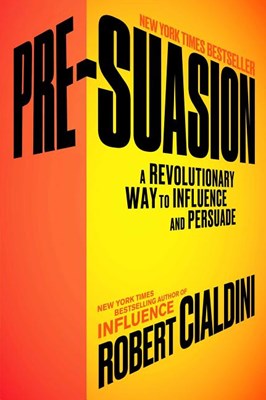 Pre-Suasion: A Revolutionary Way to Influence and Persuade