Questions Are the Answer: A Breakthrough Approach to Your Most Vexing Problems at Work and in Life

Hal Gregersen's new book is about the power of asking more questions in our organizations, in education, and in our lives. Questions Are the Answer: A Breakthrough Approach to Your Most Vexing Problems at Work and in Life by Hal Gregersen, Harper Business, 336 pages, Hardcover, November 2018, ISBN 9780062844767

“Question everything.” It was written on the wall in the men’s bathroom at a neighborhood watering hole here in Milwaukee—a blunt reminder to tipsy patrons not to take anything for granted, to think for oneself, to not accept conventional wisdom. It was a great piece of graffiti, only outdone when I came back about a month later to find someone had scrawled below it, “Why?”

Hal Gregersen’s new book, Questions Are the Answer, provides an answer to that bathroom wall wise-cracking inquiry. And, though it's very much a book about business, its lessons transcend it. As he puts it:

The truth that I have stumbled across—that the way to find better answers is to ask new questions—is not a truth that applies only to one part of life.

Generating those questions, and helping figure out how to reframe the ones you’ve been asking, is the task Gregersen has set himself. He bemoans how we tend to view innovative ideas as eureka moments, and creative breakthroughs as the result of genius, when they are usually anything but. When it comes to such ideas and moments, Gregersen writes:

The way we do “much more” is by coming up with more and better questions. This is especially imperative as we take on positions of leadership. The difficulty, as Gregersen sees it, is that you succeed in school and rise through the ranks of most organizations by providing the right answers, not by asking questions. We spend our years in school gaining the foundational knowledge of the field we wish to enter—knowledge that is necessary and continuously expanding. When we enter the professional world, we are given a heavy workload along with best practices and procedures to follow to tackle it. Questioning the system is not only uninvited, it is an obstacle to getting your work done.

From classrooms to offices, then, people spend their days in question deserts where creative inquiry is ignored and silenced in the interests of efficiency.

Somewhat related to that point, Gregersen has a very compelling theory about why larger firms are so often stodgy and incapable of innovation, lacking in the ability to come up with the kind of imaginative, catalytic questions that brought them into existence in the first place:

My theory is that, as organizations grow and gain market power, power-seeking people are attracted to them and gravitate to upper management roles.

Why does that matter? As I mentioned earlier, it is an imperative of leadership to surface the right questions. But it is also true that those in positions of leadership, those with more power, are generally those that get to ask the questions, while those underneath them will be forced to answer to them. That power dynamic can stifle transformative questions because, as Gregersen puts it, “The power hungry aren’t seekers of truth; they are seekers of advantage.”

Those attempting to gain or maintain power don’t use questions to ask permission, gain others’ perspectives, get to know others better, or seek their counsel. They use questions to put others in their places, to catch them out and make them look stupid, or to remind them that they are obliged to stop whatever they’re doing to respond.

There may be no such thing as a stupid question, but there are certainly toxic forms of questioning, those used to dominate others, to shut people down, and put them off of asking questions themselves. There are broader, society-wide implications of such power imbalances, as well. While the impulse to chalk things up to cultural differences is usually misguided, there are cultural differences that do influence how willing members of society are to question the status quo. Research by Dutch social psychologist Geert Hofstede and his team of researchers has found that, generally speaking:

Where inequality was not as great, “subordinates expect to be consulted,” whereas they expect, in places with high inequality, “to be told what to do.” The implications for raising questions that challenge the status quo are obvious.

There are many other dimensions to such cultural differences (Hofstede defines six), but the key knowledge to derive here is that culture can affect how questions surface, and to create space within your own culture—whether in the home, in the classroom, or in the office—to foster questions, and to become a deliberate facilitator of those that might not arise naturally even in the most accepting culture. As Gregersen notes, “To question anything fundamental is by definition to challenge,” so it’s not surprising that “personal reticence and powerful resistance to questioning” exists and is so widespread in society. He doesn’t have the hubris of many other books that we “can change the whole world into a questioning place,” but he does believe we “can carve out spaces in which we establish question-friendly conditions.” And that we must. But how?

Multiple books we’ve reviewed here over the years have exposed the flaws of brainstorming, but what if you turn to brainstorming sessions in which the aim is to develop new questions instead of new ideas and answers? In conditions that usually discourage questions, what happens if we invite them, and invite in outsiders with an unbiased perspective on the problem at hand? Gregersen stumbled across the approach in a brainstorming session in his classroom, and has refined it into a defined process over the last two decades. He calls them Question Bursts, and he has conducted them in large corporations and nonprofit organizations alike. He lays out the benefits of such a process, and exactly how to run it, even as he suggests you come up with your own way to create a culture that makes the fostering of questions an ongoing practice.

One key to that is, rather than being sheltered from challenging viewpoints, setting up psychologically safe spaces to explore them. Rather than seeking quiet group cohesiveness, we need to explore different perspectives and disagreement in a productive and permissive atmosphere that challenges groupthink. Among the many books he cites is Amy Edmondson’s Fearless Organization, to explain why, when it comes to organizational learning, noisy complainers are actually more valuable than those with quiet competence. That is because, in order for problems to be truly resolved, they need to be called out rather than covered over.

He also cites Chuck Klosterman’s But What If We're Wrong? and his good fight against a culture of certitude (in which we only take in information that reinforces what we already believe) to suggest we develop a healthy suspicion, even assumption, that we are wrong—not just on the surface layer of things, but at a heuristic level. We need to understand that our instincts and unconscious assumptions are very often incorrect in a very real and impactful way. Walt Bettinger, CEO of Charles Schwab, believes so strongly that success is determined more by uncovering what you are wrong about and course-correcting that he requires “brutally honest reports,” or BHRs, from everyone who works for him twice a month. (Bettinger also received what is perhaps the best final exam in business school that I’ve ever read of, in which the professor simply handed each student a blank piece of paper and asked them to write their name and answer two questions: “Who cleans this building?” and “What is her name?”)

The greatest quote in the book comes from the physicist Lawrence Krauss, director of Arizona State’s Origins Project. Speaking of what scientific discoveries may come as a result of the revolutionary discovery of the Higgs boson, he expressed a desire to be wrong:

“I have ideas and so do other theorists. But I always hope I’m wrong. I’ve often said the two greatest states to be in if you’re a scientist is either wrong or confused, and I’m often both. Mysteries are what drive us as human beings.”

“Not knowing,” reiterates Gregersen, “is more exciting than knowing, because it means there is much more to learn.” My favorite suggestion in the book is to “read more, read deeply.” I used to joke to friends that I wish I had lived during a time when there were only 100 books in the world. That way, I could finish them all and feel I had learned all there is to be known. But imagine how wrong I would have been! Imagine how wrong we still are! It is a satisfying thought. And the only way to answer it is with more, and better, questions. 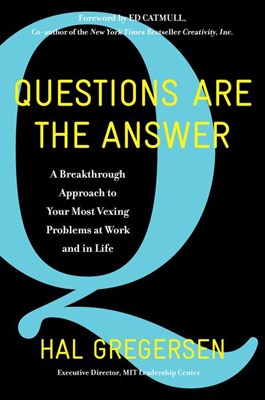 Questions Are the Answer: A Breakthrough Approach to Your Most Vexing Problems at Work and in Life