Steven Poole asks us to maintain a healthy skepticism, to suspend both belief and disbelief, and to keep thinking by rethinking. I’ve always found it curious that science fiction and fantasy are lumped together in the same genre. One imagines new worlds, looking inexorably toward the future of humankind. The other creates fanciful, mythical, and apocryphal versions of our past. One is devoted to the imagined technology of our future, the other the imagined magic of our past.

Steven Poole’s new book, Rethink, has nothing to do with that, but it brought to my mind the idea that the present moment in a perpetual push and pull between the future and the past, and of existential longing in both directions. And it reminded me that, rather than being diametrically opposed, magic and science exist along a continuum. For instance, alchemy is today derided as black magic, but some the greatest scientific minds, including Isaac Newton, dabbled in it. Poole tells the story of how, a decade ago, an American chemist named Lawrence Principe followed the alchemic instructions and created something that looked very much like a golden tree in a glass egg, perhaps what alchemists called the philosopher’s tree. So, it was basically a science experiment with a wonderfully fanciful name, and it wasn’t the only one science historians have found to be real:

According to a 2015 study in Chemical & Engineering News, for example, “Historians have now figured out that dragon’s blood refers to mercury sulfide, and ‘igniting the black dragon’ like means igniting finely powdered lead.” Alchemy was not anti-science superstition; it was the best science anyone could do at the time.

And there is this passage that seems to be an account of the near future:

[A] fleet of electric taxis—known as hummingbirds for their characteristic engine sound—worked the streets of London. The commissioner of Metropolitan Police approved of their potential to solve the cities burgeoning traffic problem … Similar taxis also touted for trade in Paris, Berlin, and New York … They were much more popular than gasoline-powered cars. They were less noisy and had no polluting exhaust.

The time period Poole is writing of is the end of the nineteenth century, when “by the turn of the century,” he tells us, “more than thirty thousand electric cars were registered in the United States” Well before Henry Ford’s Model T, and over 100 years before Elon Musk began work on his electric car, the electric car was king.

Many of the most cutting edge ideas today are, in fact, old ideas. For example, leeches are once again being used in medicine, to reduce pain and inflammation during skin grafts and other medical procedures, and to relieve symptoms of osteoporosis. Centuries old meditation practice and mindfulness training is being used by many to help them deal with the pressures and speed of the modern world. Psychotherapy and other talking therapies are now being shown to be just as important and effective in treating mental illness as the latest designer drugs. And even drugs themselves are often based on traditional herbal remedies; Tu Youyou found the basics of the recipe for her Nobel Prize winning, wormwood based antimalarial drug in a fourth century textbook.

In business education, Professor Jochen Runde, of Cambridge’s Judge Business School, has turned to Francis Bacon and the dawn of the scientific method for lessons, developing what he calls “a Baconian approach to management decision-making.” Bacon also posited the idea that meat could be preserved with ice, though sadly his experiments in doing so led to the pneumonia that would kill him in 1626. The first successful commercial attempt would come almost 300 years later, in 1924, when Clarence Birdseye started the General Seafoods Corporation after witnessing Inuit fisherman flash freezing the fish they caught in the depths of a Canadian winter.

But the book doesn't only look to the past. Poole also offers prognoses for the future, such as a universal income. The idea of a universal basic income has been recently brought to the fore in political and business circles, especially Silicon Valley business circles, as both blue and white collar jobs are being automated into nonexistence by increasingly intelligent machines. But the idea of a guaranteed income dates back to at least 1796, when Thomas Paine wrote in his pamphlet, Agrarian Justice, that poverty “is a thing created by that which is called civilized life,” and argued all members of civilized society should receive some capital endowment upon turning twenty-one, and a pension at fifty. Countering the argument that this would create a disincentive to work, he cites a five-year project done in Manitoba in the 1970s, which showed that only teenagers pursuing their education and new parents worked less when receiving guaranteed income, and argues that access to basic capital is actually a prerequisite to joining the labor force, rather than the reason we do.

Poole goes on to question why any notion of this kind of economic planning is considered utopian, while the belief that unfettered free markets will create unplanned perfection is not. He argues that it is, in fact, utopianism, “but utopianism based on sheer faith rather than forethought or planning.” And yet, he seems rather unfazed that there is not much common ground between these two visions of utopia, and that it may not be entirely clear which one is right. In fact, most of the book is an argument that ideas are never inherently right or wrong, but rather right or wrong for their time, an argument for the interchange of ideas and the hopeful belief that good ideas time will come.

If we can make better electric cars and better antimalarial drugs, surely it is not beyond our ability to make better political systems. All it takes is a little rethink.

He also explores some really controversial and potentially dangerous ideas, like eugenics and designer babies, cautioning us that an idea once used for evil ends is not necessarily evil in and of itself. He uses the example of nuclear weapons, which threaten our very existence on this Earth, but could one day protect it by intercepting and asteroid on a collision course with Earth.

At the heart of all his writing is the value of deferred judgment, whether applied to intelligence gathering and spycraft, value investing, or contemplating the existence of the soul. Speaking of Warren Buffet’s patience in investing and applying it to ideas, he suggests:

Perhaps it’s also worth avoiding knee-jerk reactions when considering whether to buy or sell stock in an idea. In our modern liberal societies it is considered wrong to be too “judgmental” about people and their lifestyles. But many people are happy to be judgmental about ideas. It is common to dismiss ideas quickly as stupid or vicious, as obviously wrong or trivial. But … that dampens the imagination.

It is, of course, common to dismiss an idea as old, as having been tried before, or as outlandish and impossible to implement. Poole’s basic argument is one in favor of epoché—a skeptical suspension of both belief and disbelief. He suggests we become less convinced of what we know, less confident in our own rightness and the status quo, of the wrongness of whatever the other side may be. You’ll find that common sense is often nonsensical, and what seems like nonsense in one era is what powers the next.

Fantasy and science fiction really do go hand in hand. Whether the idea is a fire-breathing dragons or fire-breathing rocket, we should maintain a healthy intellectual distance so as to not get burnt, but believe in it enough that we can latch on for a ride when it is going the right direction. 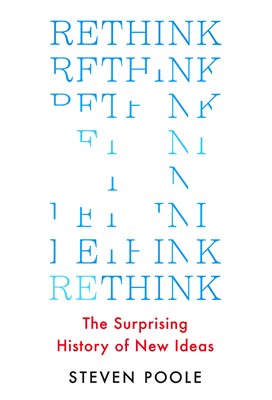