Bethany McLean's new book exposes the faulty foundation of America's shale revolution, and in so doing offers a clearer base of facts for the discussion on how to proceed. Saudi America: The Truth About Fracking and How It's Changing the World by Bethany McLean, Columbia Global Reports, 138 pages, Paperback, September 2018, ISBN 9780999745441

The white sands of Wisconsin are being dug up, mixed with water, polymers, and surfactants—things like hydrochloric acid, guar gum, biocides, 2-butoxyethanol, and radioactive tracer isotopes—and injected deep into the shale rock formations of places like Texas and North Dakota. It seems like an odd thing to do, but there is reason to it.

The shale revolution has been hailed not only as an American economic success story, but as the path to national energy independence and greater geopolitical security. The phrase “Saudi America,” which Bethany McLean employs as the title of her new book, was coined by former director of Italian energy firm Eni, who has predicted that the oil and gas boom in production in this country means that “the U.S. could one day rival Saudi Arabia’s fabled oil production.” It is a boom that has changed the American landscape—both literally and economically.

Before long, the boom would begin to reshape the U.S. economy. Between 2011 and 2014, the Wisconsin Department of Natural Resources handed out more than a hundred permits for sand mines. Frackers had discovered that great quantities of “Wisconsin white” seemed to work best as proppant. From 2009 to 2012, the amount of sand shipped by railroads more than doubled, mainly due to frac sand, according to the American Association of Railroads. Rail giant Union Pacific even started a program called “Sand 2 Shale” to expedite the shipments of sand.

It is this revolution that renowned journalist McLean—author of classics like The Smartest Guys in the Room and All the Devils Were Here—has turned her attention to in Saudi America. What she finds is that it wasn’t so much the combination of hydraulic fracturing and horizontal drilling that sparked the revolution—as necessary as those technological developments were—but the financial crisis of 2008, and the historically (long-lasting) low interest rates that followed.

When she dug into that story, she began to doubt the excited exaltations of politicians and the press.

The biggest reason to doubt the most breathless predictions about America’s future as an oil and gas colossus has more to do with Wall Street than with geopolitics or geology. The fracking of oil, in particular, rests on a financial foundation that is far less secure than most people realize.

The most vital ingredient in fracking isn’t chemicals, but capital, with companies relying on Wall Street’s willingness to fund them. If it weren’t for historically low interest rates, it’s not clear there would even have been a fracking boom.

As one energy investor said: “If companies were forced to live within the cash flow they produce, U.S. oil would not be a factor in the rest of the world, and would have grown at a quarter to half the rate it has.” McLean uses the complicated legacy of Aubrey McClendon as a personification of the revolution. Forbes once listed him as America’s 134th richest person, worth over $3 billion, but his fortune was leveraged with so much debt that when he died in a fiery car crash, he was essentially broke—evidenced when Wall Street vulture funds swept in to purchase the debt he had accumulated “for less than 50 cents on the dollar.”

It was early 2016 when oil tumbled from a high of $100 a barrel to $26. McClendon’s death, Mclean notes, acted “as the punctuation marking the end of an era.” But, in an industry notorious for its boom and bust cycle, a whole lot of people got incredibly rich off the initial boom in the aftermath of the recession, and another boom wasn’t far behind.

While the media focused its gaze on the high priests of technology like Amazon’s Jeff Bezos and Facebook’s Mark Zuckerberg, unknown tycoons quietly raked in millions.

But as investment manager Jim Chanos says, “The industry has a very bad history of money going into it and never coming out.” David Einhorn, founder and president of Greenlight Capital, looking at the financial statements of the sixteen largest publicly traded frackers, confirmed that sentiment with actual numbers:

Einhorn found that from 2006 to 2014, the fracking firms had spent $80 billion more than they had received from selling oil and gas. Even when oil was at $100 a barrel, none of them generated excess cash flow—in fact, in 2014, when oil was at $100 for part of the year, the group burned through $20 billion.

Oil, as we all know, would not remain at $100 a barrel. Maya Rao’s Great American Outpost: Dreamers, Mavericks, and the Making of an Oil Frontier is a great social history of the bust as it rippled through North Dakota and jobs disappeared. On a global level, McLean reports, the oil and gas industry “shed almost half a million jobs during the bust.”

That spring, the Kansas City Federal Reserve concluded that “current prices are too low for much long-term economic viability of shale oil production.”

The bust was largely the result of a decision made by OPEC, in November of 2014, not to cut oil production as price of oil began to drop (at that time to $80 a barrel). It was a decision that arguably hurt their own interests, as it hurt the price of oil from which OPEC members’ government revenues largely flow, but it was a death knell for the U.S. shale industry, which spent “as much as five times” to extract oil in the capital-intensive process of fracking as most other oil producing nations. But 2016 would be a seminal year in the fracking industry, whose boom and bust pendulum swung forcefully back to boom after a deal was struck between Saudi Arabia and Russia to finally cut production. Investor Simon Lack wrote in Forbes that this series of decisions on OPEC’s part “turned out to be a colossal miscalculation, which led to the spectacular triumph of American free-market capitalism over 40% of the world’s oil output,” stating, “The Shale Revolution reflects America’s dynamic capitalist economy at its very best.” A senior fellow at the Hudson Institute wrote, “Above all, it [the production cuts] means that America has truly reemerged as the world’s energy superpower.”

But, as I read Bethany McLean’s succinct history of events, I came away wondering if you can really call yourself a superpower if your economic success is based on others’ decisions and an industry that—despite its prodigious production and the massive personal fortunes it has created (fortunes which have gone to purchase the Buffalo Bills, the Texas Rangers, and the Seattle Supersonics, which Aubrey McClendon relocated to Oklahoma City)—has still largely failed to turn a profit:

The private equity titans have made fortunes—but not necessarily because the companies they have funded have produced profits. Some of the returns that the private equity firms have generated have come from selling one company to another … or in taking a company they’ve funded public. For a long time, the value the public market was willing to afford a fracker was based not on a multiple of profits, which is a standard way of evaluating a company, but rather as a multiple of the acreage a company owns. It was a bit like the old dotcom days, when internet companies were valued on the number of eyeballs. The attitude is invest-and-flip, not buy-and-hold.

“I view it as a greater fool business model,” one private equity executive told me. “But it’s one that has worked for a long time.”

There is one company, EOG Resources (a company that, ironically—considering McLean’s documentation of its collapse in The Smartest Guys in the Room—was spun out of Enron) that comes across as financially sound, and is worth more today than Enron was at its peak as a result. Its CEO, Bill Thomas, sees the industry, unsurprisingly, as “an enormous advantage for the U.S.” And, in at least one way, it has been: the glut of cheap domestic gas and oil has been a boon for U.S. manufacturing, especially the refining and chemical industries. It is such an advantage, McLean explains, that “German industrial trade group BDI even warned that America’s cheap natural gas could put European firms at a serious economic disadvantage.” McLean continues:

The impact on U.S. manufacturing can be see in plans such as ExxonMobil and Saudi Basic Industries (a major Saudi Arabian producer of petrochemicals) to invest $10 billion to create a massive plastics and petrochemical plant in Corpus Christi. Or Big River Steel’s $1 billion steel mill in Osceola, Arkansas. Or Total’s $2 billion ethane cracker plant in Potter Township, Pennsylvania, on the edge of the Marcellus. … Or another Shell petrochemical complex that has sprung up along the Ohio River in Beaver County, Pennsylvania. Since 2010, over three hundred chemical industry projects worth worth over $181 billion have been announced in the U.S., according to the American Chemical Council, a trade group representing chemical companies.

Yet, while investments in fossil fuels like oil and gas are booming in the U.S., and support for even coal shoots up under the Trump administration, other countries are investing in less finite (see, renewable) energy resources.

According to a Bloomberg report entitled Global Trends in Renewable Energy, China is now the leading destination for renewable energy investment, accounting for 45 percent of the global total in 2017. In contrast, investment in renewable energy in the U.S., which was already well below China, declined last year.

And as “Saudi America” doubles down on dirty energy, Saudi Arabia itself is trying to plan for the future:

As America celebrates its supposed crushing of OPEC, the Middle East is planning for the future. Saudi Arabia, for instance, is planning not just to build Saudi crown prince [Mohammad bin Salman’s] new city powered by renewable energy, but also to spend $50 billion on a massive push toward solar. … Even Saudi Arabia is trying to move its economy away from fossil fuels in order to generate as much money as they can from exporting oil—until the day it’s all over.

McLean exposes the faulty foundation not only of our supposed energy independence, but of the very desire for it. The idea that we’d be more secure if we did not rely on volatile regions of the Earth for our energy supply is alluring, but what happens to global security when the U.S. exits those markets? What if, rather than greater national security, it actually undermines it? As a Brookings report rather snarkily stated, “Oil remains the most efficient mechanism for translating economic [risk] into geopolitical risk.”

Charlie Munger, famed investment partner of Warren Buffett, believes there is an even better reason to continue paying more for foreign oil, namely to preserve our own reserves for use in the “pesticides, nitrogenous fertilizer and other agricultural products that are made through use of hydrocarbons,” and which current agricultural practices rely upon.

The sloganeering of “drill, baby, drill,” and the false, geopolitically-fraught hope of energy independence it implies, ignores these basic business, economic, and existential human realities. In exposing them, McLean offers hope for a more reasonable discussion, a more sustainable and profitable industry, and, perhaps, a more integrated energy policy. 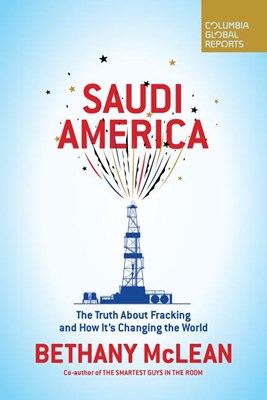