Scrappy: A Little Book about Choosing to Play Big

In her new book, Terri Sjodin helps us stop making excuses and start getting scrappy in pursuit of our goals.

We all make excuses. And most people will accept them. There are an endless number of reasons not to challenge ourselves or do something unexpected, and we’ll call on all those reasons to stay comfortable and safe. After all we’ve work hard just to become comfortable. The irony is that to become truly successful, to take that next step, we must push past that comfort and constantly challenge ourselves anew. It is only in the discomfort of trying something new that we make real progress. The next accomplishment is always preceded by a bit of awkwardness. Playing big is scary.

Deciding to go for it anyway presents a challenge, but as Terri Sjodin reminds us in her new book, Scrappy: A Little Book about Choosing to Play Big, “nothing will ever happen if you don’t step into the challenge.” And, once you do make that decision, the focus changes from the challenge itself to finding solutions. And that’s when things begin to get interesting, because:

The brain has no incentive to come up with new ideas if it doesn’t have to. As long as your brain knows it has another out, it will always be content with keeping you alive by coming up with the same ideas that it used before.

Once you commit to a challenge, the ideas will start flowing. It doesn’t require a magical formula or divine inspiration; it requires a simple decision to do it. Quoting Tom Hanks’ portrayal of Commander Jim Lovell in Apollo 13, Sjodin reminds us that one of the largest leaps in humankind’s history was the result of a decision to go for it:

Hanks, as Lovell, is sitting beside his wife in their backyard, staring at the night sky shortly after Apollo 11 has safely landed on the moon. He looks over at her and says, “We now live in a world where man has walked on the moon. It’s not a miracle. We just decided to go.”

Landing Apollo 11 was scrappiness on a national scale. But scrappiness does require more than just making a decision. It requires research, strategy, and execution, and thankfully, the majority of Sjodin's book is focused on exactly those things. You’ll learn how to lay the groundwork, understand what questions you need to ask and figure out how to answer them, and get your butt in gear. Think of her as your scrappiness trainer:

A boxer may have a scrappy attitude, but she had better put her time in at the gym with a solid coach and learn about her opponent before stepping into the ring …

In the second part of the book, on strategy and “Cultivating Scrappy Ideas,” Sjodin provides the reader with literal lists of ideas to get traction with people and tells stories that provide examples of individuals implementing them in ingenious and scrappy ways. And scrappiness doesn't require your dream to be big (like landing someone on the moon), your idea doesn’t have to change the world, and the methods to bring it about don’t have to be excruciating. One example is of a young woman who just really wanted to work at Airbnb, and designed a creative online résumé to get their attention and land an interview. One of the creative tools touted is simply taking a shower, and using your time in it deliberately and thoughtfully, to turn it into a “personal idea booth.”

To make sure you’ve truly thought through your idea and strategy before entering the execution phase, she begins the third part of the book, on execution, with stories of “good ideas gone bad.” She shares stories of mistakes others have made when they were a little overzealous in their attempts to get scrappy so you don’t make them yourself. The trick is to be aggressive and proactive, unexpected and perhaps even a little unusual, while still being professional.

In addition to detailing strategies for personal scrappiness, you’ll also learn how to develop and scale a scrappy culture within your organization. You’ll be reminded to stay flexible, to embrace the unexpected and know that not everything is in your control, but to be prepared for success as well as failure. It may be better to be lucky than smart, but it’s critical to be prepared.

One of the best moments in life is looking back and realizing how much better things turned out because your plan didn’t go exactly as planned.

And that direct applicability and actionable advice is the biggest strength of this book. A book on the benefits of being scrappy could easily turn into a empty cheerleading self-help effort on developing the right attitude. And attitide is important, but Sjodin puts it in it’s proper place, a brief forty pages (in a 256 page book) in the first part of the book after the introduction. The rest of the book is dedicated to developing strategy and taking action.

The only thing riskier than taking action is doing nothing. The most unsafe thing to do in business is trying to play it safe. Dispense with the excuses. Try something new and unexpected. Get weird. Stand out. Get Scrappy. Terri Sjodin will be your guide. 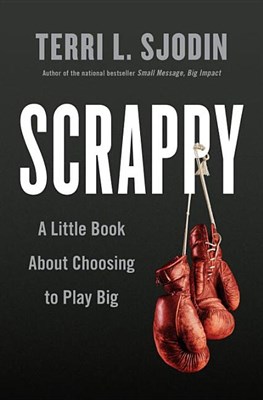 Scrappy: A Little Book about Choosing to Play Big