Bill Taylor, founder of Fast Company, reminds us that creativity exists outside of Silicon Valley, and is available to all of us. 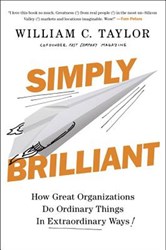 I first learned of Bill Taylor when we brought him here to Milwaukee to speak about his first book, Mavericks at Work. He brought the leader of KI, a contract furniture company from Green Bay, along with him to talk about how they turned their company around by turning over its ownership to its employees. I had worked in a small consumer co-op before coming to work here at 800-CEO-READ, and while KI is not a co-op itself, seeing the world of business books and the idea of distributed ownership collide made a huge impression on me. It wasn’t and “either-or” proposition between co-operation and corporation; it could be a “both-and…”

That is a lesson that he reiterates and expands upon in his new book, Simply Brilliant, which makes the case that:

In a time of wrenching disruptions and exhilarating advances, of unrelenting turmoil and unlimited promise, the future is open to everybody. The thrill of breakthrough creativity for breakaway performance doesn’t belong just to youngest companies with the most cutting-edge technology or the most radical business strategies. It can be summoned in all sorts of industries and all walks of life, if leaders can reimagine what’s possible in their fields.

In fact, I took the “either-or” versus “both-and” language directly from Taylor’s analysis of Fastenal of Winona, Minnesota, which Bloomberg Businessweek found was the single-best performing stock in the 25 years after the Black Monday crash of 1987. Founded in 1967 as a store that sold nuts and bolts, it is now the largest distributor of industrial supplies in the country. They have maintained their success by distributing decision-making, remaining agile and responsive to individual customer’s needs. In fact, if there is a part that is unavailable or doesn’t exist anymore, they will make it for you.

Don’t use your company’s age or industry as an excuse for mediocrity. There is no such thing as an average or old-fashioned business, just average and old-fashioned ways of doing business.

Fastenal, Taylor tells us, actually does exhibit “a proudly old-fashioned culture, a throwback sensibility of sorts,” but it is not conservative or hierarchical. Rather, it embraces an “agile, flexible, bottom-up approach to building the culture.”

Most of the fifteen organizations Taylor draws on are anything but run-of-the-mill examples for business books. Most of them are companies I’ve never even heard of before, like Metro Bank in England, or SOL, a cleaning services company in Finland that has spread throughout northern Europe and into adjacent fields like security services, staffing information desks, and stocking shelves by empowering their frontline employees to manage themselves and their relationships with clients, which gives them the ability to say yes to new opportunities when they arise in the field. There’s even a parking garage in Miami Beach that “has become an in-demand venue not just for motorists but for charity functions, wine tastings, and celebrity gatherings”—even weddings. Pal’s Sudden Service fast food chain is so revered that it has created the Pal’s Business Excellence Institute that holds two-day classes at least once a month, attracts attendees from a diverse array of industries (the session Taylor attended included “visitors from hospitality companies, manufacturers, the construction business, a ballet troupe, [and] a public-school system”), and always sells out weeks in advance. I’d never heard of them.

And the examples also aren’t limited to for-profit business. The Southcentral Foundation took over a badly mismanaged healthcare system from the Indian Health Service in Anchorage, Alaska. It now has sixty-five thousand customer-owners in the system, and people have come from as far away Scotland, Singapore, and New Zealand to study their success. It even has been the topic of a Harvard Medical School case study. And its success stems from the sense of ownership the community has over the health, and its literal ownership of their healthcare system. As Katherine Gottlieb, who “started out as a receptionist and now serves as the system’s vice president of behavioral sciences,” proclaimed to the foundation’s customers after a New York Times editorial featured the foundation:

Taylor walks the New Haven Green and grounds around Yale University, not with professors of business, but with members of the 100-Day Challenge—to find, identify, and document the chronically homeless there in an effort to help them find permanent housing. It was a part of the 100,000 homes campaign, begun by Rosanne Haggerty. Haggerty, a veteran in the field, did something unusual when she hired someone with no social services experience to help run the campaign. Becky Margiotta, a former military officer, came up with the idea of photographing those they were trying to help. It was something most social service veterans thought would be demeaning to the homeless, but that Margiotta found gave a face to the homeless and helped keep better records of them so they could better serve them. The campaign, and its success, helped shift the focus from housing infrastructure, which had been the main focus of advocates for decades, to the population that needed it, which helps Taylor illustrate a key point:

Expertise is powerful—until it gets in the way of innovation.

But the key message of the book is that even those in established industries, and with expertise, can and should be creative in business. And one of the companies I did know of, but now know much more about thanks to Taylor—Megabus—proves that point as well as any example in the book. After explaining how it has revolutionized one of the least glamorous and most dreaded forms of transportation—bus travel—he drops the truly surprising thing about it: it is not the work of a disruptive outsider challenging the old order, but of a “progressive business unit of one of the biggest transportation conglomerates in the world, the new face of a multi-billion dollar giant that is about as established as it gets”—Stagecoach Group.

At the end of book, in a chapter whose title he took from an admonition Bruce Springsteen used to offer the crowd at the end of his shows, “Nobody Wins Unless Everyone Wins,” he returns to the story of KI that inspired me so much when we brought him to Milwaukee. Speaking of the results of shifting ownership from three shareholders in what was a struggling company to every employee, he tells us that, now:

Everyone at the company has a financial and psychological stake in how it performs and the value it creates. Plenty of leaders say they want their colleagues to “think like owners” when they make decisions about cost, quality, service, and product development. What [CEO Richard] Resch understood, and what his company’s performance demonstrates, is that the most direct way to promote an ownership mind-set is to turn them into actual owners.

An even older, and perhaps greater example of that is Lincoln Electric:

Lincoln Electric is one of America’s great manufacturers, a globally successful producer of welding equipment and cutting machinery founded back in 1895. Lincoln Electric doesn’t make many headlines, but it has made history since 1958 by vowing to never lay off a single employee and, since 1934, by sharing a big chunk of its profits with its Cleveland-area employees. In a decidedly unglamorous field, and in the face of recessions, financial collapses, and rapid technology shifts, Lincoln Electric has achieved something unrivaled by recognizing that people are at their most productive when they get a piece of the action and a seat at the table.

Taylor proves through these stories that you don’t have to be at the cutting edge of technology to be at the cutting edge of business. Fastenal, after all, is a supplier of literal cutting edges and other tools to traditional manufacturers. If you want to be more creative and successful in business, Bill Taylor's new book offers a myriad of great, against-the-grain, counterintuitive, and surprising ideas. But they are also some of the most humane, and impactful, and inspiring ideas I've come across in a while, and they have a track record of working in new and old companies alike. The book, true to its name, is Simply Brilliant.