Douglas Rushkoff diagnoses the structural problems of the digital age, and points the way toward human liberation.

I have a small parenting problem on my hands. My daughter Ida, who turns six next Saturday, loves books. That makes my heart sing. The problem is that she is not at all interested in learning to read. I know she will eventually, but it’s not taking at the moment. She is a strong-willed, strong-minded (some would say stubborn) little girl, a personality trait my wife and I are thankful her Montessori teacher of the past three years has helped us learn to support rather than suppress. But it’s really frustrating, for her, her teacher, and us as parents, when she refuses to do her lessons at school—and it breaks my heart when she tells me she didn’t like her day at school because she doesn’t like reading.

Of course, as Douglas Rushkoff reminds us in his new book Team Human, reading and writing—like any technology—can be used to coerce as easily as it can to educate.

For the first five hundred years after its invention in Mesopotamia, writing was used exclusively to help kings and priests keep track of grain and the labor they controlled. Whenever writing appeared, it was accompanied by war and slavery. For all the benefits of the written word, it was also responsible for replacing an embodied, experiential culture with an abstract, administrative one.

That does not mean we shouldn’t teach our children to read, any more than it means we should not teach them to talk. “Before language,” Rushkoff reminds us, “there was no such thing as a lie.” It simply means we need to instill in them values with which to interpret, exist, and involve themselves in the world. And in a time of tremendous change and upheaval, that seems even more important. As Rushkoff writes:

Autonomous technologies, runaway markets, and weaponized media seem to have overturned civil society, paralyzing our ability to think constructively, connect meaningfully, or act purposefully. It feels as if civilization itself were on the brink, and that we lack the collective willpower and coordination necessary to address issues of vital importance to the very survival of our species.

It doesn’t have to be this way.

The problem isn’t technology, markets, or media any more than there is a problem with spoken language or the written word. It is how they are currently being used. The Digital Revolution and economy are now in a state akin to the Industrial Revolution before workers fought for and won a right to say how and when they would labor in it, a state similar to the Printing Revolution before greater freedom of the press. That is, it is being used to isolate and control us rather than improve, educate, and uplift human beings. As Rushkoff says, “Our most advanced technologies are not enhancing connectivity, but thwarting it.” It is, in short, disconnecting and dividing us. The division of labor that made human civilization possible only works if we have a shared space to come together and exchange freely. And that same division of labor may not be the most important development in the first place:

The more spectacular achievement was not the division of labor but the development of group sharing. This distinguished true humans from the other hominids: we waited to eat until we got the bounty back home. Humans are defined not by our superior hunting ability so much as by our capacity to communicate, trust, and share.

The problem with how to communicate, trust, and share online is that it is memetic—appealing to our impulses rather than our intellect. In the social media environment, for example:

“Look at what this person said!” is reason enough to spread it. In the contentious social media surrounding elections, the most racist and sexist memes are reposted less by their advocates than by their outraged opponents.

This is the very definition of trolling. It is the outrage that often gives oxygen to the flames of hate. And Rushkoff warns that, even when memes are created by those trying raise awareness, they are ineffective and antihuman:

“We shape our technologies at the moment of conception,” but Rushkoff reminds us, “from that point forward they shape us.” That’s nothing new. Algorithms and AI have an additional dimension, Rushkoff says, in that they also shape themselves—sometimes in ways that we’re unaware of and may do us harm. He uses the example of how social media algorithms notice that we tend to engage with photos of our ex-lovers having fun, and because they’re trained to keep us engaged, they begin showing us more and more of them. It doesn’t matter that they make us depressed, a psychological and lived depth they couldn’t possibly (yet?) understand; all that matters is that they keep our attention so that they can mine data and sell the space around those pictures to the highest bidder. It is the logic of extractive economics.

Our daughter asked us last night at dinner what job she’d be able to get if she doesn’t learn to read. I asked her again what she’d like to be when she grows up, and she replied, as she always does, “A scientist and an artist.” So her mother and I explained to her why she would need to learn to read in order to do either one of those. But, in a world that book after book tells me is becoming increasingly jobless, I quietly worry if there will be any jobs left for her to do at all.

Back in the era of outsourcing … workers would cry foul when they were asked to train the low-wage foreign workers who would shortly replace them. Today, workers are hardly aware of the way digital surveillance technologies are used to teach their jobs to algorithms.

This is what all the hoopla about “machine learning” is really about.

Under this system “the humans’ only real job is to make themselves obsolete.” Will my children be obsolete to the economy by the time they’re old enough to work in it? And what if, Rushkoff asks, our ability to maintain our humanity and care for ourselves and our family were untethered to having a job. He reminds us that the Department of Agriculture regularly burns crops, and that banks tear down houses in foreclosure, all to keep prices artificially high.

But we can’t simply give the extra food to the hungry or the surplus houses to the homeless. Why? Because they don’t have jobs! We punish them for not contributing, even though we don’t actually need more contribution.

Our robot replacements are also built with “rare earth metals and blood minerals; they use massive amounts of energy; and when they grow obsolete their components are buried in the ground as toxic waste.” Meanwhile, my wife and I have two kids who we will do our best to pass our knowledge and values down to, and our bodies will decompose very nicely, or be reduced to ashes very nicely when scientists are done studying them, thank you very much.

And of course, learning to read and gaining skills, knowledge, and perspective shouldn’t be tied to the concern of what kind a job we’ll be able to get when our formal education stops.  We should never stop learning.

Our calculation speeds can’t compete with with those of a supercomputer, and we will never lift as much as a crane. But humans are worth more than our utility. Enhancing one job-friendly metric with technological intervention or replacement just leaves other, likely more important values behind. The most important of those is consciousness itself.

The conversation we had at dinner was the continuation of one I had with the kids as I drove them to school. I’ve been hearing from both kids’ teachers that they haven’t been doing their lessons at school, and was trying to explain to them the importance of learning. I told them that learning is the best way they can honor our ancestors, that the knowledge that they’re gathering has been hard won and built up over all of human existence, and that passing it on is the reason we go to school, the reason we go to work, perhaps even the reason we are here at all. That’s pretty heavy for a four and five year old, I guess, but I’ve been reading Rushkoff, who writes in Team Human that:

Through language and instruction, humans create a knowledge base that compresses or binds many centuries of accumulated wisdom into the learning span of a single generation.

I’m taking it out of its context, but Rushkoff at one point posits that “we’ve been trained to fear and reject the possibility that reality is a participatory activity, open to our intervention.” But, of course, reality is participatory, and changes because of us. However small a dent we put in it, the universe is different because of our existence in it. Humanity, our community, our family is different because of our existence in it. The world is uncertain, and to be alive is to live in that ambiguity and uncertainty. But we can all intervene in our own reality. We can connect to those around us, and make a change at a local level about how we want to live together and how to govern ourselves.

What we need now, in Rushkoff’s view, is not a revolution in which we build a digital version of life with the same inequalities and injustice and institutions we have now “A superficial changing of the guard,” but a renaissance—which is “a retrieval of the old.” The ideas and values we need already exist. We simply need to reclaim them, and reinvigorate them in a new context. Digital technology isn’t the problem any more than the invention of agriculture, the automobile, or the telephone was. It’s the way the vested interests that control those technologies try to use them to control us. It’s the way in which they have “compromised our relationships, our values, and our thinking.” As Rushkoff writes:

It’s not that smart phones, stock markets, or cities are inherently bad, but that they are currently designed to extract from instead of exalt our humanity—subjugate rather than liberate us. The fundamental problem is not technology, but “humanity’s widespread refusal to value one another and the world we share.” There are other values than those of extractive capitalism and rampant individualism, and we can choose to reclaim and act on them. “Evolution may have more to do with rising above one’s peers,” asserts Rushkoff, “than learning to get along with more of them”

Our values—ideals such as love, connection, justice, distributed prosperity—are not abstract. We have simply lost our capacity to relate to them.

I think most of us feel like we’re doing something wrong, that there is something different about us that we need to hide, something unnamed that we’re ashamed of. But, “Once we dispense with shame,” Rushkoff writes, “we are liberated to experience the full, sacred, unlikely wackiness of being human.” We are liberated to more fully connect to one another. We are, simply, liberated.

We are not perfect, by any means. But we are not alone. We are Team Human.

There is so much more to this book about the history of humanity and what it means to be alive that I can’t even begin to touch on in the space I have here. But, after reading Rushkoff, I know what team I’m on. 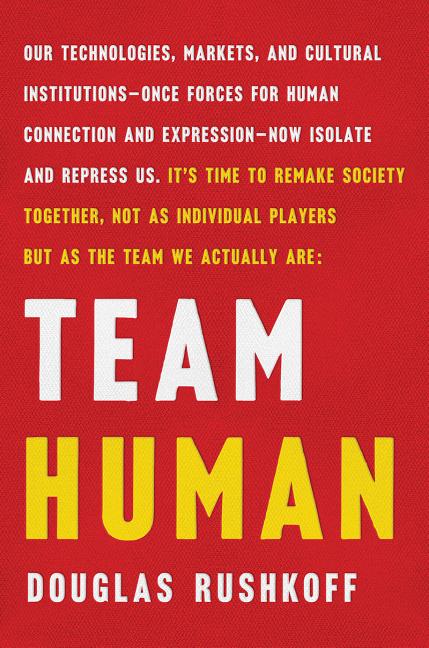