Steven Clifford chronicles the inexorable rise of CEO pay, how it harms companies, curbs economic growth, and undermines democracy, and how we can fix it. There is broad consensus that CEO pay in America long ago went beyond being too exorbitant and entered the realm of the absurd. Yet, very little has been done to curb the trend, and very few viable ideas have even been floated—until now.

I tend to open books written by CEOs with a certain amount of skepticism, for a reason similar to why the Israeli short story writer Edger Keret said he avoids autobiographies and memoirs—because, as he put it, “I tend to mistrust people who are telling a story they have such a great stake in.” But Steven Clifford’s book is not about his fourteen years as a CEO, and when it briefly is, he doesn’t deign to offer others advice on how to do the job:

But, here’s the thing: even if he were in the top 20 percent, there would be no way he’d be worth the preposterous pay packages that top-earning CEOs receive today—because no CEO is. There is not any evidence that those paid the most are even in the top 20 percent, and a good deal of evidence to the contrary. There’s simply no good reason any company should offer such excessive compensation to CEOs, other than inertia. Explaining that inertia, dissecting any and all arguments for why it's rational, and examining how we can end it (and why we must) is the subject of The CEO Pay Machine.

Clifford’s ideas for how to stop the pay machine from escalating, and bringing CEO pay back to earth are relatively straightforward. How we got here is not. In addition to having been a CEO for fourteen years himself, he has been a director of thirteen companies, and has chaired multiple compensation committees. He spends a good chunk of the book explaining how that process typically works, exposing the farce and foolishness of it, while also explaining the history of how it came to be. You’ll learn all about how such committees select peer groups, set performance benchmarks, bonuses and bonus bogeys, stock options, and how it all became such a prevalent part and parcel of today’s CEO pay packages. That’s an education in its own right.

Then, you’ll learn how ever-rising CEO compensation harms the companies that offer it, has curbed economic growth, and even undermines our very democracy.

There are many reasons it harms company performance right off the bat, the main one being that a CEO making such large amounts leads to a lack of internal equity within a company, which increases levels of distrust and disengagement among staff, and negatively affects employee satisfaction, morale, and productivity. The bonuses CEOs receive are also usually structured in a way that rewards short-term performance over long-term sustainability, innovation, and growth. And that is not even cracking what is often the largest piece of CEO compensation—how stock options are awarded and exercised, and what role that has played in the explosion of stock buybacks in corporate America, to the detriment of investment in research and development, again putting short-term profits ahead of the engine that powers long-term growth for companies and the economy as a whole.

None of this is a natural phenomenon. It is relatively recent, and it’s impact on the economy has been great:

From 1949 to 1979, while the ratio of CEO-to-average-worker pay was relatively constant, the US economy grew 2.56 percent annually. When this ratio surged from 1981 to 2014, economic growth dropped to 1.71 percent a year [measure in per capita US real gross domestic product]. The difference may sound small, but over half a century, the higher growth rate results in an economy that is 50 percent larger. That’s a big difference.

Clifford is careful to point out that correlation is not causation, but suggests that these numbers certainly prove “that overpaying CEOs has not done much to help.” With all that being true, the question Clifford thinks should be driving the discussion today is:

Given where America is today, will greater or lesser income inequality spur economic growth?

Clifford cites OECD [Organization for Economic Co-operation and Development] research that found that increased income inequality in twenty-one developed countries has cost them 8.5 percent growth in GDP over the past twenty-five years. Crunching the numbers, he comes to the following conclusion:

Since the United Stated suffered a greater increase in inequality than the group [studied by the OECD], assume increasing inequality reduced US GDP by 10 percent over twenty-five years. Had that additional growth been distributed equally, the median household income today would be $64,928.

Median household income was, in 2014, $53, 657. But it’s not that the economy hasn’t grown at all. It’s just that “CEO pay increased tenfold since 1980 and the average household got stiffed.” That produces growth implications of its own, as average earners tend to spend that money in ways that enhance the economy, whereas the wealthy are more likely to sock it away—which brings us back to the question of "will greater or lesser income inequality spur economic growth?" So Clifford looks at the track record of those that tip the scales of income inequality, and where the gains have gone. A large part of the book tracks the pay package and performance of the four highest paid CEOs from 2011 to 2014: Stephen Hemsley of UnitedHealth Group, John Hammergren of McKesson, Charik Souki of Cheniere Energy, and David Zaslav of Discovery Communications. Let’s just say their records aren’t stellar.

The fact that two of the four head companies involved in healthcare, while today Congress voted to roll back healthcare coverage for tens of millions of Americans in order to give a massive tax break to the wealthiest two percent speaks to the third leg of the book—how it undermines democracy. Speaking of a paper by Martin Gilens of Princeton and Benjamin Page of Northwestern on influence in policymaking, he tells us how:

They concluded that the average voter does not matter. Nor do interest groups that claim to benefit the little guys. Politicians respond to rich people and groups organized to advance their own narrow interests. Compared to economic elites, average voters have a low-to-nonexistent influence on public policies.

That politicians respond more to those that fund their campaigns than those that vote them in those campaigns is unlikely to surprise you, but the case Clifford makes for how it’s tied to and exacerbated by rising CEO pay and plutocracy might. As Warren Buffett once sadly noted, "There's been class warfare going on for the last twenty years, and my class has won":

[B]etween 1980 and 2014 the average real income of the Mega Rich has nearly quadrupled, increasing by 381 percent. Over the same period, the Merely Rich doubled their income while the bottom 90 percent lost ground, suffering a 3 percent decline.

The book would be unbearably depressing if weren’t so wittily acerbic and educational in skewering the current system.

And, in the end, it’s also hopeful, as Clifford suggests some simple fixes, such as boards becoming more involved, asking more of their directors, and disallowing one individual from being both CEO and chair of the board. He also suggests a tweak to regulation, that the “the SEC should adopt reforms proposed in the seventies to prevent market manipulation in corporate buybacks,” a tool CEOs can also easily use to increase their payday at the expense of shareholders and the health of the economy. He also suggests an idea borrowed from the sports world that I think is brilliant—a luxury tax on excess executive compensation.

It all begins, though, with boards taking some control, and a simple idea Clifford has actually enacted while chairing a compensation committee:

The only way to fully align the CEO’s interests with the shareholders is to make him one. At least half his compensation should be in the form of restricted stock—ideally, two-thirds stock, one-third salary. … It’s that simple—Salary plus restricted stock. No pay for specific performance, no short-term bonus, no stock options, no bonus bogeys, no after-the-fact adjustments by the board, and no pay consultants—nothing except salary and restricted stock.

Here’s hoping some of those ideas and opinions form ripples that begin to help us extricate ourselves from the third great peak of income inequality in American history, with reforms of a scale accomplished when we put an end to the first two of the robber barons and the Gilded Age. If we can, it well help the companies that lead the charge, the economy as a whole, and may just save our ongoing experiment in self-governance. 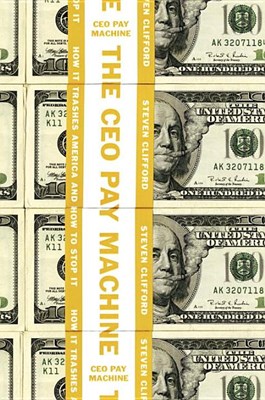