The End of Average: How We Succeed in a World That Values Sameness

Todd Rose offers up a book to help us put an end to average in our own thinking, in the businesses we operate, and the society we live in. The End of Average begins with the story of the United States Air Force in the 1940s. It was a time when there was an unusual number of crashes occurring, with most of them being chalked up to human error because the planes were not found to be malfunctioning. But the occurrences were so frequent, and pilots trained so well, that it seemed something else had to be happening. It turned out that there was. The cockpits were designed for an average sized pilot, based on the physical dimensions of hundreds of male pilots measured in 1926. The solution to this wasn’t what you might think; The average hadn’t changed in the previous two decades, it’s that the average pilot doesn’t exist. “If you’ve designed a cockpit to fit the average pilot,” Todd Rose tells us, “you’ve actually designed it to fit no one.”

Any system designed around the average person is doomed to fail.

The man the Air Force put in charge of studying the problem released his findings in 1952, recommending that they fit cockpits to the individual rather than "the average pilot." Rose finishes the story:

In short order, the Air Force demanded that all cockpits needed to fit pilots whose measurements fell within the 5 percent to 95 percent range of each dimension.

When airplane manufacturers first heard this new mandate, they balked, insisting it would be too expensive and take years to solve the relevant engineering problems. But the military refused to budge, and then—to everyone’s surprise—aeronautical engineers rather quickly came up with solutions that were both cheap and easy to implement. The designed adjustable seats, technology now standard in all automobiles. They created adjustable foot pedals. They developed adjustable helmet straps and flight suits. Once these and other design solutions were put into place, pilot performance soared, and the U.S. Air Force became the most dominant air force on the planet.

And so, the US military, an organization known more for conformity than individualism, is the leading example of an organization that heeded the call and got it right when it comes to abandoning the false ideal of the average and embracing the uniqueness of each individual, with extraordinary, literally world-altering results. Why? Rose explains:

Why was the military willing to make such a radical change so quickly? Because changing the system was not an intellectual exercise—it was a practical solution to an urgent problem.

The problems inherent in adhering to the average in the rest of society are just as urgent, but they are still hidden. It is what Rose calls “The Hidden Tyranny of the Average.” From our body type and intelligence to our talents and character, we are all judged by “an arbitrary standard”—that of the average. Yet the very idea of “average,” Rose tells us, is a human invention born of the Industrial Age and its needs, and no longer fits today’s reality or our current challenges. (In some fields, such as the false idea and model of "the average brain" in neuroscience, it is actively damaging our understanding and leading to unjust outcomes in fields like criminal justice.)

As the director of the Mind, Brain, and Education program at the Harvard Graduate School of Education, he is at the forefront of the science of the individual. He is, in fact, the director of the Laboratory for the Science of the Individual at Harvard. But his path there was anything but typical—or average. Fifteen years before he joined the faculty at Harvard, he had dropped out of high school with a 0.9 GPA. At twenty-one, he was “working as an in-home nursing assistant performing enemas for $6.45 an hour” and was on welfare to support his wife and two sons. He had always been an underachiever, and always been told the problem was with him. Evetually, he stopped “trying to conform to the system and instead focused on figuring out how to make the system fit” to him. On that journey he learned a lesson that has informed his work and forms the central premise of his book:

The central premise of this book is deceptively simple: no one is average. Not you. Not your kids. Not your coworkers, or your students, or your spouse. This isn’t empty encouragement of hollow sloganeering. This is a scientific fact with enormous practical consequences that you cannot afford to ignore.

The book covers a lot of ground. He credits an out-of-work Dutch astronomist with “The Invention of Average” during the first wave of “big data” coming out of the bureaucracies and militaries of the early nineteenth century, and tells us how a wealthy merchant in England added rank to the equation by associating virtue with those “above average.” It is this paradigm that we have inherited to the point that we’ve all come to unconsciously judge ourselves against these averages and ranks, and standardization has come to dominate all aspects of how we are judged by society, from tests in school, to qualifications for a job, to our very health and body type. In his discussion of “averagarianism,” you’ll meet an old friend of management thinking, Frederick Winslow Taylor, and learn how Taylorism trickled into our “factories of education” that separated children by age rather than by interest or aptitude.

He will tell us how:

In the span of roughly fifty years—from the 1890s to the 1940s—virtually all our social institutions came to assess each of us in terms of our relationship to the average. During this transformative stretch, businesses, schools, and the government all gradually adopted the guiding conviction that the system was more important than the individual, offering opportunities to each of us according to our type and rank.

As much as this may have contributed something substantial in the building of a “relatively stable and prosperous democracy,” our individual uniqueness has become a burden rather than a harbinger of the unique abilities we have to offer the world. For that reason, Rose tells us it is now time to “Overthrow the Average.” In Part Two of the book, he discusses the principles of individuality on which we can do that. Perhaps the most relevant to our audience is the section on “When Businesses Commit to Individuality.”

He discusses business throughout the book, documenting the faults of Taylor’s scientific management and sharing stories of companies “like Deloitte, Google, the Adler Group, and IGN—who have adopted, even if implicitly, the principles of individuality with great results.” But it is in this section he fully dives into what individuality offers to business.

He counsels companies to, instead of trying to employee-proof their operations so that they can’t be disrupted (usually leading to frustrated employees that feel like they can’t contribute unique to themselves), it’s important to allow individual the ability to contribute their full range of talents to improve operations, even if that means coming up with new ways of doing things. To illustrate that point, Rose contrasts Costco and Walmart. Whereas Walmart’s “mastery of Taylorist efficiency has produced one of the largest and most robust enterprises in history,” Costco has produced more profitable returns than Walmart for its investors since going public, and does so while paying approximately 75 percent more and providing their employees with industry-topping benefits and the ability to quickly advance in the company. They hire for attributes like industriousness by recruiting students from local colleges to work part-time, and then promoting from within, rather than “hiring graduates from famous universities.” This approach is not only sustainable; it is scalable. They are now the third largest retailer in the United States, and have been growing at an annualized rate of 9 percent over the past decade. How are they doing all of this concurrently?

One reason is employee loyalty. Not only are individual Costco employees much more productive than those at competitors like Walmart, Costco employees rarely leave the company. At Walmart the turnover rate is approximately 40 percent; At Costco, the turnover rate is 17 percent and drops to an astonishing 6 percent after the employee has been there for a year. One study found that when you factor in the hidden cost of employee turnover that comes from having to hire and train the next round of replacements (conservatively set at 60 percent of the employee’s salary), Costco actually pays less per employee than Walmart. Paradoxically, Costco is beating Walmart at its own game—the game of efficiency.

This belies the notion that efficiency comes at the expense of humanity and individuality, or that the social contract that once existed between employers and employees has been irrevocably shattered in America. Here is one of America’s great success stories, being successful by promoting the success of their employees, and doing their part to restore the American Dream—not to become “rich or famous,” but to have the “opportunity to live your life to its fullest potential, and being appreciated for who you are as an individual, not because of your type or rank.” They are doing it by respecting their employees, advancing them from within, and paying them a living wage so they don’t have to apply for welfare or a second job just to make ends meet. It is a commitment to their employees as individuals, a novel approach (it seems) today, but one they’ve proven can be a successful one.

It is this kind of eye-opening, mind-expanding reality documented at every turn in The End of Average that is so valuable to business practitioners, and that will help put an end to average in your own thinking. 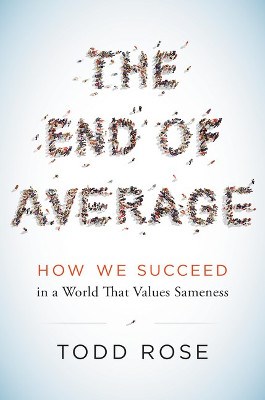 The End of Average: Unlocking Our Potential by Embracing What Makes Us Different