The Founder's Mentality: How to Overcome the Predictable Crises of Growth

Chris Zook and James Allen have a new book on strategy, and is the first of theirs that turns the company focus inward. Chris Zook and James Allen are known for their books on strategy, particularly their two about strengthening and expanding upon companies’ core business. (The first was Profit from the Core, and we named its follow up, Beyond the Core, one of The 100 Best Business Books of All Time.) Their new book is a departure in the sense that they turn their attention, for the first time, from external strategy to internal, but it continues their now fifteen year bent of focusing on companies’ roots in the process of helping them in periods of growth, turning it in this latest effort to what they call “the founder’s mentality.”

The founder’s mentality … consists of three main traits: an insurgent’s mission, an owner’s mindset, and obsession with the front line. In their purest expression, these traits can be found in companies that are founder-led, or where the clear influence of the founder still remains in the principles, norms, and values that guide employees’ day-to-day decisions and behaviors.

Maintaining those elements, and the organizational moxie that comes with them, is simply a must for smaller businesses to successfully start up and survive. But as smaller companies begin to really thrive, and encounter the challenges that arise in the process of growth, those animating elements of a start-up or small business—the vitality and vigor that bring it to life, that outsider outlook, closeness to the customer, and sense of ownership across the organization—often start to wane. Zook and Allen explain how:

All too often … companies lose their founder’s mentality as they become larger. The pursuit of growth and scale adds organizational complexity, piles on processes and systems, dilutes the sense of insurgency, and creates challenges in maintaining the original level of talent.

And that’s the paradox of growth. It’s a paradox that is arising and occurring more often and more quickly in today’s companies. Insurgent companies are growing and scaling at rates we’ve never witnessed before, and are taking on incumbents sooner, but they are also stalling and falling backward more often and more rapidly once they get there. That is because growth is always accompanied by internal crises, and rapid growth not only gets companies to those crisis points sooner, it tends to exacerbate them. The authors describe three large crises, in particular, that are both predictable and avoidable: the overload that occurs when companies scale too rapidly; the stall-out that occurs when “rapid growth gives rise to layers of organizational complexity and dilutes the clear mission” of the company, and; free fall, when a company’s business model seems to fail suddenly and its core market dries up, which leads to a sense of lost control and inability to respond.

Most insurgent companies, if they survive at all, turn into either stable incumbents or struggling bureaucracies while battling the crises of growth. Both have lost the entrepreneurial energy found in insurgents, but struggling bureaucracies also lack “the defensive fortifications that protect successful incumbents.” The truly successful companies are what the authors call scale insurgents, which have retained a founder’s mentality and maintained their entrepreneurial energy, but have been able to scale up in the process and build some real market share and influence.

You’ll find those four circumstances: “insurgent,” “struggling bureaucracy,” “stable incumbent,” and “scale insurgent,” on the author’s Founder’s Mentality Map, and follow along as they tell the stories of a wide array of companies and chart their different journeys across the map. Most aren’t straight lines, and most end up roaming the gray areas in the middle of the map. The companies that avoid the three predictable crises (and after explaining each in detail, they devote a chapter to each), “Journey North” in a straight line from insurgent to scale insurgent. What each story and circumstance make clear is that:

To win consistently on the outside in business, you must also be set up to win on the inside.

The best way to do that, the authors tell us, is to “embrace the founder’s mentality” across the entire organization and at all levels of leadership. The search for a company’s full potential has been a consistent theme and starting point across all of their books, but this is first to turn that search inward. But this is not a culture-change book. It is a growth book. Yes, it focuses on the internal aspects of a company, but it is focused specifically on the problems that occur in growing companies, and on what’s needed to avoid the largest, company-crippling crises to achieve sustainable growth.

In that sense, Zook and Allen are staying true to their own core—their core research on how companies grow, which is immense and impressive, and their core purpose of helping leaders through that process. The other consistency across all their books is the great blend of research and storytelling. “Research is the bedrock on which we’ve based this book,”” they tell us, “but stories are how we’ve built it up.”

We’ve heard before how companies can lose their sense of urgency as they grow and become entrenched forces within their industries—that a complacency and a false sense of safety often begin to set in. The Founder’s Mentality takes it a step further and calls for maintaining a sense of insurgency, a sense of ownership, and a sense of your customers—the founder’s mentality. Perhaps the most pointed quote in the entire book, the one that sums up its underlying message and purpose, is this:

Without the founder’s mentality, incumbents become bureaucrats, making them increasingly vulnerable to insurgents who are adapting and scaling faster than ever.

Fending off those threats, both internally and externally, requires a balance of being able to get in the weeds and work on continual improvement, and holding on to a larger vision and goal for the future, the ability to move with speed and agility in the short term, but maintain focus on and build stability for the long-term. It requires a continued commitment to core principles and purpose. It requires a founder’s mentality. 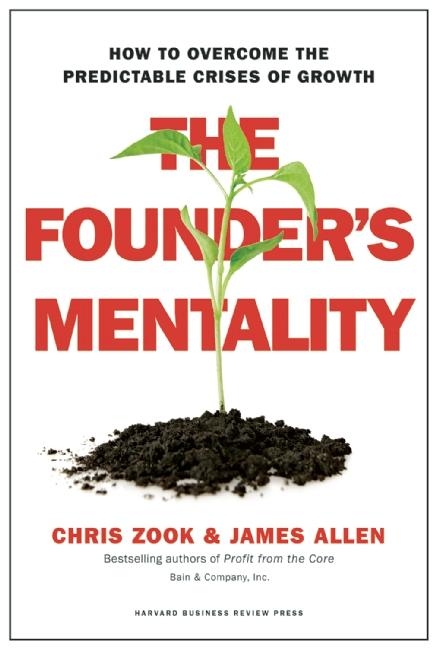 The Founder's Mentality: How to Overcome the Predictable Crises of Growth