Scott Galloway tells the story of the four technology companies dominating the economy and world today, providing lessons on each that entertain, inform, and may cause some alarm. The five largest companies in the world a decade ago consisted of two titans of the industrial era (ExxonMobil and GE), two banks (Citigroup and Bank of America), and Microsoft. The only one that remains in the top five is Microsoft, still entrenched in third place, and now surrounded by other technology companies—companies Scott Galloway has dubbed The Four Horsemen. Galloway, a successful serial entrepreneur (though, for some reason, I think he would disapprove of that label) and business school professor, has made it his job to teach the lessons of these four digital giants in his new book, The Four: The Hidden DNA of Amazon, Apple, Facebook, and Google. The lessons include the basics of any business school education, the Finance, Marketing, Operations, and Management aspects, but they are more rooted in how these technology firms succeed by appealing to fundamental psychological desires deeply embedded in our evolutionary past.

Galloway begins with Amazon, our need to acquire stuff to survive, and a concise yet complete history of retail from the corner store to e-commerce—and, perhaps counterintuitively, back to the physical, bricks-and-mortar store again.

The truth is that the death of stores has been vastly overstated. In fact, it’s not stores that are dying, but the middle class—and, in turn, the businesses that serve that once-great cohort and its neighborhoods.

On top of its foray into bricks-and-mortar bookstores, Amazon’s acquisition of Whole Foods gives it 460 stores in wealthy, heavily populated, urban areas—its key demographic. It not only announces it’s full-forced entrance into America’s largest consumer sector, grocery, it gives them immediate warehouse space in those areas that could be used as “locations for returning online orders of any kind, drastically cutting costs” on shipping, their largest expense. But Amazon isn’t satisfied with simply dominating retail. It is quickly becoming a major player in media and entertainment, as well—and a Prime membership connects the two. It looks very likely that Amazon Prime memberships will outnumber cable subscriptions within a decade. “Seventy percent of U.S. high-income households,” Gallowsay informs us, already “have Prime. Amazon storefronts will effectively be warehouses that support Amazon’s, and other retailers’, last mile problem.” And while we’ve also heard a lot about Amazon drones to solve that “last mile” problem, along with a patent for floating warehouse in the sky, a lesser known fact is that Amazon is already building a trans-Pacific ocean freight service overseen by retired military generals, and operates a fleet of 767 cargo planes.

Amazon, like any sovereign superpower, pursues a triad strategy: air, land, and sea.

Behind that entire infrastructure is what Galloway believes is Amazon’s core competency: storytelling. It is “Earth’s Biggest Store,” and that story is what keeps the capital investment flowing in, and the customers coming back. It is all in pursuit of Amazon doing what it does best: catering to our hunter-gatherer instincts, and removing the friction between us and the all of the stuff we want to have and hoard.

Where Amazon appeals to the need to hunt and gather, Apple’s appeal, and advantage, is in our need to procreate. And for that, it appeals to our desire for luxury.

Luxury is not an externality; it’s in our genes. It combines our instinctive need to transcend the human condition and feel closer to divine perfection, with our desire to be more attractive to potential mates.

When he speaks of those who will lose most in the competition with Apple, he doesn’t speak of other phone or computer companies, but of other “mid-level luxury companies, the ones selling stuff for less than $1,000.” That is who is competing against Apple for their customers’ discretionary dollars, and even those doing well are being dwarfed by Apple’s success:

For example, 2015 was arguably Nike’s best year. The firm increased its revenue by $2.8 billion. By comparison, Apple grew its revenues $51 billion.

That $51 billion has to come from somewhere, and the luxury products Apple offers are tied into a technology eco-system that spans work, home, and social life. But, even here, retail is a key. Galloway insists that:

It wasn’t the iPhone, but the Apple store, that defined Apple’s success.

Those (currently 492) retail stores will be its “immune system” as competitors build—and arguably already have built—better phones. Sleekly designed and positioned prominently next to other luxury brands in affluent areas, Apple stores are appealing in a way that samsung.com can’t match. Here Galloway reiterates his point that it’s not stores that are dying, but the middle class—adding that “digital sales are still only 10–12 percent of retail.” And while the digital ladders to scale barriers of entry to business get taller, Apple’s stores—located in affluent areas—provide “more analog (time/capital expensive) moats” to cross.

Facebook fuels our psychological need for love and connection. Analysis of Facebook behavior shows that individual’s communication plummets on the site when their status is changed from “single” to “in a relationship.” But forty-four percent of Americans also turn to Facebook for their news, regardless of their relationship status, making it the world’s largest media company—without the pesky and costly need to pay people to produce the content it profits from through advertising. But, being built on passion, this form of media comes with real trade-offs. Because, even though media is a primary component of what they deliver, and is in the very name “social media,” Facebook insists that it is not a media company, but a platform. As such, they feel no need for editorial discretion over the content posted to its site, cloaking its abdication of editorial standards in the guise of free speech. Without such standard, the most extreme views rise to the top, get shared the most, and become more visible and viral:

Moderates are hard to engage or predict. Picture a video with some guy in a cardigan sweater discussing, in a balanced tone, the pros and cons of free trade with Mexico. How many clicks would that get? Marketing to moderates is like fracking for gas. You only do it if the easier alternatives aren’t available. Thus, we are exposed to less and less calm, reasonable content.

If sheer reach is a measure of a company’s success, Facebook “may be the most successful thing in the history of mankind.” It reaches more people, more intimately—appealing to our need to connect to one another—than any other company on Earth.

And Google satisfies our search for a higher power, an answer to our questions. Our hopes, dreams, worries, and secrets all end up in its search box—and are then sold back to us. Having served on the board of The New York Times, the section on Google is largely a tale of his own foray into the war for eyeballs and ad spend, and the opportunities he believes traditional media has missed in leveraging both its reputation and content. But Google has larger ambitions than to sell ads.

Behind the curtains, Google was undertaking one of the most ambitious strategies in business history: to organize all the world’s information. … And with absolute single-mindedness, the company has done just that.

He doesn’t pull any punches on the companies or their iconic and revered founders. Speaking of Jeff Bezos’ call for a universal basic income, even while Amazon avoids the taxes that would pay one, he writes:

What’s clear is that we need business leaders who envision, and enact, a future with more jobs—not billionaires who want the government to fund, with taxes they avoid, social programs for people to sit on their couches and watch Netflix all day. Jeff, show some real fucking vision.

Speaking of Steve Jobs' irrational passion for bringing consumer products into the world, while denying for years—even in court—his paternity of a child he brought into it, Galloway writes:

It is conventional wisdom that Steve Jobs put “a dent in the universe.” No, he didn’t. Steve Jobs, in my view, spat on the universe. People who get up every morning, get their kids dressed, get them to school, and have an irrational passion for their children’s well-being, dent the universe. The world needs more homes with engaged parents, not a better fucking phone.

But he also gives these companies and their founders their proper props, explaining what each of them understood before others did, and how they were able to capitalize so massively on that understanding to become the largest companies in the world today. He explains how, while in every other arena barriers to entry are crumbling, each of these firms has built moats around their businesses that are nearly impossible to ford. And yet, like all others before them, he believes they will eventually fall:

Business mimics biology and, thus far, the mortality rate is 100 percent. The same is true of the Four. They will die. The question is not if, but when, and by whose hand?

And thus begins his look for the Fifth Horseman. He identifies eight factors that are prevalent in the Four—product differentiation, visionary capital, global reach, likability, vertical integration, AI, accelerant, and geography—and explains each in detail. He then applies that checklist to see what company may be riding up on the Four. Alibaba? Tesla? Uber? Walmart? Microsoft? Airbnb? IBM? Verizom/AT&T/Comcast/Time Warner? He takes a look at each.

And finally, he takes a look at what qualities are most valuable in an economy dominated by the Four—including emotional maturity and curiosity, ownership of your ideas and responsibilities and a competitive nature. This section of the book is basically a really tight 34-page career guide for the digital age and economy.

Understanding the Four is crucial to understanding our age and economy, to being in business and making a living in it. Galloway makes a strong argument that the lessons he teaches in the book should form the basic curriculum of the second year of MBA programs—which is currently, in his view, irrelevant and worthless. Of course, in The Four, he gives you those lessons for a fraction of the $100,000+ you’ll pay for an MBA. It is an existential alarm bell wrapped in a business lesson wrapped in an entertaining and often hilarious (and, yes, occasionally blue-languaged) series of stories built with great writing. It keeps you entertained to make sure you’re informed. 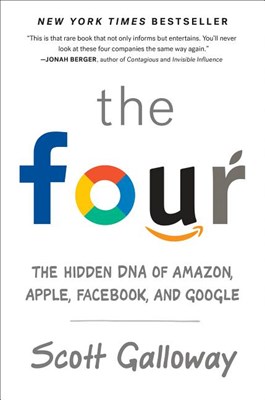