In his new book, Simon Sinek takes on the difference between finite and infinite games, and the damage done by shareholder capitalism.

The ability to recognize which kind of game you are playing is essential to success, and here is a hint: most games are infinite.

And (barring nuclear war, catastrophic climate change, or an AI apocalypse) all these journeys will go on. Our job is to improve the path, to make these journeys open to all, to make them easier to traverse, safer, fairer, more ethical, and more just. And that is what great leadership is all about.

Sinek focuses his attention mainly on business, but, as always, does not confine himself to it. The stories range from the important mundanity of everyday business operations (the way Alan Mulally ran meetings to turn Ford around) to the truly macabre (there is a scene from the siege of Leningrad in WWII that is going to haunt my memory for awhile). What ties them all together are the five essential practices of operating with an infinite mindset, the ability to:

A good portion of the book is devoted to a critique of the ideas of Milton Friedman and the shareholder value model of capitalism that has dominated our organizations and economics for the past 50 years. In his estimation:

These ideas are now firmly ingrained in the zeitgeist. Today it is so generally accepted that the “owner” of a company sits at the top of the benefit food chain and that business exists solely to create wealth, that we often assume that this was always the way that the game of business was played and is the only way it can be played. Except it wasn’t … and isn’t.

The reason the word “owner” is in quotations becomes apparent later on, when Sinek explains that it is contrary to the reality of how our financial markets work, in that shareholders generally “act more like renters” with only a short term, profit-extracting interest in a company.

Which means, it is possible that, for the past 40+ years, we have been building companies with a definition of business that is actually bad for business and undermines the very system of capitalism it proclaims to embrace.

Sinek is far from the first to state this, or even the first author in the business book genre to do so, but it is a point that can’t be stressed enough if we have any hope to turn the organizational tide back in the direction of something more egalitarian and democratic, if we want to start considering human will over “human resources” (the first is infinite, while the second is finite— and the first thing slashed to satisfy the profit-maximizing interests of shareholder capitalism).

Does ethical custom mean that if we do something frequently enough it becomes normalized and is thus no longer unethical? If so many companies use regular rounds of mass layoffs, using people’s livelihoods, to meet arbitrary projections, does that strategy cease to be unethical? … As a point in fact, laws and “ethical customs” usually come about in response to abuses, not by predicting them. In other words, they always lag behind. Based on the common interpretation of Friedman’s definition, it’s almost a requirement for companies to exploit those gaps to maximize profit until future laws and ethical customs tell them they can’t. Based on Friedman, it is their responsibility to do so!

Operating within the rules, EpiPen manufacturer Mylan raised the price of the company’s life saving product consistently—and, in the end, astronomically—over the years simply because they knew the people who relied on it had no other choice, putting earnings above medical ethics. And, “When asked later if she was sorry for what happened, CEO Heather Bresch replies, ‘I wasn’t going to be apologetic for operating in the system that existed.’” But, as a leader, she defined the system. She decided which game to play, choosing short term, finite profit maximization over long term, infinite minded medical ethics and human wellbeing. The examples of finite-minded leaders and their deleterious influence on the organizations they ran—Tim Sloan at Wells Fargo, Steve Ballmer at Microsoft, Mike Duke at Walmart, Robert McNamara at the Defence Department during the Vietnam War—are depressingly extensive. But there are also extensive examples of companies staying true to their values, like Kip Tindall at the Container Store, who refused to lay off employees at the height of the recession, CVS executives’ decision to honor its health-driven mission by ending cigarette sales in its stores, and Patagonia’s insistence on acting ethically pretty much across the board. A company dedicated to getting people out in nature, they do everything they can to reduce waste and lessen their environmental impact, going so far as taking out advertisements detailing the environmental cost of their products and telling their customers not to buy it if they don’t need to. They not only make their own offices a great place to work, they hire auditors to dig deep into their supply chain to uncover inhumane labor practices in an effort to identify and alleviate the human cost of their operations. They admit that they’re not perfect, but they hold themselves accountable to their own values over and above the monetary value. In the game of business, Sinek writes, “Patagonia is not driven to be the best, they are driven to be better.” Being a private company, they admit, allows them to take such progressive stances, but why is it that public companies are incentivised to do the opposite, and punished by Wall Street when they do right by employees and other stakeholders, when they invest in their people or other long term interests and values? What other companies write off as externalities are not external to the planet; they affect life here on Earth both personally and profoundly.

When my brother and his wife got their girls a pony, I declared that they had won parenting. People often point to others who are “winning at life,” but it is always tongue-in-cheek. I think those who say such things with a straight face are widely derided as delusion. Those who think it’s possible are dangerous. Sinek notes how, after we “won” the Cold War when the Berlin Wall came down and the Soviet Union broke apart, our ideological competition ceased to be between capitalism versus communism and became Republican versus Democrat, and it is ripping our country apart. He uses it to stress the importance of identifying a Worthy Rival (I’ve done a poor job in this review of associating Sinek’s examples with the five essential practices of an infinite mindset), but it is also an illustration of how damaging it is to think you have won, or ever can win, what is an infinite game.

Sinek’s ultimate point is that “like all infinite games, in the game of life, the goal is not to win, but to perpetuate the game.” I’d only add that we can also aim to improve how the game is played. We can get better at it. When it comes to the families we raise, the businesses and communities we build, the economy and country we help shape as citizens and workers, there is no “winning,” only getting better, promoting sustainability and health, and perpetuating the game. We have a long time until the ultimate engine of the economy, the sun, burns out. Let’s try to serve something greater than ourselves, and shareholder interests, with our time under it. 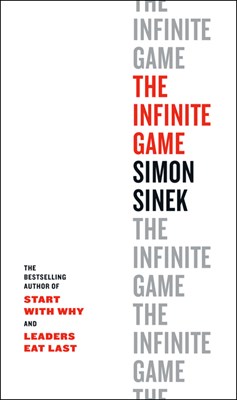