The Inside Game: Bad Calls, Strange Moves, and What Baseball Behavior Teaches Us About Ourselves

Everyone in baseball and in business, an interest in either or in the way we think, should own this book. 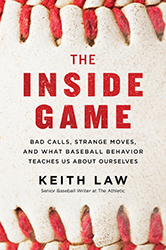 The Inside Game: Bad Calls, Strange Moves, and What Baseball Behavior Teaches Us About Ourselves by Keith Law, William Morrow

I have been reading the insightful analysis of baseball writer Keith Law for well over a decade now, having first come across his work when he was at Baseball Prospectus. It is around the time I first came across the pioneering work of Daniel Kahneman and Amos Tversky, cognitive psychologists whose study of cognitive bias and risk gave rise to the field of behavioral economics, and who—if you’ve read a fair amount of business books in your life—you are certainly familiar with. This week, those two worlds collided in Keith Law’s new book, The Inside Game. It is, as Law explains (or hopes):

[A] book for the lay audience that explains cognitive biases and illusions, using examples from the baseball world, enough to make you think about them at home or at work, and maybe to decide you want to read more about the topic.

Even if it doesn’t make you want to read more on the topic, the book will give you a solid grounding and understanding of it all. If you have a decent understanding already, it will be an entertaining refresher course tying it all to stories about our the national pastime and a reminder of how we all fall prey to irrational thinking, important because knowledge of heuristics, bias, risk aversion, and the like doesn’t make us immune to them. And because it’s about sports, it makes these somewhat weighty topics lighter reading—making it safer to explore our own bias, and even allowing us to laugh at and even deliberately maintain some of our irrationality in our fandom should we choose to, while exposing it on more consequential issues that we can hopefully work to change. Let me explain.

Law opens the book making the case for robot umpires, which I am not vehemently against only because I’ve become less vehement in my opinions in general. I think he’s right, but I am one of those that irrationally argue for the “human element” they so frustratingly bring. It’s not the only absurd element of baseball I want to hold onto. I can’t tell you how many passionate arguments I had in my 20s about the designated hitter (most love it or hate it, but I actually like that it exists in the National League while it doesn’t in the American, an irrational and rather arbitrary difference that my brother still finds it infuriating that I support to this day). I used to have very strong opinions about these things, something I’d describe more as aesthetic preferences and delightful idiosyncrasies in baseball today. The fact that there is not a standard playing surface, and different ballparks have different dimensions that can skew a batter’s numbers pretty dramatically is another. So I’ll keep preferring that human umpires call balls and strikes, even if I sometimes yell at them on my TV (and I still have questions about the efficacy of the replacement technology, as well). I know I’m likely wrong about it, and that what I say is a matter of aesthetics is more likely status quo bias, but I don’t really care enough to change my mind about it.

It’s similar to knowing that the Green Bay Packers have been a superior organization in almost every way to the Chicago Bears over my lifetime, with a better business model to boot, which in any other context would lead me to support the Packers over the Bears. But, besides the fact that Walter Payton once patted me on the head while passing me at a Bears training camp in Platteville, Wisconsin when I was five (I have photographic evidence), and that my family would banish me if I began rooting for the Packers, I feel almost physically ill when I see the colors of a Packer uniform (a pretty common occurrence here in Wisconsin, where almost all my best friends are Packer fans). I recognize it is an irrational bias. I wouldn’t allow myself such bias against any other group of people for such an arbitrary affiliation, or even more consequential ones like which political party they support, but such tribalism is part of the fun of sports if we can keep it in perspective. It is also part of what I found so fun about this book. Recognizing the ways in which we are so irrational, why “we cling to untruths long after they’ve been disproven or lost their usefulness,” while getting to read about baseball at a time when I’m missing it so much was really nice. The fact that Law uses words like sportsball and codswallop was, too.

It’s not all fun and games and baseball, though. Yes, you’ll learn how the amount of press they received during the year likely led to an availability bias that gave Joe DiMaggio the American League MVP award in 1941, and the National League award to Andre Dawson in 1987, when they were clearly not the best players in those years—and to Rafael Palmeiro winning a gold glove (the award given to the best fielder at every position) in 1999, a year he played just 28 games at that position and spent most the year as the designated hitter. The decisions could all be considered indefensible at the time, but with hindsight, they look especially bad. But you’ll also learn how hindsight distortion affected the 9/11 commission and how the illusory truth effect has affected vaccination rates in this country as people heard over and over again that vaccines cause autism, which is unequivocally untrue. It is not a matter of opinion, but of science. And, while Law suggests it is important that all of us say so, the fact is also that when presented with such scientific, fact-based evidence, people tend to double down on such beliefs:

Yes, sadly, giving facts to people who believed falsehoods about vaccines only made them further convinced in the falsehoods.

That is of great consequence right now, as we parse out what is true, and what we need to do as individuals and as a society in the midst of a pandemic. Something as simple as abandoning the silly “five-second rule” (As Law notes, foods pick up microbes from other surfaces instantaneously) could be crucial to our health. On a wider scale, what we hear day after day from our leaders and the echo chamber of our social media accounts can make a dramatic and potentially deleterious effect on how we respond to the larger health crisis we find ourselves in, as it did in the Congo last year:

The 2019 Ebola outbreak in the Kivu region of the Democratic Republic of the Congo … has been exacerbated by false information and errant beliefs; one research survey found one in four residents believed the outbreak wasn’t real. … The challenge of dealing with disease outbreaks is thus amplified by the challenge of fighting disinformation and a noncompliant public.

In my reading and internal response to the material, I found it led me to think beyond the smaller, sportsball ideas like lineup protection (which doesn’t work), or health issues like vaccinations (which do), and into a systemic realm of how our economics work, and why they haven’t been working for so many even before the current crisis.

The fact is that we have been operating our entire economy on an illusory truth for forty years now, and the ideas in this book, and in behavioral economics as a whole, debunks it pretty easily. It is the idea of “homo economicus” or “economic man,” that we are all rational economic actors who behave in ways that optimize our own self interests. It undergirds the idea of shareholder value theory which has dominated the business world and overall economy for decades, and we’ve known it to be untrue since the theory began to take such hold, leading to the pursuit of short term profits over long term stability and the social role corporations took on in postwar years in the absence of a more European-style welfare state. It has since shredded the social safety net to the point that, for instance, we are in the unfortunate position now of states having laws on the books that require people to work if they want food assistance, even as 26.5 million American workers have filed unemployment claims and stay and safer at home orders mean many can’t work—shredded it to the point that people who were able to work before this were paid wages that required them to be on government assistance in the first place. That, in my mind, is not a hand out to the poor, but to the businesses who are allowed to pay so little to American workers and keep them poor. It is not like this everywhere. As Nicholas Kristof and Sheryl WuDunn wrote in their recent book, Tightrope:

Keith does not go down this final line of thinking in the book, and I don’t know that he would agree with me doing so or with my sentiments. This review is admittedly more about my reaction to the book that what you’ll be reading if you pick it up, something I try not to do, but we’re all stuck at home in the middle of a pandemic, and I believe anything that helps further debunk the ideas that led us into this situation is helpful, and this book does. Anything illustrating the ways in which we are more prone to make decisions that are biased and irrational—Predictably Irrational decisions, as Dan Ariely explained—that explains the realities of behavioral economics and helps end the idea of economic man, is welcome. Anything that leads us back to a more fact-based reality, to a more altruistic and compassionate understanding of why we act the way we do and how we can do better, is what we needed.

Using good baseball stories makes it all the more accessible and entertaining, and because the book ends with examples of people overcoming cognitive bias and making good decisions, optimistic. I think everyone in baseball and in business, an interest in either or in the way we think, should own this book. It will help you think more critically and make better decisions and, Law hopes, “Yell smarter things at your TV” when we’re able to watch baseball again.