The Lost Art of Closing: Winning the Ten Commitments That Drive Sales

Really good, humane and effective sales books don’t come around too often, so when they do you should snatch them up. Anthony Iannarino's new book is one of them. The sales profession has a pretty poor reputation. Most of the traditional sales methods taught were self-oriented, focused on ways in which salespeople could manipulate others with different sales tricks and tactics, rather than on how they could help them by getting to know what they really needed. But sales has changed, in part because consumers got wise to the tricks, and in part because of consumer-protection laws that were passed to protect against them, but I think most of all because it’s better for business.

Anthony Iannarino has witnessed the change in the field. He believes we have transitioned from a caveat emptor (let the buyer beware) world to a caveat venditor (let the seller beware) world. The internet has given buyers more options than ever before, while social media has given them a word of mouth bullhorn with which to damage the reputation of unscrupulous businesses. In this environment, bad sales behaviors simply don’t work as well:

But the negative image lingers of salespeople as being self-oriented, manipulative, and pushy—even though successful sales people are exactly the opposite.

The perception has stuck, and it is one that Anthony Iannarino shared when he began his professional life at his family’s temporary staffing business. Being a family business, when there wasn’t anything to do in his role as a recruiter, he “spent time calling on companies, scheduling appointments, meeting with their people, and (hopefully) winning their business.” He continued doing the same at his next job, and was so good at winning clients that his manager asked him to go into full-time outside sales. Still harboring a negative view of sales, he rejected the idea outright, going so far as to tell his boss, “I hate salespeople.” What he didn’t realize is that he was already doing it. Grudgingly accepting the offer, he began to make calls with his manager:

And I saw that he was never selfish, manipulative, or pushy. Instead, he was all about finding ways to help his clients get the results they needed. He was the opposite of self-oriented. He was “other oriented,” a guy who worked with his clients, not against them. Once I learned this and began to apply it, I started to love sales—and to find success as a salesperson.

This accidental salesperson now has a sales blog that draws over 50,000 readers each month, and wrote The Only Sales Guide You’ll Ever Need—released last October. (Don’t worry, he offers an apology of sorts to the reader and explains why you might need this one, as well.) His sophomore effort, The Lost Art of Closing, compliments that comprehensive guide with a book for sales professionals to correct and update the very idea of what closing means. The author falls fully on the “always be closing” side of the always/never divide, but not for the commitment to buy. He argues for a progressive set of smaller “closes,” or “’advances,’ that progress toward the final close.” What Iannarino suggests is ensuring some form of commitment at the end of every interaction, an insight he gained from Neil Rackham’s 1988 book, SPIN Selling:

Once I read Rackham’s work, I applied the idea of gaining a commitment at the end of each interaction, and my sales results immediately improved. This practice alone was transformative, as it is the one thing that I have found that keeps deals moving forward. This insight alone has helped me generate literally hundreds of millions of dollars in revenue. That from a book that cost around twety-five dollars and takes four hours to read.

“It isn’t the ask that makes you a bad salesperson,” Iannarino insists, “It’s the self-orientation.” When you focus on your customer's needs, you become a trusted advisor in the process, focused on delivering the results they need. You begin to understand that closing happens in stages, like closing ground on an object you see in the distance—each step gets you closer to the goal.

The Lost Art of Closing walks its reader through ten specific commitments needed throughout the sales process:

Each of these commitments helps you not only win business, but helps you help that business in a more timely and professional manner by moving the process forward and delivering a solution for them. It is all based on Iannarino’s basic philosophy that:

I have two older brothers who work in sales here at 800-CEO-READ. They spend their days fielding calls from authors, publishers, and organizations needing to move books in bulk. Because that most often requires a high level of personal attention and customization, they rarely know what the solution to a customer’s needs will be before they call. Rather, they simply listen to their needs and help them explore ways in which we can help. The same can be said of those in our customer service department, two of whom have been with the company for over two decades, and have formed trusted relationships with customers that are decades old. I would describe what they all do as consulting sooner than I would describe it as selling, but that is the role of sales today—to act as a trusted advisor from which clients can expect a consistently exceptional outcome and a lifetime of value. The Lost Art of Closing puts that approach into an actionable and living philosophy, and provides a process that makes sure the focus is always on what the customer needs, and help you find a way to assist them on that journey, adding value in the process.

Really good, humane and effective sales books don’t come around too often, so when they do you should snatch them up. The Lost Art of Closing is one of them. 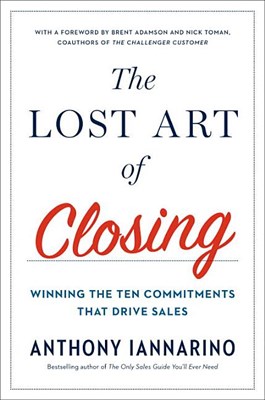