John Hope Bryant has been championing financial literacy for at least 25 years, and he has now written a book to deliver the memo directly to you. John Hope Bryant has been championing financial literacy for at least 25 years now, advocating for what he calls “silver rights,” which he believes are the civil rights struggle of our time. Bryant is the founder of Operation HOPE, an organization dedicated to providing economic education and access to capital to open the doors of opportunity for individuals in underserved communities. It is dedicated to poverty eradication, financial independence, self-determination, and economic freedom—because one isn’t really free without those things.

Bryant took a lot of heat from the black community last year after he went on Roland Martin’s radio show and described slavery as “first and foremost economic in nature.” What he did not say, of course, was that racism didn’t exist—then or now—or that it doesn’t course deeply through American society and affect everyday life in this country. Because he knows, and writes in his new book, that:

Racism is like rain: it’s either falling someplace or it’s gathering someplace else. You might as well get out an umbrella and start strolling through it—it’s not going to change, and so we must.

In order to change, to gain more self-determination and economic freedom, we have to come to grips with “what we don’t know that we don’t know” about the system we live in. In his previous book, How the Poor can Save Capitalism, he spoke of his own experience:

When I was growing up in the inner cities of South Central Los Angeles and Compton, I didn’t have a clue about free enterprise or capitalism. How did it work? How were its winners and losers picked, and who did the picking? Most important, how could I participate? Forget about it. There was no manual for poor people. We never got the memo.

It is a reality not confined to the neighborhoods he grew up in, or to Black America—even to America itself. It is a super majority of people in the worlds that make up what John Hope Bryant calls the Invisible Class. It is to these, “the least of these,” the economically struggling and unseen, to whom he dedicates this new book, The Memo. It is to those frozen out of the American Dream, not because they don’t work hard, but because they never got the memo. It includes even the struggling American middle class, who too often has “too much month at the end of their money.” Speaking of the comment he took so much heat for, he writes:

My point was that the base of all our problems is economic in nature. But all too often, far too many of us see the economic status quo as normal.

It is not normal.

And, if you’re a member of the Invisible Class, it’s absolutely not economically just. But no one is going to change that except you, and to change that you need to get the memo:

True power in this world comes from economic independence; this is also your primary protection from social injustice, political manipulation, and profiling.

Nobody can give you economic independence—you must gain it for yourself.

You, and only you, can gain this power from the way that you manage your “inner capital.” This inner capital is made up of your mindset, relationships, knowledge, and spirit. Financial capital (money or wealth) is a function of how you invest your inner capital.

If you have inner capital, you can never be truly poor. If you lack inner capital, all the money in the world cannot set you free. Once you have satisfied your basic sustenance needs—food, water, health, and a roof over your head—poverty has more to do your head than your wallet.

“There is a difference,” he says, “between being broke and being poor.” Being broke is an economic condition almost all of us have experienced; being poor is a state of mind.

F.S. Andrews wrote a great book in 2011 entitled Monoculture: How One Story Is Changing Everything. The “one story” referred to in the subtitle is the economic story. We live in an economic age, one that Andrews argues is changing our lives in profound, not necessarily beneficial, ways. And that may be true, but—like racism—that doesn’t change the fact that it exists. You may not want to think about your personal brand (I don't), but rest assured that others will. Did you know that almost 50 percent of employers require a credit check? “A credit check is not necessarily a character check,” Bryant insists, “but it amounts to the same thing in this world we live in today.”

In an economic world, a 700 credit score will not guarantee justice, but it can change your life.

If we want to transcend the limitations of the economic story, we must know that we’re living within it, and how we can use or change it to shape our own lives rather than having our lives shaped unconsciously by forces we don’t understand. Because, again, while being broke can be temporary, it’s expensive—over the long term—to be poor. Again, Bryant speaks from his own experience, using an example of the time he was briefly homeless at eighteen years old, with a credit score hovering around 500 (not good):

I remember signing an auto finance contract to pay more than 18 percent interest to buy a car during that period. I pay 1.99 percent for a car loan today.

In that way, improving your credit score is liberating. As can homeownership. I’ve read many thoughtful critiques of why homeownership should be divorced from the American Dream. (Bethany McLean, for one, in her book Shaky Ground, lays bare some of perverse incentives and inequities inherent in the mortgage industry and US tax code.) But, according to Bryant, it’s still the “single best hedge against poverty if you are in the middle class or below.”

In other words, if you are a member of the Invisible Class, becoming a homeowner is the single best way to become “seen” in the US system of free enterprise. In one move, you become a stakeholder, a taxpayer, an engaged citizen, and more than likely you will now vote.

Hell, when America began, it was the only way you could vote. But, as with everything in this book, it’s as much about mindset as anything. It’s about investing in yourself. It is about having a wealth mindset—not to get rich per se, but to achieve independence and self-determination. There are five rules for economic independence in the book:

1. You Live in a Free Enterprise System—Embrace This.
2. Your Mindset Makes or Loses Money and Wealth—You Choose.
3. Relationships Are Investments—Build Relationship Capital With Yourself First.
4. Be Entrepreneurial—Don’t Just Get a Job.
5. Spiritual Capital Is the Start of True Wealth—Own Your Power.

We can and should hope for change that makes our economic system more equitable. We should, perhaps, begin to question and challenge the narrative of the economic story that has come to dominate all others. But the escape from economic inequality today, right now, begins within you, and it begins with understanding that story. Just as our economy relies on consumer confidence, your economic situation in life relies to a great deal on the confidence you have in yourself. Before you can begin to build wealth, you must build self-esteem. But you must also build relationships. It is what John Hope Bryant calls Relationship Capital, and it may be the single most important thing to your success. It is because he invested time and energy to building such capital that Andrew Young and Quincy Jones are today more than just colleagues of his—they’re close personal friends and mentors. How a young man from Compton, a self-described “social introvert—unless you were talking about business or life missions”—made that happen is almost comedic in how earnest and unlikely a story it is. And now, of course, those relationships have opened up even wider circles of influence, and he has served on the advisory councils of presidents in both parties to advance the goal of financial literacy.

“Relationships,” Bryant puts it pure and simple “are investments.” That might come across as crass at first, but it should be seen as an investment in a better future—together, for everyone, especially those that need the investment most, those that his organization, Operation HOPE, serves.

Bryant explains how, in his view, his real capital is his integrity. To him, it isn’t about “getting paid” or “getting rich,” but about building wealth. It wasn’t enough for him to build it in his own life—he wanted to help others and his community, in underserved communities everywhere—build it, as well. But that work to build wealth began, as it does with everyone not born with a silver spoon in the mouth, somewhere much deeper inside:

I knew that my true wealth lived within me, not in my wallet, let alone in someone else’s wallet.

And it is his mission to share that understanding, to share the memo, with everyone who is struggling economically, who feels unseen, who is hurting inside because of it:

Ultimately, this is a story about us surviving or thriving. About whether we just barely make it and accept that as good enough for us, for our children, and for our community, or whether we work together for a shared aspiration: a better life for us all.

John Hope Bryant wants us to know that there is hope, for us individually, for our families, and for our struggling communities. It doesn’t matter if they’re urban or rural, American or international, black or white or any shade in between. All we need is to get the memo. 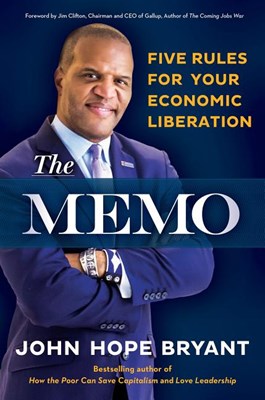