The Omega Principle: Seafood and the Quest for a Long Life and a Healthier Planet

Paul Greenberg's new book is a profound look at life on earth through the lens of a single molecule. The Omega Principle: Seafood and the Quest for a Long Life and a Healthier Planet by Paul Greenberg, Penguin Press, 304 pages, Hardcover, ISBN 9781594206344

There was a time when American commerce, and the American imagination, was largely focused on the sea. The young country’s growth in the early 1800s was tied to the economics of the sea, merchant marines for a time made up the largest wage-earning class in the country, and Herman Melville’s book about a whale, though not wildly popular when published in 1851, would become an American classic.

Paul Greenberg’s focus remains on the sea. The Omega Principle is his third book—after Four Fish and American Catch—to focus on issue of the sea, particularly on the economics at play and the environmental impact of our activity. His lens into the sea in The Omega Principle is a molecule—the omega-3 fatty acid. Most of us know it from the supplements we take, but tracing it took Greenberg all over the world and back in time.

The source of omega-3s is not, ultimately, the fish we harvest them from, but the phytoplankton that underlie the web of life in the ocean—indeed, of life on earth. These microscopic algae, Greenberg explains, not only laid “the foundation for complexity in the early eons of life on earth, but they also continue to govern the modern cycles of oxygen and carbon that influence our planet’s climate.”

So significant are these microorganisms that they function as a shadow weather system. The create half of the world’s breathable oxygen, and an equivalent amount of the world’s carbon at one time or another passes through their membranes as it does through all the land plants of the world. A single species of phytoplankton, called Prochlorococcus, is the most abundant living thing on earth.

Beyond being the ultimate source of the omega-3 in the oil we take in supplements, the fossils of ancient phytoplankton is what gives us the fossil fuel we burn in our modern world—which oddly enough, is slowly creating the conditions on Earth they formed under in the first place. It’s hard to believe, then, that we didn’t know these lifeforms existed 30 years ago, and that “the 2.5 degree increase in oceanic temperatures we’re likely to see in the next half century will reduce planktonic sources of omega-3s by as much as 25 percent.”

Greenberg provides circumstantial evidence that the introduction of seafood and omega-3s to the human diet corresponded with the evolution of agriculture and complex language, and even the advanced societies that sprang up between 10,000 and 5000 BCE in Mesopotamia, coastal New Guinea, coastal China, coastal Peru, coastal Mexico, and along the Mississippi river. The Phoenicians, forebearers of the Greek and Roman civilization, living a life based on the sea in what is now Lebanon, exported not only salted fish and its byproduct, garum (or fermented fish sauce), but the alphabet which we still use today. And Garum, which Greenberg describes as perhaps the first omega-3 supplement, was widely hailed for its health benefits in the ancient world, even as Romans looked down upon the fish it came from as food for the poor.

As Jill Santopietro writes in recent investigations of ancient fish sauces, it was common practice for Romans to have two teaspoons of garum a day, believing that such a dose contained all the essential nutrients.

It was recommended by luminaries such as Pliny the Elder and the physician Galen for its healthful properties, to address everything from sciatica, tuberculosis, migraine headaches, constipation and diarrhea. Unfortunately, as the author discovered on a fishing expedition, the anchovies that it is produced from are much harder to come by in today’s Mediterranean Sea.

It was not the only place he found fish to be more scarce, which is probably not going to surprise anyone reading this. What may surprise you is what those fish are used for:

Today, one in every four fish caught on earth is “reduced” into oil and meal and used for agriculture, land animal husbandry, and, most recently, fish farming or “aquaculture.”

Those ties, specifically to industrialized agriculture and factory farms, ties much of the book back to what we’re doing to the land and to ourselves, and to the health of both. We’ve come to rely on fertilizers because we’ve eroded the quality and health of the soil we grow commodity crops in. The only way to keep corn-fed animals healthy in confinement is to supplement their diet with the omega-3s, protein, and amino acids found in the fishmeal that the reduction industry provides. But, even as we remove fish from the ocean to feed livestock, “a meta-analysis of 196 papers on milk and 67 papers on meat showed omega-3 levels to be about 46 percent higher in grass-fed animal than in industrially raised, grain-fed animals.” Not only that, the waste from such operations releases methane that is a more potent greenhouse gas than carbon dioxide. It is a system that, simply put, is not healthy for animals, for us, or for the planet. And at its base is a reliance on commodity crops, subsidized to the tune of $15 billion annually in the United States:

The seemingly impregnable position of commodity crops in the modern food portfolio means that corn, soy, and processed wheat time and again win the battle for money from our wallets and calorific space in our stomachs. Foods like seafood and leafy greens that are lower in fats and sugars and higher in omega-3s continually lose and cost more at the supermarket.

The answer to problems of our industrialized diet seems, so far, to be more industrialization—an industrialization of the sea and its creatures, boiling them down to their chemical components and ingesting them in a pill, putting it on the land and in animal feed. And while the U.S. government currently “spends $15 billion annually propping up our current eating pattern,” based on commodity crops like corn and soy, it spends “less than $1 billion on all fisheries programs combined.” And the industrial fertilizers used to grow those crops, when washed down the Mississippi River, form a “dead zone” at the mouth of that river this time of year that exceeded eighty-seven hundred square miles in 2017—”as big as the state of New Jersey.” In addition to the fields on the Midwest, they fertilize an algae bloom in the ocean that robs all other life there of oxygen. And…

As industrial agriculture and animal feedlots spread around the globe, dead zones have been spreading exponentially with them.

Why? It surely makes a lot of money, but Greenberg wonders, “Beyond profit, is reductionism the most ecologically and environmentally efficient use for a quarter of the world’s wild fish catch?” Put very simply, the answer is no. The production cost of pigs, chickens, and cattle raised in confinement on corn is about half that of pasture-raised and -fed animals, but it also requires an incredible amount of resources that could be left in the sea to maintain the population of fish that prey on those animals—fish we do eat—not to mention the crops we feed to those land animals instead of humans. Greenberg explains:

As a recent report from the Natural Resources Defence Council notes, “If all the crop production currently allocated to animal feed were directly consumed by humans, global food production would increase by some two billion tons and food calories would increase by forty-nine percent.”

It all seems very big and systemic, because it is, and Greenberg is a great guide through the intricate interconnections and bigger picture ramifications of it all. Beyond the book’s conclusion, in which Greenberg envisions a radically different, exciting, and healthful way of growing food on land and sea, he also offers suggestions for what we can do personally to help—from getting our omega-3s from our food whenever possible, and from sustainable supplements if not, to supporting alternative energy and dam removal efforts. He even offers 11 recipes in a final chapter on “Omega in the Kitchen.”

The Omega Principle is a great journey following the story of one of the most important molecules to human health. It is very well-written, with some scenes that are so surreal that they are hard to believe, like that of the bone collectors who came in the wake of the slaughter of North American bison and turned the carcasses into fertilizer; or the ships that harvested the omega-3 rich bird guano from islands off Peru so aggressively that the crushed egg shells were used to make the mortar in the buildings of Lima; or the horrific scenes of Norwegian whalers carving steps into whale carcasses to assist in dismembering them. But it is also a history of medical research, the supplements industry, diet trends, agriculture, evolution and so much more. It is really an exploration of life on earth through the lens of a single molecule, of where life on earth came from, and a hint at and hope for its healthy future. 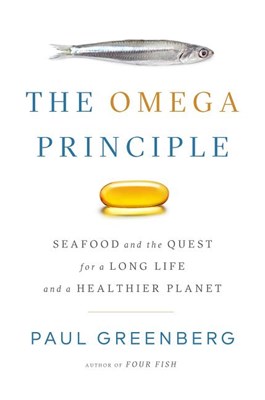 Omega Principle: Seafood and the Quest for a Long Life and a Healthier Planet