The One Device: The Secret History of the iPhone

Brian Merchant provides a full history—human, cultural, and technological—of the device that has changed the world. Steve Jobs was a visionary. He didn’t ask the world what it wanted; he showed it to us. He famously didn’t solicit consumer feedback, and even shuttered Apple’s user-testing lab upon his return to the company. But Steve Jobs did not invent the iPhone. In fact, the early user interface experiments that would ultimately lead to the iPhone were kept secret from the Apple CEO for fear he would shut them down. That user-testing lab may have been empty since Jobs’ return…

But that deserted lab would make an ideal hideaway for a small group of Apple’s more restless minds, who had quietly embarked on an experimental new project. … Their mission was vague but simple: “Explore new rich interactions.” The ENRI group, let’s call it.

It was that group of restless minds that would incubate the ideas that would lead to touchscreen phones and the future of mobile computing. Yet, even when it was finally brought out of its most secret confines in that lab and shared with Apple’s chief design officer Jony Ive—who said, “This is going to change everything”—they decided it was still best to keep it from Jobs.

It is this intimate corporate history of the iPhone—and the history of ideas and technology that preceded it—that Brian Merchant explores in his new book, The One Device. It does everything from explaining where the shatterproof screen came from, to shattering the idea that the iPhone is a product of Steve Jobs’ lone genius in the process.

Perhaps ironically, Apple—viewed as such a cool company over the last decade—had a decidedly traditional and buttoned up culture when the ENRI team began its work. There was so much Steve Jobs worship in the company, and so many Steve Jobs lookalikes amongst Apple’s predominantly middle-aged, male workforce at the time, that one member of the ENRI group didn’t even recognize the real Jobs when he was standing next to him in line at the cafeteria.

“At the time I didn’t realize it was him,” [Joshua] Strickon says. “I thought it was somebody who likes to dress like him.”

Frank Canova, Jr. never had such acolytes, but he was the man behind the first smartphone—IBM’s Simon Personal Communicator, developed in 1992, more than two decades before the iPhone. It had a touchscreen, games, a camera, and a music player (if you put in a corresponding software card), email and apps and maps. Merchant tracked him down to get his story and see that device, which has since been acquired by the Smithsonian. He goes back even further to demonstrate that the idea for something like a smartphone, a device that combines telephony and other technologies of the day, has been around since the late 1800s—very often in the satirical press that lambasted the “connected, electrified world as being full of absurdities and distractions.” One such piece, from a 1906 cartoon in the satirical magazine Punch, shows a husband and wife sitting next to each other, each on their own personal wireless telegraphy machine, the caption reading: the lady is receiving an amatory message, and the gentleman some racing results. It’s a little too prescient, perhaps.

The point is, the iPhone didn’t materialize out of the ether, and the ideas and technologies that were brought together in it have been percolating for a very long time. The first patent awarded for a mobile phone was in 1917. Even the multitouch capability the iPhone claims to have invented dates back to as early as 1972, when an almost identical technology was pioneered to run the particle accelerator at CERN in Europe—also the birthplace of the World Wide Web. The technology of touch can be traced back even earlier to the development of synthesizers like the Moog, which brings out a main theme running through the book:

Apple made multitouch flow, but they didn’t create it. And here’s why that matters: Collectives, teams, multiple inventors, build on a shared history. That’s how a core, universally adopted technology emerges—in this case, by way of boundary pushing musical experimenters; smart, innovative engineers with eyes for efficiency; idealistic, education-obsessed CEOs; and resourceful scientists intent on creating a way to transcend their own injuries.

The education-obsessed CEO and resourceful scientist are great stories in their own right, and this is all just to explain how Apple’s multitouch screen came to be. The story of its shatterproof screen has a more direct lineage to Corning, the company that invented it in the early 1960s. Merchant’s history of the iPhone also includes a history of the camera, the gyroscope, GPS, the accelerometer, magnetometer, and transistor, and wireless networks—most of which go back over a century—and much, much more.

But the book is more than just a history of ideas and technology. It is a history of the physical object as well—of the minerals and materials that go into it and the people that put it together. As the author says:

The book follows these dual threads, the history of the idea and the physical journey of materials that end up in the iPhone. He visits mines in Bolivia, lithium mines in Chile, and sneaks into a Foxconn factory—a city, really—in China. He walks the streets of Paris with a fashion photographer using an iPhone, and goes to Nairobi to delve into the app economy that has blossomed there. You’ll learn the entire production process along the way, and the history behind the various technologies that go into your phone. And here, the story is similarly rooted in history.

For instance, about half of the tin mined in the world today ends up in our electronics in the form of solder, and that tin is mined in places like Cerro Rico, “The Mountain That Eats Men,” in Potosí, Bolivia. The mountain that eats men has been in continuous operation since the mid-1500s—when it filled the Spanish Empire’s coffers with silver—and it eats children, too, because “thousands of children, some as young as six years old” work in those mines. (It’s not just workers in developing countries losing lives, either. OSHA declared tower climbing, the job done by so many to maintain our cellular networks, “the most dangerous job in America” in 2008.) The approximately 15,000 miners that work in Cerro Rico do so on a freelance basis, working in the same way they have for hundreds of years, with pickaxes and dynamite in loose-knit cooperatives:

So … metal mined by men and children wielding the most primitive of tools in one of the world’s largest and oldest continuously running mines—the same mines that bankrolled the sixteenth century’s richest empire—winds up inside one of today’s most cutting-edge devices. Which bankrolls one of the world’s richest companies.

As they say, history may not repeat itself, but it rhymes. To Apple’s credit, they have fully mapped their supply chain and, since 2014, have made Supplier Responsibility reports available to the public, which is how we know they use tin from Cerro Rico.

Tin is just one of many mined materials in the phone. Merchant brings in a mining consultant to crush an iPhone and determine its chemical composition. The breakdown of materials and explanation of them is in-depth and intense, and comes to the startling conclusion that “producing a single iPhone requires mining 34 kilos (75 pounds) of ore, 100 liters (26 gallons) of water, and 20.5 grams of cyanide, per industry average.” Later in the book, we learn about the afterlife of the device, and where all the e-waste ends up, which may be just as startling.

Back to the story of the ENRI team, we learn that when Jony Ive finally took Steve Jobs to the multitouch rig they had constructed in the user-testing facility:

“He was completely unimpressed,” Ive said. “He didn’t see that there was any value to the idea.”

Jobs would change his mind after mulling it over for a few days, and eventually came to love the idea so much that he claimed it as his own. But it wasn’t. Nor was the idea to make a phone at Apple. It took Apple veteran Mike Bell and a late-night phone call on November 7, 2004 to convince Jobs to do it. Putting those two ideas together, though, is what ultimately changed the game. But it wasn’t easy.

There were culture clashes between the team that created the prototypes and the more staid company atmosphere at Apple. One member of the team stopped going to meetings with Steve Jobs because they were so demoralizing. Pay was low because Apple still hadn’t recovered from its financial woes, and it was so hard to get the very Macs they worked on free of bugs and malfunctions that two members of the ENRI team actually built their own Windows PC to work on. They also hacked the entire user interface together using Adobe’s Photoshop and Director. And all of that was in the early days, which would only be a precursor to the politics and drama that would occur when Jobs fully embraced the project and pushed it forward, getting other top executives involved.

Eventually, the executives overseeing the most important elements of the iPhone—software, hardware, and industrial design—would barely be able to tolerate sitting in the same room together.

And the designers, engineers, and coders working beneath them would work practically around the clock for years to bring the original iPhone to the market, to the detriment of their families and often their health. And the work they did built on the work of so many that came before them. Showing that work in all its depth and breadth is, I think, the greatest achievement of the book, which was Merchant’s goal:

My goal is that by the end of this book, you’ll glance into the black mirror of your iPhone and see, not the face of Steve Jobs, but a group picture of its myriad creators—and have more of a nuanced, true, and, I think, compelling portrait of the one device that pulled us all into its future.

In the end, he does it. After exploring the brine fields in the mountains of Chile, the wireless visions of Nikola Tesla, the history of iOS, and so many other pieces of the story that span the globe and centuries in the process, you realize The One Device is as much about the evolution of ideas and human interconnectedness and interdependence as it is about the iPhone. 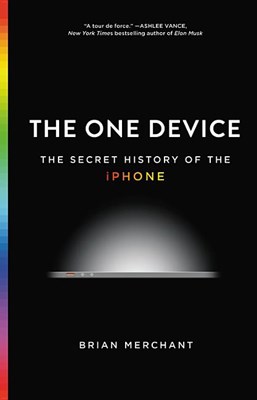 One Device: The Secret History of the iPhone