John Maynard Keynes stared down two world wars and the Great Depression, and in response offered hope and optimism to the world through sound economic policy. 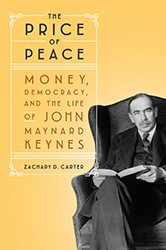 The Price of Peace: Money, Democracy, and the Life of John Maynard Keynes by Zachary D. Carter, Random House

The best art and thought happens in both moments of individual creativity and in movements of like minds—the Renaissance, Impressionism, and Cubism, the Harlem Renaissance and Magical Realism, Empiricism and Existentialism. All are defined by the associations among individuals as they are by individual works or ideas. One of the smaller movements that has most intrigued me over the years is the Bloomsbury Group, a group of intellectuals, friends, and lovers that included writers Virginia Woolf and E.M. Forester, painter Duncan Grant, and—perhaps the most unexpected member, and my personal favorite of the group—economist John Maynard Keynes. As Zachary D. Carter writes in his new book on Keynes:

Through Bloomsbury, Keynes joined an international community of progressive intellectuals who believed themselves to be breaking down the crude medieval barriers between peoples through the power of love and beauty.

The onset of World War I, Carter tells us, “shattered that collective illusion.” Keynes served in Her Majesty’s Treasury during the war, and was the financial representative for the Treasury to the Versailles peace conference that ended it. Keynes was disillusioned by his experience at the conference, which led him to write The Economic Consequences of Peace—an accurate prediction that the severe reparations imposed on Germany by the Treaty of Versailles would lead the country to economic instability and ruin and drag Europe back into war. It turned into a surprise international bestseller, but also got him booted from the good graces of his own government.

Three years later he found himself in Genoa working as a reporter at the first meeting of the two sides since the war ended (while also working his way back into the good graces of government officials), where there was as much wrangling between the allies that won the war as there was between them and Germany. Most specifically, France and Great Britain were demanding the new Soviet government in Russia repay loans they had made to the tsarist regime during the war, even as a famine was ravaging that country that “would eventually claim five million lives.”

“The conference,” Carter writes, then “descended into a referendum on socialism” even with “violent ultranationalist movements rising across the continent.” He relays what Keynes wrote in response to the conference’s turn toward such debate:

“Many apprehend the issue of the near future as between the forces of Bolshevism and those of the bourgeois states of the nineteenth-century type,” Keynes wrote from Genoa. “I do not agree. The real struggle of today … is between that view of the world, termed liberalism or radicalism, for which the primary object of government and of foreign policy is peace, freedom of trade and intercourse, and economic health, and that other view, militarist, or, rather, diplomatic, which thinks in terms of power, prestige, national or personal glory, the imposition of culture, and hereditary or racial prejudice.”

Within two years of that writing, Adolf Hitler would attempt a failed coup in Germany and Mussolini would lead a successful one in Italy. Fascism was on the move. But so was Keynes, who would release A Tract on Monetary Reform in 1923. His most influential book, The General Theory of Employment, Interest and Money, would arrive in 1936, three years after Hitler rose to power. But it was also three years after FDR was elected president of the United States, who was already implementing Keynes’ ideas to establish a New Deal to lead America through the Great Depression, win World War II, and lay the groundwork for widespread (even if not perfectly spread) prosperity for generations to come. And so it was that Keynes’ ideas, not those of the fascists, would win out and provide the backbone of a new world order and economy in the 20th century. In one of the greatest, but now largely forgotten, what-ifs in history:

In 1934, a bond broker named Gerald McGuire approached retired Marine general Smedley Butler about leading a coup d’etat against FDR, backed by $6 million to install a Fascist regime modeled on that of Benito Mussolini. The scheme had collapsed when Butler reported it to a congressional committee.

We shouldn’t be too surprised by such an attempt. What FDR was doing was a dramatic reshaping of society. Despite the scholarly and seemingly conservative titles of Keynes’ books, they contained radical ideas that would upend and fundamentally change the nature of capitalism. And as the Soviet Union slid into authoritarianism, and a Cold War raged, the policy tools Keynes offered were used to build economies in the so-called Western World that outlasted even that great economic struggle—with greater individual and civil liberties and far fewer economic panics and catastrophic disruptions along the way. Academic and political battles continued to rage around the Keynesian policy of full employment and tools like deficit spending, with McCarthyism being the biggest backlash, for the entirety of the 20th century, but they largely guided the economic policy of every administration throughout it. Carter proposes that it was during the administration of Bill Clinton at the end of the century—during which a neoliberal faith in financial markets was finally unleashed in full force—that the Age of Keynes finally ended.

We returned to Keynes' ideas and tools to rescue the economy after neoliberalized financial firms blew themselves up and crashed the financial system in 2007 and 2008, but they were not fully embraced nor sustained. Europe quickly turned back to instituting austerity measures and the US Senate refused to pass President Obama’s $447 billion jobs bill.

Today, we are again witnessing an argument among policy makers, like Keynes had in 1922, over socialism in a time of great economic upheaval, even as authoritarianism is once again on the rise across the globe. Democracy spread and prosperity was shared. These seem to be dark days again for Democracy, but Carter ends on a note of optimism, highlighting the efforts of optimists who are once again working on altering an economic arrangement that has resulted in a Second Gilded Age. At a time when a disease has laid bare the inequities and inequalities in our society, it is optimism that makes us believe in and fight for a more equitable and fair society. It is optimism that gives us the belief that not only can we afford to enact a Green New Deal and rebuild our infrastructure, that we can address climate change, but that we can’t afford not to. It is optimism that has us pondering what comes next after neoliberalism, and has been seen in at least a part of our response to the current pandemic. It is optimism we desperately need today. And as Carter writes, it is found in Keynes:

These optimists may succeed, and they may fail. But they are pursuing a vision that sustained Keynes through three world crises and demonstrated beyond any doubt that a better world was possible on the other side. Keynesianism in this purest, simplest form is not so much a school of economic thought as a spirit of radical optimism, unjustified by most of human history and extremely difficult to conjure up precisely when it is most needed: during the depths of a depression or amidst the fevers of war.

Yet such optimism is a vital and necessary element of everyday life. It is the spirit that propels us to go on living in the face of unavoidable suffering, that compels us to fall in love when our hearts have been broken, and that gives us the courage to bring children into the world, believing that even in times such as these we are surrounded by enough beauty to fill lifetime after lifetime.

Keynes stared down two world wars and the Great Depression, and in response offered hope and optimism to the world through sound economic policy. They were policies that provided international stability by alleviating domestic economic inequality, and they largely worked. There is an optimism and beauty found in the arts, in the moments of creativity and movements of like minds that have shaped art history. It is an optimism and beauty also found in the clarity of one man’s mind almost exactly a century ago—one drawn toward the arts and artists, but who made his creative mark on the world through economics. Zachary D. Carter's book on the man is beautiful and brilliant. Here’s hoping that optimism succeeds again. 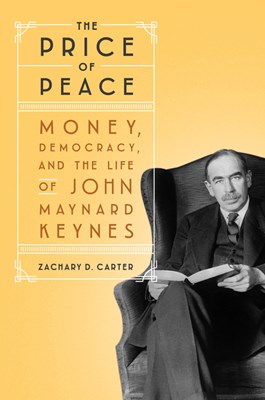