The Right Kind of Crazy: A True Story of Teamwork, Leadership, and High-Stakes Innovation

Adam Steltzner takes readers on fascinating leadership journey that ends with landing a the Curiosity rover on Mars. 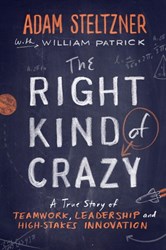 You probably think your job is hard, and I’m sure you’re right. Whether you love your job or not, there’s pressure and stress inherent in any work.

But step back and consider the task Adam Steltzner took on when he took the lead of the Entry, Descent, and Landing (EDL) team of NASA’s Curiosity rover:

The assignment we took on … sounded straightforward enough: Design a way to deliver a 5,359 pound entry vehicle, which carries a 1,982 pound rover called Curiosity, into the Martian atmosphere without harm, then slow it down, guide it to the landing site, and put it down on the surface, safe and sound.

The whole world, literally, was watching. And, success or failure, Steltzner was the one responsible for the most highly visible aspect of the journey—its landing. Stress is stress, and pressure is pressure, of course. Our stress levels and sense of responsibility are probably about the same in any job, but the biggest project I lead every year is a review of the year’s best business books. Adam Seltzner was responsible for a ten-year mission that is a “virtual extension of ourselves into space.” It is propelling humankind into the heavens, exploring the universe, and looking to answer some of the fundamental questions about our very existence.

The stress and pressure of his job was to lead a team that accurately determined the stress and pressure the spacecraft itself would come under in the atmosphere of Mars, and engineer a solution to deliver delicate scientific instruments to its surface. And the due date on this project was rather specific, as it was determined by the gravitational pull of celestial objects in our solar system.

The name of that rover they were to put on the surface was Curiosity, which is entirely fitting because Steltzner credits curiosity itself with changing his life. It is curiosity that propelled him from working in a health food store and dreaming of becoming a rock star after barely graduating high school, to engineering a landing on Mars.

The book is a first-person account of managing the EDL team, but I’d say it also very much a memoir—and a fascinating one at that. Steltzner has a great storytellinbg ability, whether it’s of his family history, his days taking crazy risks and breaking bones in his younger years to escape the fear he saw in his father that he didn’t want to inherit, or how curiosity pushed him out of his own restlessness after high school while spotting a constellation he recognized while driving up and down Highway 101 for his band’s gig. Watching its path through the sky sparked a curiosity in him that led him to sign up for a course at a community college, and took him on an academic journey that eventually led him to Caltech and the Jet Propulsion Laboratory—a very established institution now, but one with a decidedly anti-establishment beginning that retains a freewheeling spirit Steltzner is clearly passionate about.

I don’t usually love memoir-style business books. But Steltzner makes his work wonderfully for two reasons. The first is that his journey is so unusual and inspiring in its own right. The second is how well he embeds the lessons learned in his life into that story so effectively. He speaks of how he learned patience as a headstrong young employee. Writing of how he lept from worker bee analyst crunching data at JPL to his first leadership role on the Champollion mission—an attempt to link up a spaceship to a comet by driving a spike in it—Steltezner offers great advice on the mix of humility and assertiveness needed to lead. To set the scene, he tells us how he got on the team because, at the time, he was doing rote analytical work for the lab, but spending his summers doing doctoral work at the University of Wisconsin where he was “doing some plasticity theory work,” which he thought could help the project. Looking at the problem the team was having and seeing a vacuum of leadership on the technical leadership of the mission, he explains what happened next and what he learned from it:

I then did something I had never before, an act that perhaps more than any other changed my career and perhaps my life. I stood back and allowed myself to look at the whole problem of anchoring to a comet. I then broke the problem up into the pieces that seemed logical and useful … And then I, the dweeb from 354, opened my mouth and told Chris and Randy, the comet stabbers from 352, what I thought.

I started from the perspective that I was definitely not the boss or anything like it but, rather, that I had thought about our problem and broken it up into pieces that we could analyze, the pieces we needed to test, and the data we needed to get out of our testing. I shared my reasoning with them, and they agreed to follow the plan of work I had proposed. The lab has a long-standing tradition of yielding to the strengths of arguments, but this was the first time I had stepped up and offered my arguments for consideration.

When the person in change of the study saw the plan, he immediately put Adam Steltzner officially in charge. What he learned is that “you have to rise to the performance level of the job you want to have, which means you have to just freakin’ do the job.” But that’s just the assertive aspect of it. What he also learned was:

If you come in acting like the boss, bossing people around in order to feel powerful, the most common response is going to be “Who the fuck are you?” So the trick is to exhibit leadership—lead—without having to claim leadership or to subjugate others. This is leadership really as a service function, as a gift to the group.

I used to think of leadership as the sign of power. At JPL I learned it is also a sign of service.

It was then that he learned that when engaged with a problem or engaged in conflict, to be creative and “search for a truth that lets ideas win, not people.”

The rest of the book is a chronicling of successive projects he was involved in, and his succession up the ranks at JPL, culminating in the successful jubilation of the landing of the Curiosity rover. There is a third reason this personal story works so well that I didn’t mention above: rather than discussing the manufacture of widgets or launch of products, he’s telling stories about landing spacecraft on other celestial bodies and the launch of rockets! And in the midst of that fabulous entertainment, he drops nuggets of leadership wisdom everywhere. Telling us how he landed a job on the Mars rover, he writes:

Not wanting to be held hostage to talent that might walk out the door, most organizations chafe at the idea that people are unique and that any one person’s contribution might be crucial. Institutions want to believe that policy and process, not individual belly buttons, determine the quality of their product. Thankfully, JPL, more than most, accepts that policy and process without the right people is a losing proposition. I think [the person in charge of the mechanical engineering for the project] knew this, and I think he decided to deploy a different human tool (me) when the new and different challenges facing MER became evident.

Discussing ways he got things wrong in the early days, he talks about how some people on the team struggled to find their place within it, and rather than open one up for them, he probably did more to shut them down:

We suffered through it and made it over the finish line together, but I know I made those people less productive than they could have been. A leader has to strike the cultural chord of the team, but you can’t make everything a monotone. You have to invite the coexistence of differing styles and do your best to make the culture open to different ways of getting the job done. I still struggle with this a little today, but back then I knew only one tune, and I played it very loudly.

It is in these admissions of mistakes in his role, of sometime overstepping, of inadvertently overshadowing a close friend and colleague, that he tempers the overconfidence that you might expect of someone writing about leading a team that landed a spacecraft of Mars with the mistakes he made and lessons in “temperance and moderation” he learned along the way. But through it all, he always comes back to the power of curiosity, and coming up with solutions that are “the right kind of crazy.”

We humans are a curious species. Born through hips too narrow to pass skull large enough to hold a fully formed human brain, we are born half-naked. Compared with those of other animals, very few of our behaviors are hardwired. We don’t inherit genetic instructions for nest building, for instance, or for migrating south when the sun hits a certain angle in the sky. We come into this world programmed with few instructions, save for one permanent piece of code: Be curious.

People don’t necessarily have to be incentivized with stick options and mega-salaries for curiosity-driven creativity to occur. The only essential ingredient is a work environment that’s structured to encourage our innate drive to wonder, question, and explore.

So go out and build that work environment, even if you can only do it for yourself. What you are building may appear a little crazy at first, like building a “sky crane” to land a small vehicle on another planet did to Steltzner’s superiors, but if you keep working at it, never accept the first solution as the only solution, and “hold on to the doubt” until you feel you’ve arrived at a deeper truth, then you may just find the right kind of crazy.