The Spark and the Grind: Ignite the Power of Disciplined Creativity

Erik Wahl's new book is sure to create sparks of an idea and inspiration to follow it, as well as teaching you how to grind them out and keep creating more. Our relationship with our own, innate creativity is like any other relationship. It requires attention and occasional adjustments to new realities to survive and remain healthy. We can blame the schools for not promoting it, or the corporate environs we inhabit for its fading luster, or the fact that it hasn’t done anything for us lately for our own neglect in the relationship, and all are to some extent true.

Erik Wahl, in his new book, The Spark and the Grind, acknowledges as much:

Traditional schooling and typical corporate protocol have taught you that creativity isn’t as important as finding the correct answer or following the correct strategy (as if there is always just one). As a result, your relationship with creativity takes real work today. And that’s where the relationship stalls—even ends—for many of us.

But I think, as much as our industrial age education system or corporate hierarchy beats it out of us, so does our own adaptation and understanding of the world around us. It is a trickier reality Wahl identifies succinctly near the end of the book:

The smarter you are, the harder it is to see, understand, and create something new.

The creativity we’re all born with fades as the mystery fades, as we begin to know and think we understand the world and our place in it. It is similar to how the magic fades from a romantic relationship as we get to know our spouses better and begin to fall into patterns of preconceived understanding rather than being present in an ever-changing reality with them. Our relationship to creativity has been neglected as we grow older because our curiosity about the world fades and our need to display competency takes over. At school and at work, knowing the right answer is important, and the answer is assumed to be knowable. You learn the facts to be able to recite them. There are rules that need to be followed if you want to get the best grade, the desired promotion, or the right appointment.

Creativity, on the other hand, involves bringing something new into the world, something that can’t be known because it doesn’t exist. That this requires hard work doesn’t feel as exciting as it being a flash of inspiration or insight—a spark that provides us a ready-made solution. And hard work alone doesn’t guarantee success, either. The most creative people know how to move back and forth between these two modes: stepping back to see the bigger picture with fresh eyes, and leaning in to execute and get things done. They are able to easily take on new information, change directions, and even abandon their original idea for a better one, but they are also able to “ship,” to bring their ideas into the world.

As a result, they not only make things happen, they make great things.

What Wahl reveals is that creativity can become a core competency—if you don’t let your previous notions of competency get in the way. And to do that, we have to stop splitting our creative side from our doing side—the ability to spark new ideas with the ability to grind them out. Most people tend to have a natural tendency toward one or the other, and while “idea people” are often viewed as the most creative, Wahl reminds us:

The final measure of creativity, innovation, and revolution is neither ideas nor dreams. It’s whether those sparks grow into something that matters. Martin Luther King Jr. had a dream. He went about stoking it into a blaze that cleansed our nation. Would the spark have ignited as it did if King had only given a single speech?

People who chase the spark but don’t embrace the grind are into igniting big ideas but not fanning them into a tangible blaze.

But, even if it did guarantee success, the grind isn’t enough to even simply satisfy us either. “The grind without the spark,” says Wahl, “is what we feel when we say work is a grind.”

It’s not enough to grind only for money or position or prominence. These results have diminishing returns. You burn out.

The perfect example of a Grinder is Nolan Bushnell, cocreator of Atari and Chuck E. Cheese, who was so focused on those companies' endgoals that he passed on the idea of the home computer along the way, pitched to him by two guys he had hired to develop the Atari game Breakout, Steve Jobs and Steve Wozniak. He eventually sold Atari to Time Warner for $28 million, but could have made billions from the idea he passed on. He also funded a computer animation project called Kadabrascope, which he sold off to focus on Chuck E. Cheese, which he would eventually let go of for “maybe $35 million.” A nice haul, perhaps even a legacy…

But then again, the Cheese is no Pixar, which is what Bushnell’s hasty sell-off, Kabadrascope, would become under its new owner, George Lucas.

And that was after Steve Jobs offered him a third of the company they were now calling Apple for $50,000.

Of course, there aren’t any great examples of Igniters that aren’t Grinders, because their ideas don’t ever make it into the world. An Igniter “possesses the [ability] to discover good ideas anywhere, but he lacks the fervor to craft those discoveries into something tangible, let alone viable.”

Among those that have struck the right balance, you’ll read of an NBA star and neuropathologist, independence leaders and a social media strategist, a ghost writer and the street painter that inspired his work, among countless other artists across a wide range of artistic disciplines. He intersperses the story of his own journey, and struggle, throughout to underpin it all with a more intimate understanding.

Erik Wahl is known mostly as an artist and inspirational speaker these days, so you would assume he’s always been more Igniter than Grinder, but he spent the eight years prior to the dot-com bust doing the corporate grind in sales, lining up speakers with organizations. And he worked harder and longer than anyone—more so as the economy tanked and customers stopped spending money and stopped calling. It was a crisis that led him back to a renewed, reinvigorated and healthier relationship to his own creativity. And the lessons he found there were timeless:

I’m far more interested in what has always worked—regardless of era, fashion, or cultural context—than in the latest hack that works today but may be cliché tomorrow.

He does believe in practice, and practices. And he has seven of them: Trust the Process, Attach Yourself to the Work, Keep Your Day Job, Embrace a Routine, Defamiliarize the Ordinary, Stay Foolish, and Fall in Love. Some of them seem contradictory at times. Sometimes there seem to be contradictions within the chapters dedicated to each practice. But that is a part of the process, too, the ability to hold separate, complex, even contradictory ideas in your head at the same time without letting them drown each other out. To be focused on the end goal as a Grinder, but open to ambiguity and new experiences as an Igniter along the way is, in fact, contradictory in most people. Because of that, the practices he suggests may be harder to put it to place, but they are more useful because they can be applied to a whole life rather than just one situation. In explaining how to “Trust the Process” for example, he offers this:

Most of us realize that creativity is going to be a vital ingredient to our success in increasingly complicated years ahead. Like creating a spark to ignite a campfire, it helps if we have some tools to build that flame with. Erik Wahl's new book is sure to create sparks of an idea and inspiration to follow it, as well as teaching you how to grind them out, keep creating more, and bring them into the world. 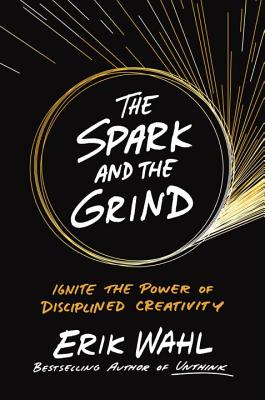 The Spark and the Grind: Ignite the Power of Disciplined Creativity