"From the best-selling author of Saving Capitalism and The Common Good, an urgent analysis of how the "rigged" systems of American politics and power operate, how this status quo came to be, and how average citizens can enact change." 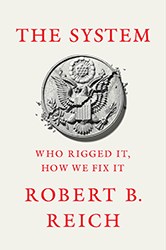 The System: Who Rigged It, How We Fix It by Robert B. Reich, Knopf

3.3 million people filed for unemployment last week. To put that in perspective, claims during the Great Recession peaked at 665,000 in March of 2009, and the previous high was 695,000 at the end of the recession of the early 1980s. The number of claims is likely to grow exponentially this week as the economy is put into what amounts to a medically induced coma, more companies are forced to shutter, and freelancers and gig workers are able to file for unemployment for the first time.

It would be a good time to put politics aside and focus on what needs to be done to save people’s lives and the economy, but the decisions that need to be made are, by their nature and how they have to be executed, political. But, of course, the personal is political—and vice versa.

For instance, did you know that, under bankruptcy law, you are allowed to modify a mortgage on a vacation home or investment property, but that you cannot do so on your primary residence? Which means that, by law, it is easier for the super-wealthy to keep a second or third home than it is for most people to keep the home they live in. There was a proposal to let bankruptcy judges restructure regular home mortgages during the Great Recession, but the banking industry opposed it, and more than 10 million people lost their homes during the crisis as the industry itself was bailed out by taxpayers. Not only did the wealthy do just fine, Aaron Glantz’s Homewreckers makes clear how they increased their wealth and power in the process—many of them ending up in the current administration. As Robert Reich explains:

Bankruptcy is a part of the free market, but like all other aspects of the market, its rules are determined through politics, and over the last four decades Wall Street has become far more powerful than Main Street. That’s why the biggest banks got bailed out and didn’t have to use bankruptcy, while homeowners did not get bailed out and were not allowed to use bankruptcy. Recall that there is no free market separate from the government. Government sets the rules of the game. The issue is who has the most influence over those rules. In the era of oligarchy, the rules are being set by those at the top.

Do you know who was a socialist? Emil Seidel, the first in a line of socialist mayors in Milwaukee who would lead city hall here for a half a century. Those years under socialist administration would be the most prosperous for Milwaukee’s businesses and citizens, which belies the fear mongering about the dangers of socialism we hear from politicians on both sides of the aisle today. Perhaps more pointedly today, as local historian John Gurda recently wrote, under the leadership of its “sewer socialists,” Milwaukee's handling of the Spanish flu epidemic of 1918 has public health lessons for the coronavirus outbreak.

Please understand, I am not a socialist. I am not an “ist” of any sort, other than (hopefully) a pragmatist. What I am is part of the system. You are a part of the system. The super-wealthy are a part of the system. And returning to one very important word in the earlier quote from Robert Reich, what that system is now—in very real terms—is an oligarchy. It is nor the first time we have had one in America. The example of the original Gilded Age is the most apparent and most referenced, but the country was also founded by one:

Many of the men who founded America were slaveholding white oligarchs. The nation did not have much of a middle class. Most whites were farmers, indentured servants, farmhands, traders, day laborers, and artisans. A fifth of the population was black, almost all of them [enslaved].

They were also men of The Age of Enlightenment, and set up a system of self-government that the country’s citizens eventually put to use to extend more political freedom and economic security to large swaths of the American population. It was an imperfect progress, but one that led the nation’s greatest advocate for its most oppressed populations to believe that “the arc of the moral universe is long, but it bends toward justice.” Reich explains in the book how the playing field has tilted back in the favor of moneyed interests, but of course, we can see it all around us. We can see it in the current administration. We can see it in how, even in the midst of an epidemic, manufacturers are bidding up the cost of personal protective equipment to the point that health care providers used to “pay about 30 cents for an N95 mask but [are] now seeing prices between $3 and $15 per mask.” We can see it in the fact that, while nearly every industry is taking a massive financial hit, and you’d expect the health insurance industry to take one of the biggest as they pay out claims, they are still raking in record profits, and their stock prices have risen dramatically in the expectation that they will continue to do so. We can see it, as Reich notes, in the subsidies handed out to special interests:

The reason the American oil industry gets $2.5 billion a year from the government in special benefits, including the right to drill for oil on public lands and take private lands for oil pipelines, has nothing to do with the public’s interest in obtaining more oil. It is because Big Oil spends some $150 million a year backing pliant politicians. That $2.5 billion worth of government benefits is a remarkably good return on investment.

It shows how “not even a sizzling economy can deliver anything close to the returns on political investments,” and how an economy that is at a complete standstill can still deliver for some. So what is the problem?

And yet, we know that the banks are built not on the brick and mortar of Wall Street, but on the backs of working people who put their money into them. One thing we’re likely to see as a result of the shutdown of the economy is the further automation of banking—a trend you can learn more about in The Autonomous Revolution. But, as we’ve learned over the past two weeks, there are a whole lot of lower paid workers, many working at minimum wage, that are absolutely essential to the economy. They are stocking shelves and delivering supplies and cleaning spaces literally deemed essential by our government. In light of that, consider this:

Wall Street’s yearly bonus pool … in 2018 came to $27.5 billion. That sum, not incidentally, is more than three times the combined incomes of the approximately 600,000 Americans employed full time at the minimum wage.

There is a great deal of hope in that realization, because it suggests that—as with the current supply of ventilators in this country—we don’t necessarily have a supply problem, but a distribution problem. Our economic system itself is on life support, but we can and will resuscitate it. And as we do, we can rewrite the rules to be once again in the favor of the vast majority of people. Look to the example of Sara Nelson, International President of the Association of Flight Attendants, who worked tirelessly to make sure the stimulus package passed by Congress today favored working people as it bailed out her industry.

And the oligarchy can actually help. Thomas Jefferson wrote extensively about the evils of slavery in his Notes on Virginia, even as he himself was a slaveowner, even as he fathered children with one of the human beings he enslaved. He also wrote the Declaration of Independence that declared “all [humans] are created equal.” He was undoubtedly aware of his own hypocrisy, but economic self-interest and ideals are not always easy bedfellows. What we need now is for the oligarchy, so many of whom are liberal and social-justice minded, to put aside some of the self interest in the interest of social justice, to give up some of their power, and to do so not only in writing, but in action.