In his new book Steven Goldstein encourages the reader to appreciate the “power in popularity,” that “likeability is leverage,” and explores how businesspeople, politicians, and entertainers wield it. 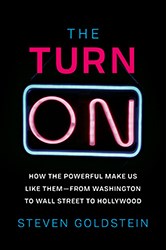 The Turn-On: How the Powerful Make Us Like Them-from Washington to Wall Street to Hollywood by Steven Goldstein, Harper Business

Steven Goldstein has worked close to the centers of power since early in his career, first as a staff lawyer for Chuck Schumer, and then as a producer on The Oprah Winfrey Show. While those jobs sound very different on paper, he explains that they were nearly identical—requiring him to find likeable individuals with compelling stories to testify, or be interviewed, that would evoke an emotional response to influence others. He had always, in both jobs, as he says, “an activist’s agenda” to persuade people on the issues that mattered most to him.

Next, he founded his own organization, Garden State Equality, to fight for (and win) marriage equality in New Jersey, and then built it out into a national organization advocating for the same rights across the country. In that role, he became the storyteller, appearing in the press himself on an almost daily basis to advance the cause (though he was played by Steve Carrell in the movie that chronicled the organization’s success, a movie with its own likability issues, as he explains later in the book), but he still relied on finding others’ stories to tell to do so.

The book is about the traits of likeability that allow those in positions of power in politics, entertainment, and business to best wield their influence. And while he focuses on public figures to teach these traits, they are also obviously available in our private lives as well, which he explains at the end of the book but is an undercurrent of the entire book if you read it for that reason. He began his list of likeability traits as a Congressional staffer needing compelling testimony, and then refined it as a professor of law and political science at Rutgers University in Newark teaching a class on Campaigns and Elections. The list blossomed over the years, but he boils it down to eight traits for the book:

Taken together, they make up what he calls “CHARPRPC.” Just joking; this is not that kind of book. These traits build upon one another. You can’t have hope without being captivated, or relate to someone you don’t believe is being authentic. He also breaks each trait down “into a formula of subtraits”—three for each primary trait—to explain how, for instance, passion, presence, and erudition build up to captivation. Not all are necessary—“Captivation isn’t always smart, but smart is always captivating,” he says.

He calls it “likeability literacy,” and encourages the reader to appreciate the “power in popularity,” that “likeability is leverage.” Like it or not, “society has judged, and will continue to judge, public figures by their likeability.” But it is also a construct that can be and is manufactured—an entire industry in its own right. It is the business Goldstein is in, and lets you in on in The Turn-On, explaining how the industry works and who the major figures are. That includes many businesses, but he breaks them down into three main functions: The Trainer, The Evaluator, and The Presenter.

The Trainer is exemplified by Magid, a company in Marion, Iowa founded by a professor of social psychology, Frank Magid, and now run by his son. Magid taught in Cedar Rapids, and started the company to help on-air talent at local newscasters become more likable, which he did so successfully that he would ultimately develop Good Morning America for ABC. The company is now a go-to for media personalities and others hoping to project likeability and the joy of performance. The Evaluator is Q Score and Celebrity DBI that help companies decide which celebrities to hire to endorse their products. The Presenter is the behind-the-scenes speechwriter or screenwriter that prepares the message, or the press secretary, publicist, agent, or manager that delivers it to the public.

If there is one word to describe the book, I think it would be demystifying. Goldstein explains how, when Ellen DeGeneres took a selfie with some of the world’s most famous actors in the front row at the 2014 Academy Awards, what seemed to be a spontaneous event was in fact a very deliberately staged, incredibly lucrative product placement advertising for the Samsung Galaxy smartphone that was used to take the photo, a phone she gave away to her entire talk show audience the following day. The company claimed afterward the viral photo had indeed happened organically, a claim belied by all of Ellen’s other photos posted to Twitter that night, marked “Twitter for iPhone.”

Using Ellen’s likability as a construct to push phones is not any different than using any particular politician’s likability to push public policy. When people are able to relate to you, it gives them reassurance. And, as the story of a Shreveport weatherman relates, that doesn’t mean being phony, it means being more authentically yourself in front of others—in his case, simply on camera.

Goldstein shares the story of his work for Senator Frank Lautenberg who, while funny and passionate in private, had always presented himself with a “public formality rooted in a sense of respect for the institution.” In an effort to get the press’s attention, Goldstein shortened the the Senator’s formal lengthy press releases laden with details that reporters never actually read and began releasing what he called “scream sheets” with large headlines and a brief story underneath. He also taught Lautenberg “how to craft and deliver a sound bite,” which he quickly mastered. Always a master of passing legislation, the Senator became a more poignant messenger, constantly in the news after Goldstein’s attention grabbing tactics, and his approval ratings soared. We can (and I do) decry our sound bite, tweet-length culture, but we can also learn to use it to convey a cogent message with real substance behind it. Because the fact of the matter is that you can’t get to the substance if you can’t get people’s attention.

There is a trace of braggadocio in touting such successes, but the book would be worse off without them. It can feel a little slimy to read how public figures’ personas are manufactured, but it also requires thoughtful examination and perceptiveness, which he applies to the “nearly three hundred stars in politics, business, and entertainment” he profiles. The examples come at a quick, constant, and delightfully quirky juxtaposed pace. He compares J. Lo’s song “Jenny from the Block” to Microsoft CEO’s book Hit Refresh: The Quest to Rediscover Microsoft’s Soul and Imagine a Better Future for Everyone in how they are both about staying true to one’s origins—a subtrait of public authenticy.

There is, of course, a profound dark side to all of this. It is not only used to manipulate, but the consideration of public likability forces us to consider our society’s prejudices. Anand Giridharadas’s Winners Take All exposed how the elite burnish their image while protecting and extending their own power and the system that perpetuates it. Goldstein does the same, without as critical a lens—simply showing you how it is done. Perhaps that daylight will be enough of a disinfectant for the less savory ways people use it by allowing us to see it for what it is. He also discusses at length the double standards of likeability applied to women, people of color, and the LGBTQ community, showing us how “prejudice is rooted in the likability prism.” He asks us to consider the anger and uncontrolled rage men like Alec Baldwin and Brett Kavanaugh have expressed in public settings, and then imagine what would have happened to their long term likability and ability to stay in their fields if they were African American. The point is that there is a double standard applied to expressing anger:

If white men were killed at a disproportionately higher rate, and white people marched in the streets bringing attention to the issue, they would be seen as protective. Never would they be called radicals seeking to undermine social order, as the backlash against Black Lives Matter has characterized the movement. Besides, what kind of social order prioritizes the survival of some over others?

White people are allowed to be authentic in their anger, but people of color aren’t. When Alec Baldwin gets upset because someone stole his parking spot, or when Brett Kavanaugh gets mad that someone would dare question his assumed right to get a seat on the highest court in the land, millions of Americans can sympathize with their plight. When black people want police officers to stop killing them at higher rates than average, they’re out of line and should get their priorities straight.

Speaking of women in public life, he writes:

Goldstein devotes a large portion at the end of the book to describing eight world leaders and explaining how each has a different “maximum likability in a particular trait” that makes them effective. Although he has strong values and beliefs of his own—which he’s not shy sharing—he does not impose them on those he profiles. His point is to explain how effective or ineffective they are based on their public perception and likeability. Goldstein is essentially pulling back the screen on the Wizards of Oz operating the machinery of public relations, explaining how it works and how it can be used.

A politician’s likeability ultimately determines how much power they can weild. A business leader’s likeability affects not only how she is able to work with those in her company, but is directly tied to the company’s performance and bottom line. A celebrity's likability will determine how much they get paid for performances and endorsements, how much the movies they act in will gross at the box office, and how much cultural influence they’re able to wield. Goldstein also explains how America’s movie stars and celebrities are some of our nation’s greatest exports, largely responsible for how much respect we command and soft power we wield in the world, making them potentially “more effective ambassadors of American power” than politicians. None of us is perfectly likeable, but we can become more likeable if we want to, and Goldstein gives us plenty of reasons and evidence for why we might want to try. 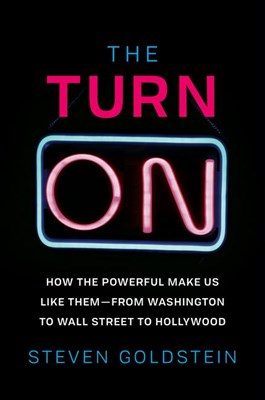