The two through lines of America (and any exceptionalism it may exhibit) have always been personal freedom and a commitment to the greater whole. They seem at odds with each other, but they are inextricably intertwined. 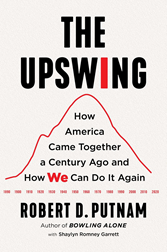 The Upswing: How America Came Together a Century Ago and How We Can Do It Again by Robert D. Putnam, with Shaylyn Romney Garrett, Simon & Schuster

We are less than two weeks away from an election that people across the political spectrum are calling the most important of our lifetimes. It is happening in a year of economic upheaval and job losses unseen since the Great Depression, and amidst a pandemic that has exposed and exacerbated inequalities across our economy and society. Businesses, and the people who work in and support them, are struggling. And, with COVID cases rising across the country, the challenges we face can’t be overcome with a simple admonition to open things up—even if we all know we must ultimately do so. We may be in for a long winter.

Many of the underlying issues contributing to the pain so far have been advancing mostly unchecked for decades. Income inequality has been rising steadily since the mid-1970s. Many blame immigration, international trade, or automation, and it may be true that the distribution of income has been affected by these factors (some more than others). But the economy has continued to grow overall throughout it all. The gains have simply not been as evenly shared as they once were. And that, in the words of Robert Putnam, is “fundamentally a political question, not an economic one.” In his new book, The Upswing (which he says will be his last), written with Shaylyn Romney Garrett, he writes of how:

The situation has only gotten worse in the last six months. As Aimee Picchi of CBS News (and so many others have similarly) reported recently:

The nation's 644 billionaires have enjoyed a staggering rise in wealth since the pandemic shuttered the economy in March, with the group gaining almost $1 trillion in total net worth, according to a new analysis. The spike in wealth coincides with what some economists are calling a K-shaped recovery, with the rich regaining their footing while poorer Americans struggle with lost wages and jobs.

Things are dire for many and, at best, precarious for most. They are good for only a precious few. This has been true for some time. And the challenges we face are not only economic in nature. Putnam and Romney Garrett have produced a book that is a structured, statistical, and scientific analysis of the troubling trends in our country toward increasing income inequality, yes, but also of our partisan gridlock, and the abandonment of cultural common ground and cohesive community in our increasingly individualistic and socially isolated era—an era that echoes the original Gilded Age so hauntingly that a six page description the authors give of it near the beginning of the book reads like a litany of today’s ills.

The book is not only about how we’ve arrived in our new Gilded Age however, but goes back over a century to show what happened after our nation’s last one. Yes, we have seen rising inequality for nearly fifty years now:

However, the more interesting and ultimately more encouraging tale we seek to tell begins a half century earlier with the first half of the inverted curve—the Great Convergence of the first two thirds of the twentieth century.

It is about how we made decisions as a nation at that time to build a more equitable society, and did just that for three quarters of a century before we took a turn back—beginning in the 1960s socially and, increasingly, economically since the 1970s—and have continued to regress since then. It is what they call the “I, We, I” curve, and they explain how it has manifested in our economy, our politics, our society, and our culture—devoting a chapter to each. It is also a reminder that it doesn’t have to be this way, that we should not except it as inevitable, or even normal:

To many older Americans today who lived through at least part of America’s upswing and then witnessed the extraordinary reversals […] the extreme inequality, polarization, social fragmentation, and narcissism of today—represented even in the highest offices of the land—are anything but normal. And thus they are understandably eager not to normalize it.

They also devote a chapter to race and a chapter to gender, and how even amidst the progress we made in the first half of the last century, it wasn’t evenly applied or achieved, and how we can and must do better this time around. It may be, in part, that those shortcomings led to our abandoning the progress that had been made. It is a reminder that:

Individuals’ freedom to pursue their own interests holds great promise, but relentlessly exercising that freedom at the expense of others has the power to unravel the very foundations of the society that guarantees it.

There was a great upswing in equality and personal freedom from 1930 until the 1970s, a Great Convergence. The upswing corresponded with rises in levels of education and union membership, in the size of our houses and how many cars we own. It also corresponded with greater social cohesion and stronger communities. Income inequality came down, and it had a generational effect. From around 1930 through the mid ‘70s, the share of the country’s total wealth owned by the top one percent dropped from a staggering 48 percent to 22 percent. It has risen back over 40 percent today. What does that mean for our future?

Wealth—not how much we earn in a year, but how much we accumulate over the years from savings and inheritance—has always been much more unequally distributed than income, because roughly half of all families have essentially zero net worth, in effect living paycheck to paycheck.

Whatever it means, we are all in this together, in this present moment. It seems silly that we continue to argue over wearing masks when wearing one enhances our own personal freedom to move about and function in the midst of a deadly disease, and proves our commitment to the greater whole, to not getting others sick if we’re unknowingly carrying the virus. Doing it is a sign of strength and confidence, not weakness. The argument that not wearing a mask makes us more free, or is a sign of strength, makes about as much sense as saying people should be free to hoard as much of the nation’s wealth as they can possibly accumulate, but that we will not ensure people are free from poverty. As Renee Hobbs writes in her excellent book, Mind Over Media, “Sadly, as we are seeing now in the public sphere, it’s far easier to divide than to unite.” That is probably true in terms of public policy that builds a more cohesive and mutually constructive society, as well, but we have done it before, and we can do it again.

The two through lines of America (and any exceptionalism it may exhibit) have always been personal freedom and a commitment to the greater whole. They seem at odds with each other, but they are inextricably intertwined—more like the roots we’ve put down in the soil than the pillars we’ve erected in our capital. But still, they will hold us up if we return to and nurture both.

Yes, we all know we need to open things up. We all want to open things up, but we are likely in for a rough winter, both economically and in the advance of this disease. The thing we most open up first is our hearts. We can and will get through, and reopen and rebuild our economy in a way that makes all of us whole individually, and a greater whole together.