The Year 1000: When Explorers Connected the World—and Globalization Began 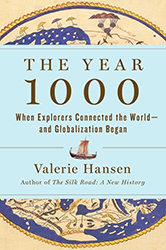 The Year 1000: When Explorers Connected the World—and Globalization Began by Valerie Hansen, Scribner

Research published this week in Antiquity detailed the rich archeological findings on a forgotten mountain pass near Oslo, revealed for the first time in perhaps 500 years as a warming climate melted the snow and ice that covered it. Scientific American picked up the story, which is where I found out about it, learning that the route was likely abandoned as the economic conditions in the region changed and trade slowed, “possibly brought about by the devastating plague of the mid-1300s,” leading me to wonder what may be lost, rediscovered, rerouted or otherwise in this new pandemic. At a mere four miles long, the road contained more than 800 artifacts, showing just how bustling it once was with trade. As the story in Scientific American notes:

Foot and packhorse traffic through the pass peaked around A.D. 1000, in the Viking Age, when mobility and trade were at a height in Europe, the researchers write. Mountain products, including furs and reindeer pelts, could have been popular with distant consumers, while dairy products such as butter or winter fodder for livestock could have been traded for local use.

You may be surprised to find out just how distant those consumers might have been in A.D. 1000. As Valerie Hansen suggests in her new book, it was then that globalization began, and it is tied to those very same Vikings. It was a time when the world was on relatively equal footing technologically, when trade was powered largely by human footing (that is, human feet) carrying goods overland—and as the mountain pass near Oslo demonstrates, even over snow covered mountains—which they traversed at much greater distances daily than we typically imagine they could today. But it was also a time when humankind unlocked the final secrets of the ocean’s tides necessary to connect the world when the Vikings reached Newfoundland, and potentially much further. It was that final connection, proposes Valerie Hansen in her new book, The Year 1000, that marks something special about the year.

Hansen explains how sea routes that traveled by ocean current had been established for centuries, and how the well-used route that took ships between the Persian Gulf and China was even twice as long as that eventually travelled by Columbus. In fact, if you account for the full trade route many took, and “add the leg from Basra, in Iraq, to Sofala, Mozambique, the route was three times as long as Columbus’s.” So the world was already largely connected, by sea and by overland routes like the Silk Road. What Hansen is proposing is that the Viking voyages to the Americas—the evidence of which she argues there is no doubt of—”connected preexisting trade routes on both sides of the Atlantic and so established the first instance of globalization,” a time when a good could have moved from one proverbial end of the Earth to the other.

Hansen uses that fact to take us on a journey around the world in the year 1000, from “The Pan American-Highways” that connected the various cultures indigenous to the Americas in trade to “The Most Globalized Place of Earth” at the time—China. She touches on every part of the globe along the way, answering questions you never even knew to have. Are the yellow-haired captives in the murals of the Temple of the Warriors in Mexico actually Vikings that were blown off course on their way to eastern Canada with Leif Erikson? Why are the language groups of Madagascar in East Africa, the Malay Peninsula, the Polynesian and Hawaiian Islands, and those indingenous to Taiwan all related? How did the silver in coins made in the Islamic Samanid and Abbasid empires end up melted down for use in Viking armbands? What connected the Mississippian culture centered in Cahokia in modern day Illinois to the Pueblions based in Chaco in New Mexico and the Mayans in Chichen Itza on the Yucatan Peninsula?

It is also the story of how the major religions spread and took hold in different parts of the world around the year 1000—patterns that largely hold today—as rulers adopted belief systems that allied them with other rulers, helped unite their subjects and strengthen their hold over them, and reinforced trade patterns and systems of taxation. You’ll learn why Christianity is split into Eastern Orthodox and Roman Catholic, how and why the Rus under Vladimir converted to Christianity and aligned with Byzantium, while the Khazars converted to Judaism and the Volga Bulgars to Islam, and how the temple states of Southeast Asia raised money.

You’ll also find that Chinese navigators who connected much of the world before the age of European exploration were operating on a much larger scale for a much longer time, and that in every area of the world they eventually landed, the European explorers of the 15th century weren’t establishing new trade as much as they were tapping into existing trade. As Hansen writes:

They didn’t start globalization; it was already in full force.

Long-distance commerce was already the norm around the globe. The Age of Discovery didn’t really discover anything so much as it rearranged it and reoriented the balance of power toward Europe. Or, if it did discover anything, it was the knowledge the indingenous populations held and their existing economic arrangements, which they then exploited. Just as the plague ended up closing the mountain pass near Oslo, the germs Europeans carried to the Americas—especially smallpox and the flu—wiped out much of the indegenous populations and changed those routes and connections dramatically, but they were already there when Europeans arrived. The world that has resulted is one of greater inequality technologically and economically than the one that existed in the year 1000, but we have also made much progress. The world described by Hansen is one in which slavery was commonplace, mass murder and human sacrifice was a matter of course, and disease ran rampant. That is not as true today. In fact, one of the technologies that allowed the British to colonize the world, beyond railways and cannonballs, was the “discovery that daily doses of quinine prevented malaria.” We will find our way out of this epidemic, and when we do, there is a lot to be learned about how we proceed, about how and why we need to remain “open to the unfamiliar” and to each other, open to trade and discovery, from the year 1000. 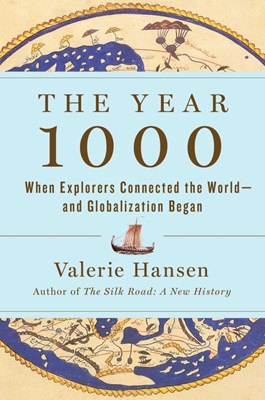 The Year 1000: When Explorers Connected the World--And Globalization Began