Treating People Well: The Extraordinary Power of Civility at Work and in Life

Lea Berman and Jeremy Bernard's book is about much more than their time as social secretaries in the White House. It is about how we can all work better together. You have probably heard a lot of talk recently about a sensational book detailing what it’s like to work in the highly politicized, pressure-cooker environment of the White House, and the views people who work there have of the president they serve. If so, it’s likely caused you some degree of anxiety, even anger—regardless of where on the political spectrum your views fall.

What if I told you that there was another book, also published this week, about working in the highly politicized, pressure-cooker environment of the White House, and the views people who work there had of the presidents they served, that would fill you with confidence in both yourself and your country? That this book is, in a real way, about the challenges we all face at work everyday, but from the unique and profound perspective of those whose faced them at 1600 Pennsylvania Avenue? That it would teach you how to overcome those challenges, how to project confidence, calm, and consistency, how to work well with others, how to read people, how to broach delicate topics, how to resolve disputes diplomatically, how to own mistakes (along with hilarious stories of their own), how to deal with difficult people, and how to do it all in a digital era? That book exists, and it was written by Lea Berman and Jeremy Bernard, the social secretaries to Presidents George and Laura Bush and Barack and Michelle Obama, respectively. And the refreshingly fundamental lesson it teaches most of all is that reflected in its title: Treating People Well: The Extraordinary Power of Civility at Work and in Life.

Having worked for presidents so politically inimical, people are surprised when they find out Berman and Bernard are friends, wondering: “How could two people from such disparate political viewpoints find anything to agree on?” The question is a sad reflection on the current state of political dialogue in this country, but their answer to it is the antidote to the growing pessimism and hyper-partisanship we find ourselves immersed in. It is a view that is perhaps most entrenched in Washington, D.C., where it can be hard to maintain friendships with anyone on the other side of the aisle, who are seen as political opponents or implacable enemies in the game of politics rather than fellow citizens involved in the ongoing experiment in self-government that brought them all to nation’s capital. Berman and Bernard explain why they believe it’s important to persist in spite of that personal political pressure:

[W]e stay connected out of a fundamental belief that we both want what’s best for the country and that we can find a way to get there by working together rather than against each other.

And, although you may disagree with the policies of either administration, the way they operated in the social and diplomatic sense was almost identical:

The Bushes and Obamas are more similar than you might think. Even when their political opponents were harshly unfair, they took the high road because they understood that each president sets a tone for the nation, and that no matter what challenges they faced, they stood a better chance of surmounting them with steadiness, restraint, and decency.

The book isn’t just two social secretaries gushing over their respective first couples, though. It is not a business book, per se, but it is a book that gets right down to business, detailing how they navigated one of the most pressure filled, politically charged jobs there is. “Everyone has momentous projects at work,” they write, “occasions that require massive coordination, preparation, imagination, and luck.” Their momentous projects just happened to occur on almost daily basis, and included planning state visits, hosting world leaders, and overseeing events at which every detail being overseen was politically delicate—potentially explosive.

There are twelve chapters in the book, each examining a practice that is a “cornerstone of treating people well.” And this is not one you want to skip around or pick up anywhere, as each practice is built upon its predecessors, and informs the next. It all starts with personal confidence—which they both struggled with as socially anxious children. Bernard struggled with severe dyslexia, as well, and Berman tells us a major motivation in taking the social secretary position was to prove to herself she could finally overcome the social anxiety she’d “considered a lifetime failing.” (Entertaining the world’s most powerful and famous people in the epicenter of global political influence does not sound like something I’d want to take on to prove to myself that I’d conquered my social anxiety, so I’ll just chock that one up to her being a more ambitious than I am.) Explaining how they honed each trait and put it in to practice, and how you can do so, it becomes clear these are not necessarily traits we are born with. These are all learnable skills, and they provide concrete steps to take and helpful reminders for building and sustaining them. Even humor and charm—the topics of Chapter Two and qualities we generally assume people either have or do not—can be learned.

The authors use anecdotes from their time in the White House, along with a healthy dose of examples from previous presidents and the history of the White House, to draw these lessons out. They are filled with wisdom, generosity, and (perhaps most of all) real world, street smart, common sense. “Being prepared is a form of consideration.” “Being consistent is a form of thoughtfulness, especially with the people you care about the most.” I could fill a whole review with wise one liners like that.

People play politics at every job, but what if playing politics were literally your job? That, in essence, is the job Lea and Jeremy had, and their book about it clearly shows that it doesn’t have to be—shouldn't be—a negative and nasty thing. Most people equate politics with underhandedness and dirty tricks. And that is often a reality. But politics is also about aligning interests, fruitful collaboration, furthering goals, and making progress. Done honestly, it is not about greasing palms, but exhibiting graciousness and warmth even in the midst of navigating cold, hard, political realities. It is about consistent civility, and keeping commitments.

Lea and Jeremy write that:

If bad behavior is contagious—and many studies have shown that it is—we’re in an epidemic.

But epidemics end. And another of their twelve practices—listening to others—may be key to ending our current epidemic of bad behavior and toxic partisanship. Lea and Jeremy note that:

There is an established correlation between listening and leadership; the best leaders listen more than they speak and often allow others to come to conclusions on their own simply by asking the right questions.

And, on a personal level, they believe that “To be a good listener is to be a good citizen.”

We can’t grow, or fix long-standing problems, if we only listen to the people with whom we already agree.

Think about that not in the abstract, but in terms of where and how you live and work every day. How does it apply to coming up with solutions at the office, in your family life, or in the community. The authors offer immediately actionable, utilitarian advice down to the level of how to plan your workday, but it is always rooted in a broader worldview and morality. It is about leadership, and how to lead yourself, and the knowledge that the work you do every day is a part of the larger whole. Discussing their bosses—both leaders of the free world—and the behavior they witnessed them exhibit every day, they write:

Understanding that their words and actions carried unique emphasis and power, our bosses treated their entire staff, whether it was a member of the cabinet, an advisor, or a housekeeper from the residence, with the utmost respect. […] We came to know what to expect from them because their reactions were reasonable and dependable.

We are political animals, and we all have to navigate that reality every day. It doesn’t matter if it’s in the oval office, the corner office, or the principal’s office: done right, it is about treating people well. We simply get more accomplished when we do. 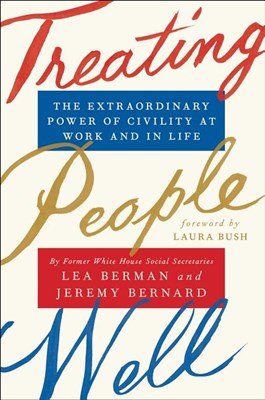 Treating People Well: The Extraordinary Power of Civility at Work and in Life