Under New Management: How Leading Organizations Are Upending Business as Usual

David Burkus provides us with a great list of seemingly heretical ideas to make out businesses more efficient. Everybody seems to be deriding Frederick Winslow Taylor and his “principles of scientific management” that dominated the industrial age lately. At the beginning of his new book Under New Management, David Burkus gives him his due, telling us that “Taylor’s concept of scientific management came at exactly the right time” and “provided the tools to manage people” in the factories that powered the Industrial Revolution.

His ideas dramatically increased the speed and efficiency of production and helped companies grow. There are even those who say that the amazing economic growth of the twentieth century stems largely from Taylor’s management ideas and the ideas they inspired.

There is a “but” to that statement, and it makes up the rest of the book. Because, as we’ve moved from rote industrial work to knowledge work, in which originality, creativity, and individual initiative are more important than uniformity and conformity, those ideas tend to impede progress rather than promote it. Unfortunately, there hasn’t been a great movement away from Taylorism in the workplace.

Under New Management contains 13 chapters, and each is dedicated to either upending an existing practice or paradigm, or entertaining a new one. It starts with a bang, imploring organizations to “Outlaw Email.” There are examples of companies that have done away with it entirely, companies that have simply removed internal email, prompting employees to communicate directly instead of distractedly, and examples of those that simply ban email after hours (and go so far as to shut their email servers down so employees can’t check their email after hours. In each case, studies have shown that the practice of eliminating email or limiting it decreases stress and increases productivity in the workplace and at home.

The second chapter’s heretical stance is to “Put Customers Second.” We have all come up in business with the mantra that “the customer comes first.” Burkus explains how focusing on meeting employees’ needs first enables those employees to more enthusiastically (and profitably) meet the needs of customers. This not only requires putting employees before customers, though, it requires turning your entire hierarchy upside down. Speaking of an Indian technology firm that made such a shift, Burkus writes:

Three years later, HCL Technologies was ranked as the best employer in India, had almost tripled revenue, and doubled its market cap—all from turning their hierarchy on its head and focusing on what management could do for employees rather than the other way around. If you want to go one step further, one of the more radical ideas in the book, which come in one of the final chapters, is to “Fire the Managers” altogether, and to flatten the hierarchy.

Another great story from this chapter details how Howard Schultz made Starbucks shareholders furious when he refused to cut employees’ steep $300 million benefits package, and instead focused on retraining those employees and giving them the support they needed. That support and focus eventually turned the company around and Starbucks earned $16.4 billion in 2014. Shareholders were no longer howling, demonstrating that a focus on employees will benefit shareholders in the long run, while focusing on shareholders does not offer a reciprocal benefit.

One of the most interesting things I learned in the book is where the vaunted “unlimited vacation” policy at Netflix came from. I have to admit I’ve always been a little more than skeptical of such policies, but I left the chapter on how to “Lose the Standard Vacation Policy” much more inclined to the idea than when I entered it. Before going public, Netflix employees operated on an honor system, “keeping track of the days they took off and letting their managers know when and how many they took.” It fit a company in which “most people weren’t working standard nine-to-five hours, or even the standard five days a week.” When they went public, however, their auditors said that such an honor system did not comply with Sarbanes-Oxley and they’d have to account for that time-off more rigorously. It was an observation from a Netflix employee that convinced Reed Hastings to go another route:

Hastings researched the law and found that there is no requirement for how much vacation time salaried employees must receive or how they take it. So, instead of formalizing the policy, they did away with it altogether. So, rather than the “unlimited vacation” policy we’ve all heard about, to comply with regulations, Netflix officially has no vacation policy.

Netflix employees take as much time as they feel they need and inform their manager when they’ll be gone—but they don’t track how many vacation days they take each year.

It has worked so well for them that they now offer unlimited parental leave, allowing new mothers and fathers to “take off, move to part-time, then to full-time, and even back to time off, as their situation dictated … all while being paid normally.” They’ve also scrapped their old, more formal travel and expenses policy for a new, five-word policy: “Act in Netflix’s best interest.”

As with vacation days, the idea is to expect adult behavior from employees, then deal with those that can’t act like adults without burdening the majority.

Rather than making it a mere economic exchange, such policies encourage a culture of trust and an expectation that employees act responsibly.

Perhaps Hastings and McCord said it best in the [company’s Reference Guide on Our Freedom and Responsibility Culture] slide deck: “There is also no clothing policy at Netflix, but no one comes to work naked.”

What solidified the efficacy of the idea in my mind, however, was the last example in the chapter. Because, if you thought as I did that this policy can only be applied to a technology company like Netflix where people can work remotely and hours are more flexible, consider the case of Windsor Regional Hospital in Windsor, Canada:

Windsor Regional adopted the policy for two reasons: employees were not taking enough time off, and vacation days had begun to block recruiting efforts—the hospital could offer new employees only limited benefits because they feared upsetting longer-tenured employees.

David Musyj, the CEO of the hospital, and other senior leaders saw unlimited vacation as an opportunity to overcome those challenges and create a more engaged and trusting organization. When it was first announced, the policy was met with some skepticism. Some employees feared they would lose their vacation time, while others feared the policy just wouldn’t work. A tech company in Silicon Valley is one thing, but a hospital that depends on having the right number of specialized employees staffed on every shift is a lot more complex. Musyj and his team worked to allay these fears and emphasized that the intent was to get employees to take more vacation and to work with each other to make sure everyone was supported when they were working. And it worked.

Since the policy was enacted, “Keeping the hospital running is seen as a team effort” which has not only improved the relationship between management and employees, but between the employees themselves. In discussions I’ve had with friends and coworkers about unlimited vacation time, most have agreed that it seems like a backdoor way to limit the number of days someone will take. Perhaps the proper system is not to mandate a limit on the amount of vacation an employee can take, but how much they must take.

And speaking of time-off, one study revealed that people who work in open office environments took 62 percent more sick days than those in private offices, which is just one of the many reasons there’s a chapter advising management to “Close Open Offices”—though another study suggests that it may not be whether an office is opened or closed, but “how much control companies allow employees to have over where and how they work.” And I’m only scratching the surface of the book here. The ideas and chapters I haven’t even mentioned include:

Like Frederick Winslow Taylor, Burkus is interested in the science behind each of the decisions made in business. He may not be standing behind a line worker with a stopwatch, but he shares a wealth of research behind each of the ideas he offers. Whether they could or should be applied in your organization, and to what extent, depends on you and what kind of organization you’re running. Unlike Taylor, however, who was figuring out how to get human beings to most efficiently run the machines of production, Burkus focuses on how to get the machines and machinations of production to most effectively serve humans and make them, and the organizations they exist in, more productive. 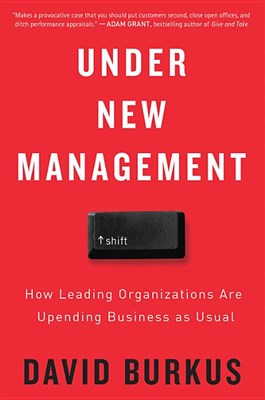 Under New Management: How Leading Organizations Are Upending Business as Usual