Utopia is Creepy: And Other Provocations

Nicholas Carr reminds us that digital utopianism is just like all the utopias that came before it—unrealistic and a little creepy. “Now, some people have asked why we would remove the analog headphone jack from the iPhone. It really comes down to one word: courage. The courage to move on, do something new, that betters all of us. And our team has tremendous courage.”

With the hyperbole of that announcement yesterday, you’d think Apple making the decision to remove a hole from their iPhone was on par with storming the beaches of Normandy. The decision they made wasn’t to further lock us out of their iconic device, it was to liberate us from the tyranny of the connecting cords that entangle us. It wasn’t a crass commercial decision made by a large multinational corporation, but a courageous move that “betters all of us” somehow. And while I would actually welcome less cords in my life, the Silicon Valley digital utopianism of the announcement, the smug and paternal assuredness that they know what’s better for all of us, felt overblown and a little creepy.

No one takes on that paternalism and digital utopianism more savvily or sardonically, with more energy and erudition, wit and humor, as Nicholas Carr, and he’s been doing it for over a decade at his blog, Rough Type. His new book, Utopia is Creepy: And Other Provocations, is a collection of his Rough Type posts mixed in with other essays and aphorisms he’s written over that time.

There are some things included in the book that were very hot topics at the time they were written that I had completely forgotten about. Apparently, Second Life is still a thing, though I wouldn't have known that had I not looked it up after reading Carr's post on it, and I think the debate on the possibility and implications of trying to make a real-life living there has faded. Posts like those are a good reminder of just how quickly the debate and landscape has shifted over the past ten years. Other posts feel just as current as when they were written, such as this insight from December 19, 2006:

The members of social networks may think that they’re just “sharing” their thoughts, interests, and opinions with other members, but actually they’re working for the companies that operate the networks.

That is still a little-understood (or perhaps greatly ignored) reality about the time we all spend on social media. We may think that the service that they provide is worth the work we do for them, but the simple fact of the matter is that they’re monetizing the time we spend there, and we don’t share in the actual profits of that part of the online economy. While we’re working blissfully in the attention economy they provide, Carr reminds us, the overseers of the site “operate happily in a cash economy” with the information they glean from our time there.

Some of the entries are long, full of historical asides and delightful digressions. I tend to like those best, but I can't argue with the short, pithy offerings, such as the one entitled “Facebook’s Business Model.”

The desire for privacy is strong; vanity is stronger.

Reflecting on parents' concerns that social media is a dangerous place for their children in a post on “MySpace’s Vacancy,” he laments that the thing that scares him most about the platform is “not how dangerous it is, but how safe.” He laments the commercialism, conformity, and sameness he found there, and it's insularity. Countering an argument made that MySpace is similar to a bicycle because kids can get hurt on both, he writes:

Maybe I'm misremembering, but I think my old banana bike was a pretty wholesome toy, even with the mile-high wheelie bar. Riding it around the neighborhood with my friends was a way to get some exercise and some fresh air, to see things in three dimensions, to escape "my space."

A post on "MySpace’s Vacancy" would probably mean something very different today, of course, in that it turned into a virtual ghost town alongside Friendster, both hopeful frontier towns of social media before losing their population to Facebook—now an online megalopolis that younger, hipper folks visit to keep in touch with grandparents, aunts, and uncles, before returning to the their Snapchats and Instagrams—the Brooklyn and Portland of social media addresses.

But it’s about more than the shifting real estate of the web, it’s about the way we navigate around in it. Speaking of the nature of serendipity on the web, he writes:

Serendipity should be a doorway, a portal to elsewhere, but on the web it’s a kitschy picture stuck on your refrigerator with a magnet in the shape of a banana.

Our everyday life and work is now so connected to the internet that most of us can’t imagine or lives, or how we'd do our work, without it. And when the kind of serendipity we experience is more shallow because of the tools we use, when that serendipity isn’t leading us to deeper work and deeper connections, and dead-ends instead at a funny cat video, then it necessarily affects the quality of the life we're living and work we’re producing. A good craftsperson never blames their tools, and there is deeper content to be found throughout the web, but is not in the easy, shallow links so prevalent throughout the internet that takes our attention off to… “hey, look, a blue car!”

A full decade after TIME magazine declared “you” as the person of the year during the rise of Web 2.0 and user-generated content online, even declared us “the engaged citizens of a new digital democracy,” it has become clear that many of the hopes for that incarnation of the internet were never met.

The web turned out to be more about commerce than consciousness, more about mall than commune.

Carr writes with a moral and historical clarity that is broader and more encompassing of the full human experience than the digital utopians' vision. He doesn't shy away from philosophical arguments; he takes them on and makes his own in a way that is simple to understand and more tied to our beautiful messy reality than any hope of living in a utopian virtual reality. When he encounters Ray Kurzweil’s utopian idea that “the means of creativity have been democratized” by digital technology and the internet, he reminds us of the pencil and the saw, two equally (and more accessible) technologies that also "democratized" creativity and production. It’s a strong argument that, while many of the tools Silicon Valley offers are very useful, it’s mythology is false, and perhaps even dangerous.

I think Utopia is Creepy is a perfect book for the moment. It reminds us that, when it comes to the iPhone 7 and the liberation mythology surrounding its announcement, we as thinking individuals still have an ultimate advantage: we don’t have to buy it. 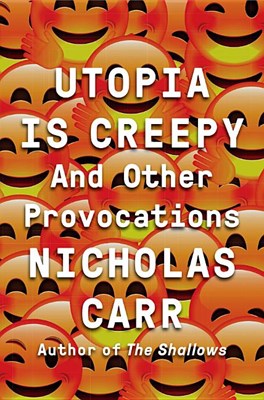 Utopia Is Creepy: And Other Provocations