Weird: The Power of Being an Outsider in an Insider World

The time we are living through feels extremely weird. Maybe a book on the strengths of being weird can help us through. 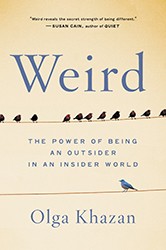 Weird: The Power of Being an Outsider in an Insider World by Olga Khazan, Hachette Go

Olga Khazan’s book tends to meander, but in the most meaningful of ways, like a conversation with an old friend that lasts into the early morning—just as my reading of the book did.

Like some of my favorite fiction, it has a cast of characters whose stories get updated as they reappear throughout the book, but these are real people, and their stories are mixed in with a look at the science of why we feel unsettled—even viscerally and violently opposed to—people with different beliefs and identities. Ultimately, though, it is about how being weird can benefit those who are different, the places in which they work, their communities, and society as a whole.

Weirdness can be, in Khazan’s words, a “superpower” or a “jetpack.” It means you have something unique to offer, a different perspective to bring to bear. Dissenting voices and nonconformists challenge otherwise homogenous groups of people to come up with more creative ways to approach a problem, and we sure do have some problems that need addressing right now.

So, what can a male early-childhood education teacher, a female Nascar driver, a transgender mayor from West Texas (actually, a whole lot of folks who either didn’t or still don’t easily fit in easily living in Texas, including a smalltown feminist sociology professor, a Black Muslim immigrant from Africa, and Khazan herself), and a whole chorus of others teach us about being and thinking differently? As it turns out, a whole lot, opening our eyes to the struggles and the advantages of doing so in the process—and, I don’t think I’m being too hyperbolic—the real, diverse beauty of humanity. To put it more simply, as Khazan does:

Being different from other people around you confers hidden advantages that can help you in life and in work.

I don’t want to lessen the richness and variety of the individual stories she connects to and relates in the book, including her own, by trying to pull any into this review. What I will say is that she more broadly dissects the difference between how “loose” and “tight” cultures treat nonconformists in a way that takes us all the way back to our hunter gatherer ancestors—who many researchers now suggest were on the whole more welcome to outsiders, who traded and interacted with and even joined other groups freely—and brings us up to date on the most recent psychological, sociological, and neuroscientific research on how we perceive and react to the differences among us. Taking us back, she writes of how there is “little evidence that we waged war until about ten thousand years ago,” and that the rise of civilization itself may have been what first began to divide us:

Warfare, according to some scholars, has actually increased since “civilization” took hold. Even as society grew supposedly more sophisticated, humans were becoming more ethnocentric and parochial.

The struggle then, is to preserve the benefits of civilization while removing the barriers that divide us. We have made that progress in fits and starts ever since. Khazan gives us, for example, a brief but eye-opening history of diversity efforts in the workplace, and how nonconformity itself often ends up becoming a social trend:

Indeed, we seem to always find a way to hammer every nonconformist impulse into just another norm … In its famous “1984” ad, Apple promised to literally break you free from a monotonous dystopia, but as [Micki McGee, a sociologist who has studied the history of self-help literature] pointed out, “when every single person has an iPhone, how is that being different?”

There is a close-to-home digression into Trempealeau County here in Wisconsin, one of the counties in America that voted for Barack Obama in 2008 and 2012, and switched to Trump in 2016. A lot has been written about such counties in the popular press, and I don’t usually find such pieces very interesting or informative. But those pieces don’t usually focus in on the experience and tell the stories of immigrants in those communities the way Khazan does, or the idea that it is the arrival of immigrants in greater numbers that may have made such places more illiberal and reactionary, or the evidence that suggests that “we don’t want to safeguard our jobs so much as our norms.” The trouble is that:

Even more troubling is a 2014 study by Tulane psychologist Damian Murphy that tried to determine why some countries tend to account for far more patents, Nobel laureates, and innovation. What he found is that one of the factors that had a detrimental effect on a country’s overall creativity was the level of various infectious diseases that had hit the country. Fear makes people more conformist and more conservative. There is, for instance, a relatively new idea in psychology of a behavioral immune system. It may point to the reason for rhetoric describing immigrants and other outsiders as “animals” or “parasites,” and their arrival or presence as “polluting.” It may be why we seem almost sickened by others' political beliefs. It is, of course, not new, but it is alarming enough that, as Khazan notes, “actual political partisans are writing books about how we need to put an end to all the partisanship.” While there is no scientific consensus around the theory, she writes that:

For some of the nonconformists I interviewed, there was a noticeable pattern of being avoided—almost literally—like the plague. Their ideas seemed to, frankly, gross out their neighbors. These days, “catching the gay” is an outdated joke about bigots, but for some outcasts, it still feels as though their peers fear being infected with their ideas. They spend their lives being kept at a distance by others’ behavioral immune systems.

For all of the larger perspective, there is a lot of personal pain in the book. Being weird isn’t easy. Khazan’s story of the first time she was asked out by a boy almost brought me to tears, and not in a good way, because she was really excited, and he turned out to be joking. For those that are weird, the sting of being different is more than mental. Loneliness has been proven to lead to multiple health problems.

One researcher found that lacking social connections is as harmful as smoking fifteen cigarettes a day. Loneliness is deadlier than obesity, and it increases the risk of dementia.

Feeling injured socially, in fact, leads to inflammation in the body in the same way physical injury does. But it can also poison our minds. At its worst, feeling excluded by society and alone can lead people to join gangs, terrorist and hate groups, which leads to more social division, more violence, and more pain in society.

There is already too much pain in the world right now. Indeed, now that an international health and economic crisis has caused our “normal” to be suspended, perhaps we will be able to see more clearly and empathize with the large swaths of our fellow humans who were already in crisis, those who were already struggling. Khazan makes sure she is not equating being considered “weird” with systemic injustice, noting that:

Being laughed at by preteens and being discriminated against for centuries are simply not comparable experiences.

There are systemic, horrific problems in our society that the tools of psychology are not equipped to address. The fact that marginalized people have learned to cope with some of them does not mean the fight for equality should ebb.

But the understanding of nonconformity and the differences among us she offers could help us address how we proceed from here. Maybe, conversely, looking at how “weird” people and those that are considered “others” adapt and find success can help us all learn to get out of this. As she writes:

Often, what leads to innovation are, precisely, norm-violating, nonconformist ideas.

The time we are living through is itself extremely weird, but normal wasn’t working for a lot of people, perhaps most people—perhaps even those that were deemed successful and normal people. Things are going to change. Hopefully, we can use that fact to make things better, come up with new norms, set new trends. Rather than poisoning our minds with division, we need to connect and stay open minded and open hearted. If you are weird, if you’re struggling (and we all are), it’s also helpful to try to get outside of your comfort zone and try to see things from another perspective. Reach out and connect to someone however you can. Others can help, you can help others, and together, embracing each other and our differences and all this weirdness, hopefully we can help heal the world.